With Super Rugby Aotearoa due to kick off this weekend, and Super Rugby AU still aiming for the first weekend in July, there’s no coincidence that the closed competitions will take the opportunity to try a few law variations.

New Zealand Rugby didn’t muck around, announcing a couple of variations that will undoubtedly change the game.

The allowance to replace a red carded player after 20 minutes will have huge implications on rugby going forward. You can almost hear the keyboards bursting with anticipation, waiting to punch out the first article explaining how a game wasn’t ruined by a red card, especially if said card comes well before halftime, a la Scott Barrett in the Bledisloe Test in Perth last season.

The allowance does what it says on the tin. A player issued with a red card is still sent from the field, and still cannot take any further part in the game. NZR even went to the length of clarifying that the dismissed player will still face the standard Super Rugby judicial process.

On the surface, foul play is still being dealt with the same way. And the player responsible for the red card will still face the same disciplinary process afterward. At the time of the incident, and for twenty minutes thereafter, the opposition team will still have a numerical advantage from which they will be looking to benefit.

But it will be when the offending team is allowed to send the replacement player onto the field that will be the focus of the articles.

We’ll quickly find out whether opposing teams, coaches, and fans alike like the idea of facing a full XV after a red card, especially if the player on the receiving end of the red card-worthy foul play is also unable to take any further part of the game.

Just as there will be commentary around the contest being restored and the game uncompromised, there will also be commentary on whether it’s right that a team losing a player to an act of foul play should be penalised for doing nothing wrong.

Already, it’s being reported that Rugby Australia will carry this variation over into Super Rugby AU.

It’s unclear if Australia will follow New Zealand’s golden point trial at this stage, though no doubt they’ll be keeping an awfully close eye on things when the trial begins this weekend.

I have to admit, I’m a bit ambivalent about this move. I get the motivations, and I even get the potential for what would likely be very exciting finishes. But it also feels a bit like the answer to a question no-one asked.

In New Zealand derbies, yes, there were three draws last season alone. But there has only been one more draw after that going back to 2011.

In fact, there have only been nine New Zealand derby draws in Super Rugby history, and two of them were because of match cancellations; after the Christchurch earthquakes in 2011, and again after the mosque shootings in the Garden City last year.

In all Super Rugby matches since the competition began in 1996, the number of drawn matches is just 52. I’m not sure two drawn games per year is that big a problem.

In Australia, a Sydney Morning Herald report late last week outlined that along with the red card replacement, the line drop-out and 50-22 kick variations used in last year’s National Rugby Championship will carry forward into the new Super Rugby replacement, assuming of course, the competition gets the final go-ahead.

On the whole, these worked pretty well in the NRC, though I still don’t like the 50-22 opposite allowance, which allows teams pinned in their own 22 to kick and hope, and then regain the ball via attacking lineout if they happen to find touch on the bounce inside the opposition half.

I wrote a couple of articles on these variations during the NRC, and my position hasn’t really changed.

The 50-22 kick worked exactly as it was intended: rewarding tactical kicking from teams on attack on their side of halfway, and setting up further attacking opportunities via set-piece. Additionally, it forced defensive sides to play a much better positional game at the back, often forcing shorter defensive lines up front.

Why wouldn’t the 22-50 kick similarly reward tactical kicking, I hear you ask? Well it can, and it did, on the very rare occasions it was attempted. But more often than not, it came from speculative box kicks from the back of a 5m scrum, or worse, a couple of pick and drive rucks to edge closer to the 22, and then hope for a lucky bounce.

On paper, it can reward tactical defensive kicking; in practice, it was seen as an easy out with nothing to lose.

The line drop out, rewarding the defending team if they were able to hold the attacking team up over the line, was brought in as a faster way of restarting play – rather than an attacking 5m scrum and all associated resets – and it certainly did that. It also forced a lot more accuracy from the attacking side if trying to score via pick and drive. 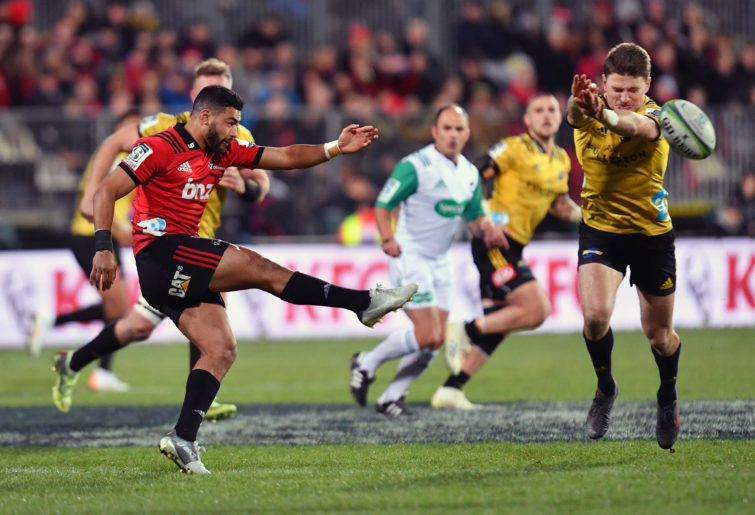 What will the new rules change about rugby tactics? (Photo by Kai Schwoerer/Getty Images)

Western Force coach Tim Sampson raised a really interesting question during last year’s NRC about this variation that still hasn’t been addressed, however.

“If the attacking team has a dominant rolling maul, and they maul from ten metres out and get held up over the line. They shouldn’t be punished for good execution by losing possession,” he offered. It remains a very good point, and it’s hard to disagree that they shouldn’t be.

But the intent of the variation – faster restarts, and more ball in play – was certainly realised, and no doubt that’s why it will carry over to Super Rugby AU.

What will be interesting in all these variations on both sides of the ditch, will be when the broadcasters start comparing notes.

If they find that the variations are producing games that are more engaging and contests that are more absorbing, then even without a sudden upsurge in ratings, they might see enough in the product that they can get behind as a product not just worth showing, but worth actively promoting.

That’s what leads to healthy conversations with governing bodies, and what leads to increases in the value of broadcast rights – especially if the Super Rugby product that SANZAAR keeps wanting to remind every of simply cannot be delivered in its contracted format.

If the broadcasters on either side of the Tasman find common ground in which variations can produce the best rugby product, well that’s a strengthening of the business case for a new competition right there.

And that’s why the rugby played under these law variations for the next few months could be fascinating on so many levels.