Like a TV drama returning from a mid-season cliffhanger, we are back: continuing the story of the 2020 AFL season in media res and with a handful of new plot points thrown into the mix.

The big question of course is will this really be like a TV show, where things go back to normal within 44 minutes (or close enough to it), or is it real life, and has the game we love been altered forever by the impacts of COVID-19?

Since the league was suspended on the Sunday of Round 1, the vast majority of media discussion has been around the shutdown and the roadmap back from it.

Earnest discussion of the nitty gritty of football has been so rare you could be forgiven for having forgotten we are re-entering a season where the old narratives of coach contracts, trade talk and a premiership to be won are still tales to be told.

So like any good TV drama it’s time for a quick recap at the start of the episode – a delicate art form of yesteryear that Netflix binges and the skip button have mostly made obsolete.

The year started with only two of the AFL’s senior coaching cohort coming into the season under serious pressure to retain their jobs.

Simon Goodwin may have led Melbourne to a prelim final only 18 months ago, but the Demons’ despicable performances in 2019 quickly eroded whatever credits he had stored in the bank.

At the start of the year I would have said there’s no way he could survive a similar series of results in 2020. But the impact – particularly financially – of COVID-19 may prove a saving grace.

Goodwin is contracted for another two seasons to follow after 2020, and while the financial size of that deal will likely need to renegotiated (as would be the case at every club), one would expect the length of tenure will not be.

Every club is taking a major hit financially already this year and while paying out two seasons of a coaching contract might have been a hefty but affordable blow to cop pre-COVID, I suspect that’s no longer the case.

The situation of Ken Hinkley, on the other hand, is a little different. The Port Adelaide coach is out of contract at the end of this season, unless he is able to guide his team to finals and trigger a one-year extension.

Having previously declared it was finals or bust for his senior coach, Port Adelaide president David Koch had the following to say in April.

“As far as I’m concerned, Ken will be coaching next year because we’re incredibly confident of the team that we’ve got now going forward,” Koch said.

“The work that he’s particularly done in the last two years, in terms of building our list, we could not be happier with. And so I’m extremely confident that Ken will be coaching next year.”

That would seem a fairly strong commitment, but talk is cheap in footy – and it may only be an indication of just how confident Koch is in his expectation of a finals campaign in 2020.

Meanwhile, in Victoria, Essendon entered the year having a 12-month deadline by which to convince their perennially injured want-away star forward Joe Daniher to renege on his request to join Sydney and commit to the club with a new contract.

Daniher is only the most prominent of a host of players whose contracts will remain in limbo for the foreseeable future, as the AFL has banned clubs from lodging any new player deals.

The ongoing financial landscape simply remains too uncertain at the moment for new contract agreements to be at all wise – clubs don’t yet know how many players they’ll be able to retain on a list, let alone how much salary they’ll be able to spread between them.

The bad news for the Bombers is that Daniher still appears some distance from returning at AFL level. He has begun running laps and doing some light kicking at training, but nothing more strenuous than that.

He won’t have the option of playing at state-league level to regain match fitness either, although the AFL has given clubs permission to organise scratch matches with each other during the season.

Some have predicted that the likely significant changes to the AFL’s collective bargaining agreement will mean a flurry of activity come the trade period. I’m not so sure.

Most big-name player moves are the result of months or even years of planning, and right now clubs simply don’t have enough information to be working on deals of that nature.

Meanwhile, the smaller deals in which fringe players seek a change of scenery could go the way of the dodo if clubs are left operating with only 35 or so players on their list.

I’m talking about moves like that of Lewis Taylor to Sydney or Marc Pittonet to Carlton from last year’s trade period. If clubs are given fewer dice to roll, will they still be rolling them here?

But of course, the question that always seems to get lost in all the others around footy remains: who is actually going to win the thing?

My view is that the restrictions in movement placed upon clubs by COVID-19 will benefit those who came into the year with some continuity, and hinder the sides that didn’t.

Take a team like St Kilda for example. They are trying to integrate five new trade recruits into their best 22 while also learning a new coach’s game plan. Their performance in Round 1 showed that this is still a work in progress.

That would be a challenge under regular circumstances, but one that a club has ample opportunity to address over the course of a 22-game season. In 2020, with a shortened season and restricted training group sizes, it appears a fair greater mountain to climb.

Adelaide, Carlton, Fremantle, Essendon and North Melbourne all find themselves in their first year under a new senior coach (or close enough, in Essendon’s case). It doesn’t mean a fatal wound to their seasons, but it will prove a challenge that some will overcome and some won’t.

West Coast and Geelong find themselves on the opposite sides of a coin – the Eagles trying to redesign their midfield around the addition of Tim Kelly, the Cats looking to fill the hole he left behind.

West Coast – along with Fremantle, Adelaide and Port Adelaide – have also been handed something of a double-edged sword in that they’ll spend at least the next four rounds playing on the Gold Coast.

While that’s not ideal, they’ll still hold something of an advantage against the clubs who travel to face them, while only being required to expend one home game over the time period.

That means they’ll get extra home games to make up the deficit at the back end of the year. If they perform well on the Gold Coast, they’ll find themselves in a great position to finish the year strongly. The WA teams are also reportedly a candidate to enjoy their own ‘hub’ later in the year.

And I suspect those clubs who possess the most stability coming into season 2020 – Richmond and Collingwood probably the two clear standouts – will benefit too.

These are teams who’ve performed at a high level in the last few years and don’t have any drastic changes in coaching, playing personnel or location to get their heads around. They bring some certainty with them into uncertain times, and that should be a boon. 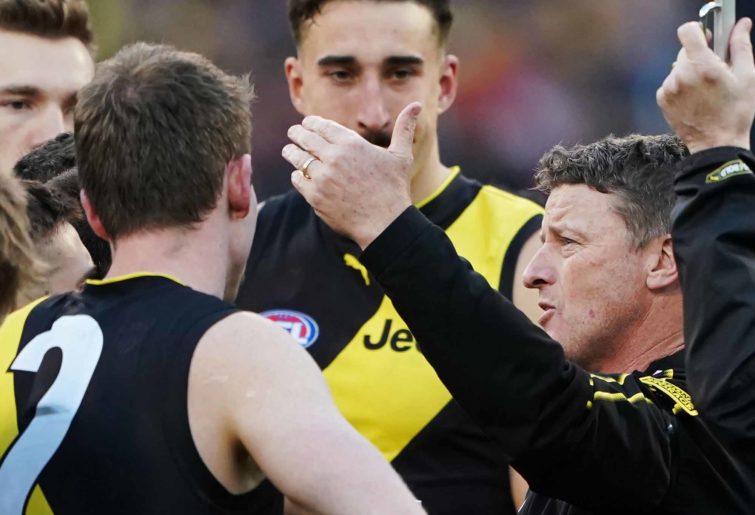 As for the matter of long-term impacts on the game, an old saying is relevant: it’s difficult to make predictions, especially about the future.

But if I’m musing upon my crystal ball for a moment, my gravest fear is that the financial fallout from COVID-19 will drive a further divide between the AFL’s rich and poor clubs.

Caroline Wilson suggested on a recent episode of the Real Footy podcast that in a renegotiated CBA it could be a real possibility that clubs will be allowed to pay one or two marquee players outside the cap.

It’s understandable that the AFL’s top-line players are seeking a way to ensure that they can still chase seven-figure salaries – but this simply cannot be allowed to happen.

Still, normal football operations – or something roughly approximating them – might not be that far away. Compared to nations abroad, Australia has copped only a light graze from COVID-19, and if we remain vigilant and wary of the threat of a second wave, that will hopefully remain true.

News was broken just yesterday that a small crowd will be allowed to attend Round 2’s Showdown, while crowds are retuning to the NRL this weekend also. Barring a setback, we should hope to see supporters back in greater and greater numbers as the AFL season goes on – something which seemed impossible not that long ago and would be a significant boost to clubs’ balance sheets.

But I am – believe it or not – neither an epidemiologist, nor an economist. I’m simply an avid footy fan, excited to watch the next episode of Australian Football League.