What is the main characteristic of the Glasgow Warriors?

If you ask anyone at the top end of the European rugby tree that question, they will more than likely reply with “aggression and intensity at the breakdown”.

It is a characteristic of teams coached by Dave Rennie in particular, and of New Zealand rugby in general. If there is one area where Australia have been consistently outplayed by their rivals from across the Tasman during the Bledisloe Cup drought of recent times, it is at the tackle zone.

It is probably no accident that Rennie’s single contribution to the excellent online coaching resource that is The Rugby Site is a nine-minute module entitled “Cleanout Drills”.

The technical theme of Rennie’s session is the need to enter the tackle zone low, chase the feet well beyond the ball and still be in a position to resist counter-pressure at the end:

“If you go in high, you leave your feet quickly. We want the cleanout to go in low, pump the legs and get beyond the ball. We want to drop our body height right down, lead with the shoulder and chase the feet through. That way we are still in a strong position to resist the counter-ruck.”

From this perspective, of greatest concern to the new Australian head coach may be the loss of a number of key cleanout operators who became unavailable after the 2019 World Cup.

In possession, you can be a ball-carrier or you can be a ball-supporter. Both actions can be creative. If the engine of attack is the ability to break the line, then effective cleanouts over a tackled player are the essential oil in that engine.

Finding the right balance between carriers and supporters is one of the attack coach’s main priorities when building an offence. Let’s wind the clock back to Australia’s key group game against Wales at the 2019 World Cup to observe how that balance worked in the Michael Cheika era.

The following table describes the basic ball-carrying emphasis and includes every player who had ten or more carries in the course of the game:

The main ball-carriers, judged by frequency of carries and success in making metres, were number 8 Isi Naisarani and openside Michael Hooper up front, and inside centre Samu Kerevi and fullback Dane Haylett-Petty behind. Matt Toomua also made a highly influential contribution when coming off the bench for the last 35 minutes of the match at flyhalf.

Let’s compare that with a table detailing the work of the main contributors at the cleanout. For the purposes of the article, I have restricted the scope of a cleanout to the first or second player arriving with a concrete influence after the tackle:

For the most part, attackers either carry the ball or they support it. The heavy carriers like Naisarani, Kerevi and Koroibete combined for 38 carries and 212 metres, but only issued a total of 15 cleanouts between them. Samu Kerevi and Marika Koroibete authored five in total, despite both playing the entire 80 minutes.

Players with high frequency and excellent numbers at the cleanout, like Rory Arnold and David Pocock, did not make a big impact as ball-carriers. Their combined total was 15 runs for 11 metres gained.

There is, however, a small group in the middle ground who were asked to both carry and support. That group included prop Allan Alaalatoa, second-rower Izack Rodda, Hooper, Toomua and Haylett-Petty.

Cleanout effectiveness is the key metric. It is a scale which measures whether a cleanout is dominant (for example, a one-man ruck winning quick ball), passive (conceding turnover or disruption), or neutral (maintaining possession but not developing momentum).

On this scale, 50 is the average expectation, 50-60 is above-average and 60+ represents a dominant performance. Below 50 tends to indicate some failures or breakdowns in technique.

The top cleanout operators at forward in the game against Wales were Pocock, Alaalatoa and Arnold. A special mention should also be made of Toomua, who made ten carries and executed seven significant cleanouts in 35 minutes after replacing Bernard Foley at outside-half (Foley had two carries and two cleanouts in 45 minutes).

Let’s begin with some of the negatives. A threatening black cloud now hangs over Izack Rodda’s head in the Wallaby second row, and not just because of his reported rift with Brad Thorn at the Reds.

Rodda was required to do a lot of work on attack against Wales (27 runs or cleanouts in a full 80-minute stint) but he did not perform to a consistently high standard in either area.

The rot set in at Australia’s very first ruck of the game:

Rodda is the first man in support of ball-carrier Michael Hooper, but he is comprehensively driven out of the play by the combination of Ken Owens and Alun Wyn Jones. The main issue is body height on entry: 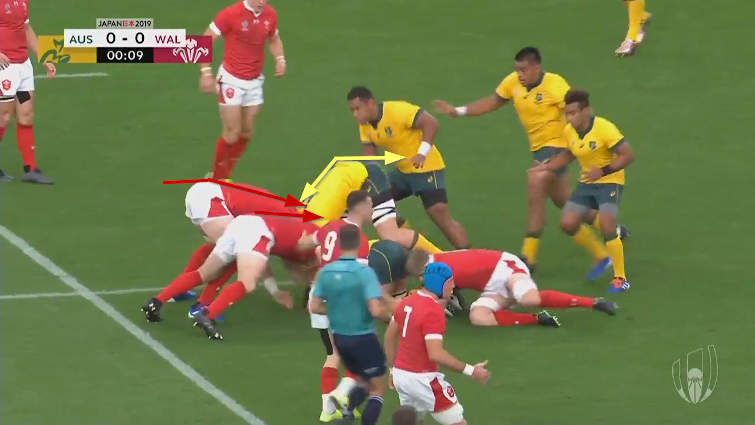 Scott Sio is slow to provide support, but both of the Welsh forwards are in a lower, more dynamic position than Rodda in any case.

The next instance also connected Hooper on the carry with Rodda as his first cleanout support:

Hooper does his part, breaking the first tackle at the line, but Rodda fails to remove Justin Tipuric (in the blue hat), who is the primary threat to the ball.

An interesting comparison in technique occurred later in the match, with both Rodda and David Pocock involved at the cleanout:

In terms of ease of removal, Pocock simply does a much better job than Rodda. He smashes into Alun Wyn Jones and scores a straight knockdown on the Wales captain on the far side of the tackle, while Rodda is again too upright and struggling with replacement prop Nicky Smith over on the left side: 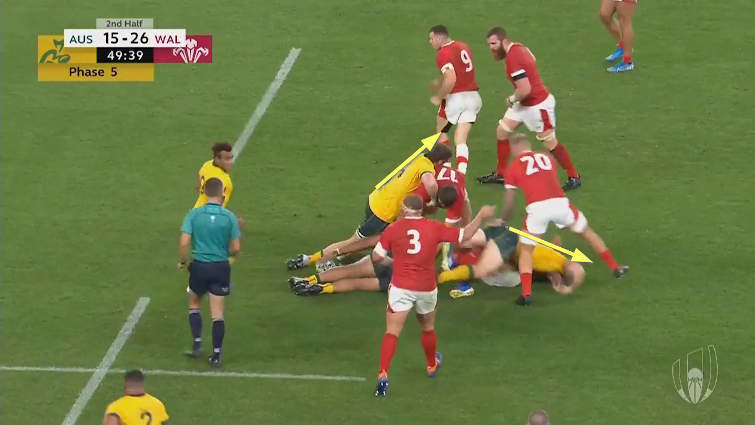 It is no surprise that the attack comes back to the exposed side of the ruck which Pocock has created with his dominant effort.

As I pointed out in this article prior to the World Cup, Michael Hooper is a huge contributor to both areas with 31 combined involvements. There is little doubt that he is more effective on the carry than he is at the cleanout, where his score of 50 (over both articles) indicates a level of competence rather than dominance:

Although there is a lot of Welsh ‘rubbish’ left on the Wallaby side after the tackle (for which the men in red were eventually penalised), Hooper still struggles to make a dent in the Welsh back (George North) over the ball on initial impact. He gets there with a strong second effort, but this is the type of entry which only tends to secure possession rather than produce instant attack-worthy ball.

It is thrown into further relief by a typically strong cleanout from Arnold, making a strong entry and then using his long levers to peel away his Welsh opponent (Ross Moriarty) on the red side of the ruck: 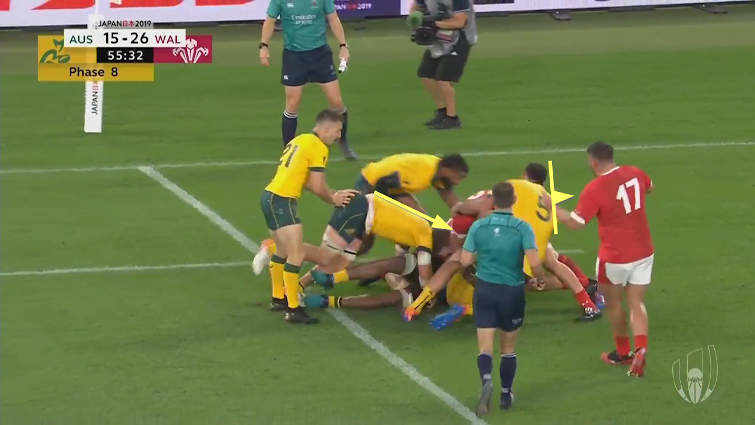 From the Wallabies’ viewpoint, the star of the cleanout show was undoubtedly David Pocock. One in every three of Pocock’s 24 cleanouts was dominant, and that grants a big advantage to the attack on the next phase:

These two examples represent two entirely different techniques on entry to the tackle site. In the first, Pocock arrives simultaneously with Wales second-rower Jake Ball. Ball is 6’7 and tips the scales at over 120 kilos but there is no movement at all on Pocock’s side. He is rock-solid ‘sitting’ above the ball and the one-man ruck allows Samu Kerevi to take the outside shoulder of the defender on the next phase for a break.

In the second instance Pocock is on a ‘blast’, driving Wales centre Jonathan Davies yards and yards out of shot and clearing a lane straight up the middle for Tolu Latu on the pick and go.

‘Foxy’ Davies was the victim for a second time when he tried to tie up Isi Naisarani with a high choke tackle later in the game:

Pocock scores another knockdown. That means the choke has no time to take hold and attacking play proceeds with no loss of momentum.

Matt Toomua’s performance at cleanout time was on the field was also noteworthy. Flyhalves in the modern game have to be far more than the clean-shorted passing and running wizards of yore!

The guy Toomua is picking up and driving out of the play is none other than Wales loosehead Nicky Smith – it is a number 10 on a number 1 – and that opens the field for James O’Connor to attack the outside shoulder of the defender opposite him on the following phase: 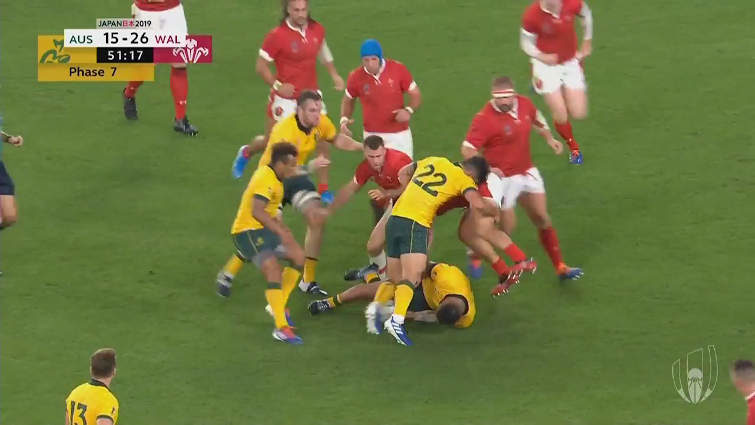 Summary
Building an offence from the ground up – by developing cleanout excellence – is a path I believe Dave Rennie will take in his construction of a new Wallabies team. It also offers up some important truths about the component parts of that team.

There is little doubt the losses of David Pocock and Rory Arnold will be keenly felt, especially given the technical issues that continue to beset Izack Rodda (and Lukhan Salakaia-Loto) in that area.

All the positions in the tight five, bar Allan Alaalatoa at tighthead prop, are up for grabs, while number 6 spot remains the Gordian Knot of Australian selection.

In the backs, players like Matt Toomua, Tevita Kuridrani and Dane Haylett-Petty, who all like to get their hands dirty at cleanout time, are likely to enjoy a head start in the contact-driven environment their new coach will build at training camps.

Shrinking violets are not Rennie’s cup of tea at all. He will want people who have the desire to go the extra mile, drive well beyond the ball and get in opposition faces. He will ask his Wallabies to be confrontational in the contact zone – whatever it takes, whatever the cost.