How good is it to finally have footy back!

And how good is it to welcome the AFL’s return with excitement instead of fear.

After a few months of wishing and waiting, Round 2 of the AFL has finally arrived. And while it looks a little different to how we thought it would, it’s just great to have our old friend back.

Tonight should’ve been the Round 13 clash between Geelong and Hawthorn at the MCG. Remarkably, tonight’s game is the only one that features the teams and timeslot originally scheduled for Round 13.

But it isn’t without some changes – most notably the change in location, with the game moved from the MCG to GMHBA.

While Hawthorn hasn’t played at the venue in 14 years, they will have some fond memories from their last visit. In Round 3, 2006, the Hawks defeated Geelong by 52 points in front of over 24,000 fans at what was then known as Skilled Stadium. Campbell Brown and Mark Williams kicked three apiece, while Luke Hodge was awarded best on ground.

There won’t nearly be as many people in attendance, but we could be in for another Geelong-Hawthorn classic.

Even if there are a few goals separating the sides, the game is never really over between them until the final siren. Always highly entertaining games and knowing their recent history, you’re almost always left on the edge of your seat until the end. 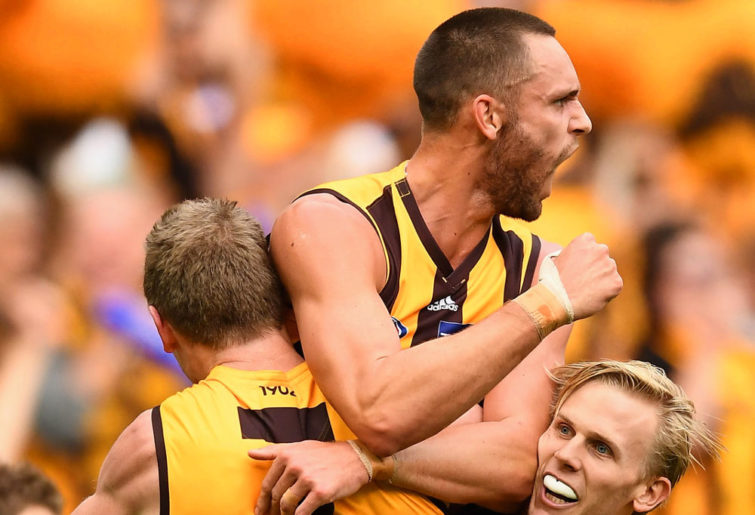 The teams met twice last year, on Easter Monday and in Round 18. Each took home a victory, with my personal favourite being the Gary Rohan show in Geelong’s 23-point Easter Monday victory.

Rohan will line up against the Hawks tonight in his second game for the season and he, along with the entire Geelong Football Club, will honour milestone man Patrick Dangerfield in his 250th game.

Since arriving at the Cattery in 2016, Danger has enjoyed a string of individual success including being crowned the 2016 Brownlow medallist.

He has won the Carji Greeves Medal three of a possible four times, named All Australian in all four seasons at Geelong (a total of seven) and is the president of the AFL Players Association – and those are just a few of his achievements.

The next step is to turn it into team success.

He’s a player many people love to hate off the field, but you can’t help but admire the way he goes about it on the field. He is a significant part of Geelong’s line-up and often carries the side to victory. It is a pleasure to watch him, week in and week out.

Geelong coach Chris Scott said that Danger has been “transformational” for the football club and it’s hard to disagree. He knows how to make a statement on and off the field and always gives the football community something to talk about.

Rejoining the team for the special occasion is Jed Bews, Brandan Parfitt and Rhys Stanley, while Jordan Clark, Darcy Fort and Zach Guthrie have been forced out to make way.

As for the Hawks, well, it’s bittersweet news for them at the selection table with vice-captain Jaeger O’Meara sidelined with a facial fracture. Defender Blake Hardwick, however, has been given the all-clear and will play his first game of the season.

Although this isn’t the first game of the season, it’s just as difficult to make an informed and educated tip on who will walk away victorious.

Looking all the way back to Round 1, Hawthorn finally claimed a victory over Brisbane following four successive losses. After an even first quarter, the Hawks started to pull away and ran out 28-point winners.

But by the time this game began the season was already over and we will never truly know how that impacted on the play and the result. You’d hope there would have been no impact, but the truth is we’ll never really know.

Geelong, on the other hand, fell to the Giants by 32 points in Sydney.

But enough about then and more about now. Who takes the chocolates tonight? We all know that logic often flies out the window when these two teams face off. But I’ll do my best.

Of the 18 teams in the competition, Geelong is sitting third for disposal efficiency after Round 1 (Hawks 11th), but sit a lowly 16th for tackles (Hawks eighth). So if Geelong can gain control of the game and the tempo early, they could definitely be on their way to a strong victory.

On the other hand, if Hawthorn brings its physicality to GMHBA, the Cats may not be able to respond. We saw this in the second half of the 2019 preliminary final. As Richmond turned up the heat, they watched a panicked Geelong side crumble with no room to move.

I’d say the ball is in Geelong’s court here, and their ability to fire up could very well determine the outcome of this game.

My gut still says they’ll win, mainly thanks to that home ground advantage. And if anyone is going to do his very best to ensure there is a celebration that follows his party, it’s Patrick Dangerfield. There are very few who can completely dominate a game like he can, and it would be a treat to see him in full force tonight. All the very best to him in Game 250.

That’s my Friday forecast, what’s yours?