After his wedding, he was caught urinating next to a police vehicle, saying it had put a dampener on his weekend and his actions weren’t acceptable. He was slaughtered by the media the following weeks.

In February 2015, he along with other players from the Titans were involved in an infamous cocaine supply scandal.

This had him stood down from the club, although charges were later dropped due to a lack of evidence.

The final nail in the coffin was an incident in 2016 at a Byron Bay club, which was investigated by the NRL. It was his third major issue.

During his playing career he became one of the most hated players throughout the league for his ability to get under someone’s skin.

On and off the field, he had a knack for trouble. 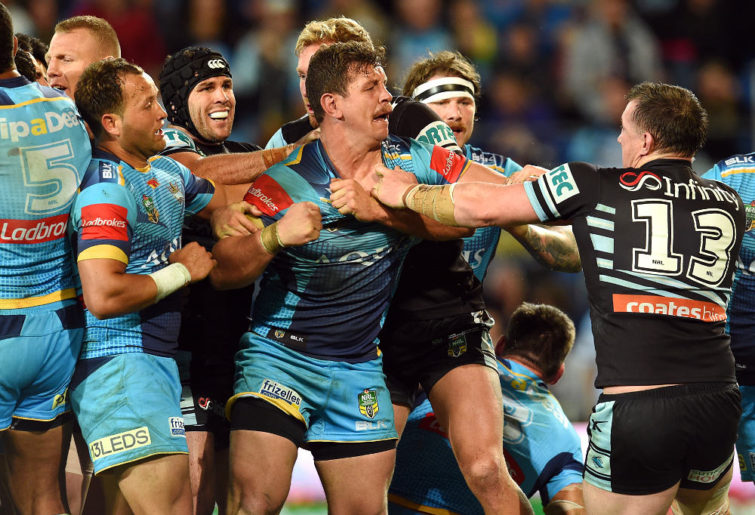 He was someone you loved to be on your team but despised if you came up against him, for both his immaculate play and dirty tactics.

This final issue led to his departure from not only the league but the country, packing up and leaving Australia to move to France, out of the public eye.

Before leaving, he had one last swipe at the Titans, saying: “I’m disappointed that like other people at the club I got pushed out the door”.

His original club from 2007, the Catalan Dragons, were lucky to see the 32-year-old Bird return on a five-year deal.

The Dragons had him for only three years until the announcement in 2019 that he would be calling it quits.

He tore it up for his old club like he once had for the Titans, playing 76 games, and crossing the line 13 times, winning the prestigious 2018 Challenge Cup.

He was given a hero’s farewell by the Dragons and when the final whistle blew, the crowd erupted as he held the ball up high, giving a royal wave to his forever grateful fans.

Even fans back in Australia had the same love for their once great mischief-maker, despite the not-so-kind words he left for their club.

After retirement, Bird has stayed under the radar and is living a quiet life with his family, although he never has fallen out of the thoughts of fans.

Titans fans today hold him as one of the club’s greatest players, drawing comparisons to current player Keegan Hipgrave, both for their iconic moustache and their playing style (minus the mayhem).

Titans supporters hope to see Hipgrave reach the level of success of Bird, hopefully taking the club back to the playoffs, which they haven’t seen since 2016 after Bird’s departure.

All in all, he is a legend for the Dragons, Sharks and the Titans. Greg Bird will be hated by few and loved by many for years to come.