It’s due to start again on July 16. This is how I assessed the Brisbane Roar’s season as it stands prior to the restart.

What’s the story?
The Brisbane Roar were wondering how they would make the top six this season and play finals. That is until Jamie Young was given the opportunity to play and he literally grasped the opportunity with both hands, literally.

Then the Roar recruited Corey Brown, who has been pivotal for them. Brown has played on the left wing as opposed to his usual position of left back and the change of position has worked. Scott McDonald has been a good addition, scoring some goals.

Despite the fact that the Brisbane Roar are currently fourth on the ladder, it’s difficult to understand why they let go of two quality players: Roy O’Donovan was the Brisbane Roar’s top scorer at the time that he was let go! They have also surrendered Stefan Mauk, who is a prodigious talent – Adelaide United will benefit from signing him.

The Roar also let a quality left back in Connor O’Toole go and join the Newcastle Jets. O’Toole was outstanding playing his one and only game thus far for the Jets.

Despite all of that, Robbie Fowler has done a decent job to get the Roar into the top six.

The five most talented players
5. Jay O’Shea has been a constant for the Brisbane Roar, playing every minute of every game. O’Shea has helped them control the middle of the park in their resurgence and often helped them gain the ascendancy. He also has one goal and four assists, which indicates that he can impact the game in the final third.

4. Scott McDonald has scored some pivotal goals. McDonald still has the talent to expose other teams’ deficiencies in defence. He is clinical in the final third.

2. Bradden Inman has four goals and four assists. Inman is a talented player with plenty of ability in the final third.

1. Tom Aldred has been a revelation in the centre of defence. Aldred is one of the reasons why Brisbane Roar can play three at the back. His endeavour never wavers, nearly always performing at his optimum level.

Honourable mention: Aiden O’Neill is a talented player and plays his role for the team extremely well. He missed a few games as he was playing in Asia with the Olyroos.

He needs to score some goals and provide assists to be the player that he’s capable of being just like Steven Ugarkovic has done for the Newcastle Jets, adding goals to his game.

Adaptable players
Both of the wingers for the Brisbane Roar, as they have the capability of playing in defence or in the midfield. Corey Brown had predominantly played as a left back. That all changed when Brown was given the opportunity to play on the left wing, which followed being recruited by the Brisbane Roar.

Jack Hingert has generally played right back for the majority of his career. That has altered since Robbie Fowler has been Hingert’s coach in the 2019-20 A-League, season where he has played mostly on the right wing. 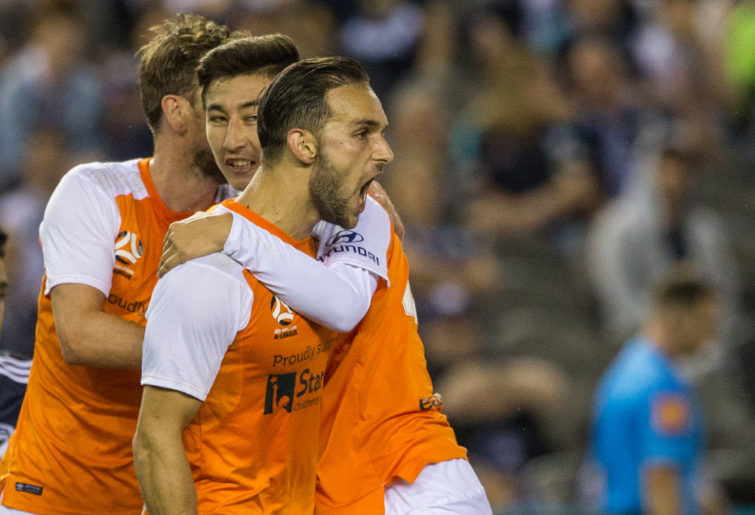 Scott Neville has generally played right back throughout his career. Neville has had his position changed to be a part of the back three as he has played centre back, for the majority of the 2019-20 A-League season.

Who needs to lift?
Prior to Jamie Young being given the opportunity to be in the starting lineup, the entire Brisbane Roar team needed to lift. Following the Brisbane Roar’s resurgence, Mirza Muratovic may have two goals and provided two assists for the Brisbane Roar, but he can be even better as he had just 12 appearances, five of them off the substitutes bench.

Luckily, he is only 20 years old so he has time on his side. Dylan Wenzel-Halls can also improve even though he is mostly used as a substitute. Wenzel-Halls has scored just one goal in 16 appearances, nine of which off the substitutes bench.

What has to alter?
Not a lot, the formation the Brisbane Roar are playing with three at the back appears to be working well.

Wenzel-Halls should be in the starting lineup for the majority of the games that the Brisbane Roar play in as he has a lot of potential to score goals.

The Brisbane Roar have announced Warren Moon as their new head coach, after the sudden departure of his predecessor Robbie Fowler.