On that day, England were facing Bangladesh in a day-night tri-series match at Trent Bridge. It was the Ashes season, and many possibly saw this limited-overs series (also involving Australia) as just a warm-up before the epic Test series that followed.

However, Bangladesh had stunned Australia by five wickets in their previous game at Cardiff, giving delight to many an English fan. This meant that the hosts could not afford to be complacent – even though they had seen off the Tigers by ten wickets in the opening round of the series – and they showed that they meant business, right from ball one.

After Michael Vaughan won the toss and elected to bat, Marcus Trescothick (85 in 65 balls) and Andrew Strauss bludgeoned the opposition, racking up an opening stand of 141 in just 16.3 overs. A minor wobble saw England fall to 3-179, but at this point, exactly 25 overs were still remaining. Paul Collingwood came in at the fall of the third wicket, joining Strauss in the middle.

Collingwood started off confidently, with the cushion of a strong foundation in place. The run rate hardly went below 6.5, as the duo milked the inexperienced Bangladeshi bowling. They put on a massive 210-run partnership, which ended only off the penultimate ball of the innings, when Strauss was dismissed for 152 off 128 balls.

Collingwood remained unbeaten on a career-best 112 in 86 balls, with ten fours and five sixes. He brought up his fifty in 53 balls with a four off Mohammed Rafique in the 40th over, but took only 24 deliveries more to reach his hundred, which he reached with a single off Nazmul Hossain in the 48th over. His 77-ball ton was then England’s third fastest, and the total of 4-391 was then the second highest overall.

With all due respect to Bangladesh, the game was done and dusted by a safe margin. But Collingwood was not done yet. Debutant Chris Tremlett had taken two wickets in two balls to reduce Bangladesh to 2-30 by the tenth over, which brought the in-form Mohammad Ashraful (he had made 100 in the upset win over Australia) to the crease.

Ashraful went hell for leather, bringing up his fifty in just 21 balls. He went on to score an awesome 94 off just 52 balls, and put on 125 for the third wicket with the sedate Javed Omar (59 off 106 balls). It was the innocuous bowling of Collingwood, who had figures of 0-4 in two overs until then, which accounted for Ashraful in the 26th over, thus robbing Bangladesh of their only faint hope. 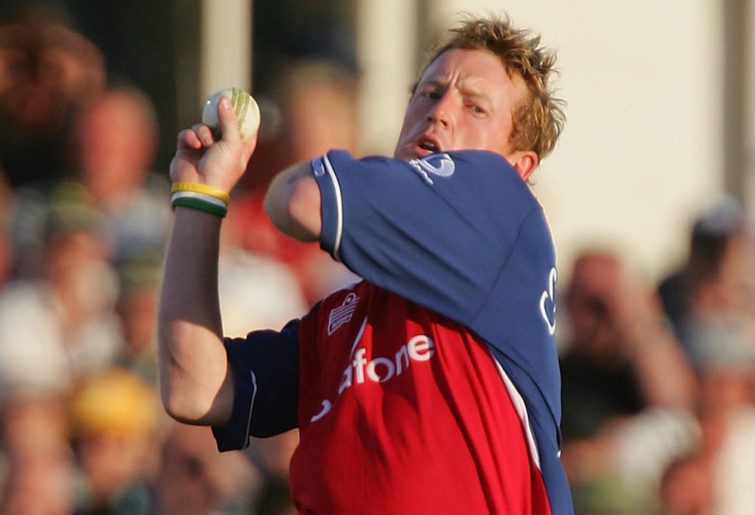 This opened the floodgates, and Collingwood proceeded to cut through the middle order with his gentle medium pace. In a span of 14 overs, 2-155 became 8-201 – all six wickets falling to Collingwood. Like Tremlett, he too was on a hat trick once when he followed captain Habibul Bashar’s dismissal with the wicket of Aftab Ahmed, who was out caught and bowled. Three of his six victims were bowled.

Tremlett (4-32) came back to claim the last two wickets, as Bangladesh were dismissed for 223 in 45.2 overs, losing by 168 runs. Collingwood bowled unchanged throughout between overs 21 and 40, and recorded figures of 10-1-31-6. His last four overs read 4-1-7-5. This was the first time that a player had scored a century and taken six wickets in the same ODI, and to date no one else has repeated the feat.

The previous best all-round show was by Vivian Richards, who hit 119 and took 5-41 for the West Indies against New Zealand at Dunedin in 1986-87. Collingwood’s figures of 6-31 also broke Mark Ealham’s record (5-15 versus Zimbabwe, Kimberley, 1999-00) for the best ODI bowling return by an Englishman. The record is still standing, with Chris Woakes the only other English bowler to have taken an ODI six-for.

Collingwood’s figures also became the best ODI bowling analysis at Trent Bridge, surpassing Kenneth MacLeay’s 6-39 for Australia against India in the 1983 World Cup. He was the first English batsman to cross the mark of 5000 ODI runs – his total reads 5092 in 197 matches from 2001 to 2011. Add to that his outstanding fielding, and it is safe to say that he finished his career as one of England’s best ODI players.