On the first occasion, Healey was omitted from Clive Woodward’s squad for the tournament, when the head coach decreed that there would be no room for so-called utility players.

On the second, Healey actually travelled to Sydney from London as a replacement for scrumhalf Kyran Bracken ahead of the crunch semi-final clash with France, after another flare-up of Bracken’s besetting back injury.

But by the time he arrived at the Manly Pacific hotel, Bracken had recovered fitness to take his place on the bench. Healey only had time to have a quick cup of coffee with a few Leicester teammates before turning on his heel to begin the long, long journey back home.

Under the rules of the time, it was forbidden for more than 30 players to stay in the team hotel at any one time, and Healey disappeared into the mist of non-selection from which he had so briefly emerged. Weighed down by superfluous luggage, he cut a forlorn figure as he left for the airport.

Healey was a victim of his own versatility. He had represented England at numbers 9, 10, 11, 14 and 15 and was good enough to make the 2001 British and Irish Lions tour of Australia. But when push came to shove, Healey’s ability to deliver a quality performance in so many positions counted not for, but against him.

What by rights should have been the proudest moment of his career became one of his lowest. There are no medals for filling in wherever you’re needed.

Australia’s answer to Healey is Reece Hodge, and he has reached a very similar crossroads in his professional career. Hodge has played in every position in the backs except scrumhalf for either his country or his Super Rugby franchise, the Melbourne Rebels.

Events have reached a tipping point. Hodge’s undoubted value in covering so many different positions in the backs is palpably outweighing his need to specialise and become the outstanding player his talents warrant in one spot alone.

Hodge was forced off with a groin injury after only 20 minutes in the Rebels’ Round 3 win over the Waratahs on 14 February 2020 and hasn’t played since, and he has largely disappeared from Wallaby supporter debates on the composition of Dave Rennie new backline. He has become Australia’s forgotten man, just as he should be approaching the peak of his powers at age 25.

Michael Cheika’s tactical policy in the backs did little to realise Hodge’s playing potential. Hodge was tried out on both wings, at outside centre and even flyhalf for one game against Japan. He was never encouraged to settle down and learn all the nuances of just one position.

With the defensive ‘musical chairs’ strategy employed by Australia between 2015 and 2019, he was not even allowed to defend in the same side of the field regularly.

In the quarter-final against England, Hodge was first asked to defend on the right wing:

And then on the left:

These sequences both led to England tries, and Hodge’s hesitancy is amply illustrated. In the first example, Manu Tuilagi has made a powerful burst up the middle and Australia have been caught short on the far side of the field: 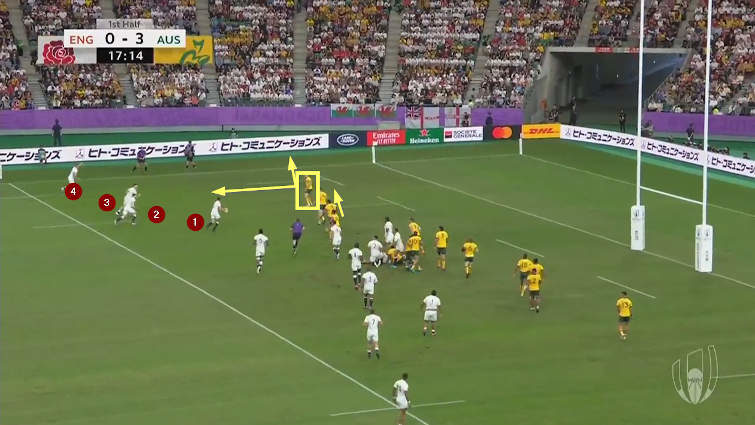 There is a clear overlap out to Johnny May on the left touchline, so Hodge’s only recourse is to rush up on the second receiver outside Owen Farrell (either Tom Curry or Elliott Daly) and shut the play down. Instead, he backs off, and you cannot afford to give up yards on the outside when defending so deep in your own 22. The drift costs lives in the red zone.

Because of Australia’s defensive machinations, Hodge was been required to defend on the left wing in the second instance: 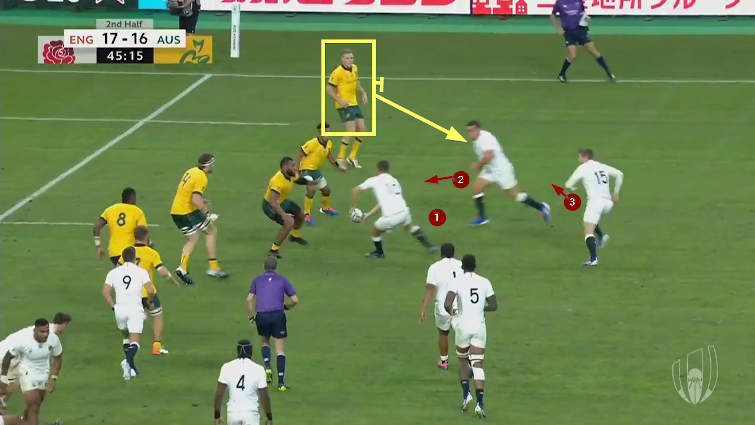 Once again, he is too hesitant to close the space on to Daly, and that gives space for Anthony Watson to exploit down the right. England prop Kyle Sinckler crossed for a try a couple of phases later. The whole build-up and finish can be viewed here:

There are two issues to consider. Firstly, Hodge has been asked to swap wings in defence by the Wallabies defensive system, and there are not too many who can do that with equal effectiveness.

The deeper issue is Hodge is a more decisive and impactful defender when he is leading up in midfield, not sagging off on the outside as the last man:

These two sequences are taken from kick chases in the Rebels-Stormers match in 2019. Although Hodge has number 15 on his back, he functioned as an outside centre on defence throughout the game in these situations, leading the line up as the highest defender and organising the men alongside him.

In the first example, he drives onto the passer and forces him to start moving laterally towards the sideline, setting up a dominant tackle on the Rebels’ right. In the second, he flies all the way up on to the ball himself to score a spectacular intercept try.

In set-piece defence, Hodge was also asked to adopt a more central role for the Rebels, defending in the 10 channel as the first back:

These two examples (from the game against the Sunwolves one week before the Stormers encounter) show where Hodge is most comfortable on defence – leading the line-speed from a central position in midfield. There could not be a starker contrast with the moments of indecision in the wide channels against England.

What is true on defence is also true with ball in hand. Whether Hodge is wearing 13 or 15 for the Rebels, they get most out of him when he is running hard ‘unders’ lines right up the middle of the field. The team from Melbourne employs an attacking formation with number 12 Billy Meakes standing at first receiver, Hodge coming short off him and Quade Cooper ghosting around to the outside: 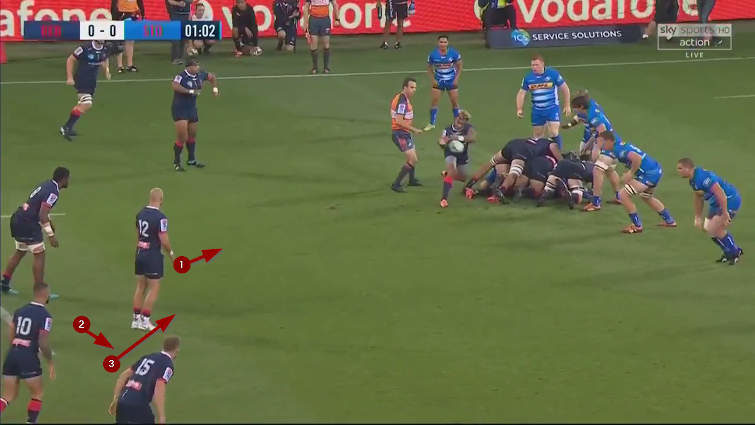 The formation worked perfectly for a set-piece try the Rebels scored against the Reds in their Round 13 encounter:

Hodge gets a neat offload away at the very end of his run to continue the move without an unnecessary break in play. His power and ability to cut a line is also of obvious value in short-range situations:

His offloading ability was reinforced in another score against the hapless Moondoggies:

Hodge’s prodigious kicking ability is a feature of his game which has never been systematically realised, although second receiver seems like a very natural fit for him from this vantage point:

In both examples, Hodge has comfortably outkicked the Waratahs backfield and forced a defensive clearance to touch, with a Rebels’ lineout following in opposition territory.

Summary
Austin Healey had become the forgotten man of English rugby by the 2003 World Cup, even though he could deliver a high-class performance in at least three different spots in the backline. Once you are tarred with the ‘jack of all trades, master of none’ brush, it is difficult to shake it off and prove yourself the best in one particular position.

It is unlikely that a coach as astute as Dave Rennie will have overlooked Reece Hodge, but he will be aware the Melbourne Rebel has to make his move now and specialise at the age of 25 in order to fulfil his potential on the international stage.

Hodge’s talents are wasted at either wing spot. At 6’3 and around 100 kilos, he has the size, power and (most importantly) the instincts to be playing through the middle of the field consistently. That means either one of the centre spots, or it means fullback. 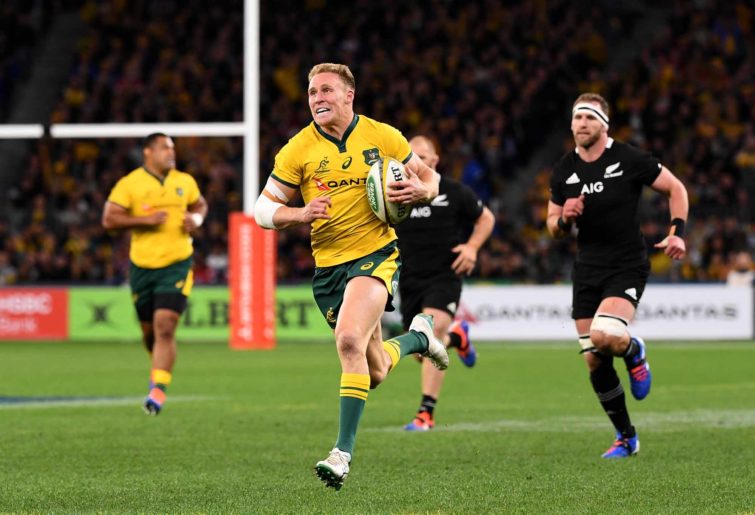 Hodge is at his best leading the defensive line up anywhere between 10 and 13, and running hard, straight lines off first receiver in attack. His kicking is another under-utilised resource which could become a significant bonus in the right coaching hands.

Whatever happens in Rennie’s brave new Wallaby world, Hodge must ensure that he now makes the optimum move for his own career. In a few years’ time, he will want to go out with the bang of being the best in one spot, rather than settling for adequacy in three or four positions and disappearing in a whimper of versatility.