The Dragons weren’t that bad at stages but did end up losing the game 26-12 after a wonderful performance from that man Morris and Luke Keary, who took control in the second half.

Luke Keary scored a very easy try when he ran straight through the Dragons to make it 20-12 and in the last five minutes Keary put up a wonderful kick for Morris to score his hat trick and for Keary to finish the game with one try and two try assists.

Joey Manu played fullback after James Tedesco was ruled out and he didn’t look that bad. He set up a wonderful flick pass to Jared Waerea-Hargreaves to score and also ran for a monstrous 310 metres, also coming up with six tackle breaks and only one error.

This game came at a cost though, with Sam Verrills and Victor Radley both suffering season-ending ACL injuries in the opening 25 minutes of the first half.

Lindsay Collins – once again coming off the bench – was great with 132 running metres. He also made 32 tackles for only two misses.

The Dragons scored tries through Zac Lomax and Mikaele Ravalawa. Matt Dufty set up both of those tries.

Josh Kerr, coming off the bench, was the Dragons’ best forward after he ran the most metres of any Dragons forward. He produced 125 metres, one tackle break, 25 tackles for no misses and only made one error.

The score at halftime was 10-10, and after losing Victor Radley and Sam Verrills and having no James Tedesco or Josh Morris, I was thinking that the Dragons could make it a close game. But the Roosters and Luke Keary being who they are, they were able to make it 26-12.

The Dragons actually had 54 per cent of possession and a better completion rate (83 per cent), which really shows that even when the Roosters make 13 errors, their defence will always stand up and make our jaws drop.

The Dragons missed 27 tackles compared to the Roosters’ 21 with Cameron McInnes making the most tackles with 55 after moving from dummy half to lock when Ben Hunt came onto the field.

Next up, the Roosters have Melbourne, who are coming off a big 50-6 win over the Warriors and the Dragons will take on Jack Wighton’s Raiders.

The NRL is in mourning today after news broke rugby league Immortal Norm Provan has passed away. He was 88.

The NRL grand final on Sunday is set to mark the end of the 2021 season, and for South Sydney coach Wayne Bennett, history beckons. 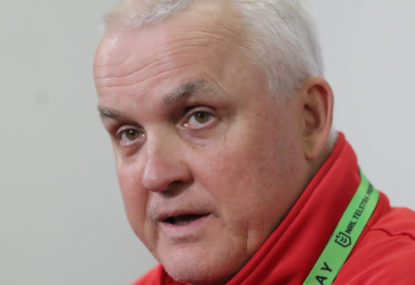