The successful trans-Tasman 2023 Women’s World Cup bid saw mayhem and excitement on both sides of the ditch and just about anyone who considers themselves to be anyone climbed aboard in the hope of riding the football wave.

The corporate sector, numerous politicians and a swathe of media organisations normally lukewarm to football, embraced the news and appeared hell bent on ensuring that Australia knew two clear things about them.

Firstly, as press release after press release arrived, the authors were determined to establish their support of the tournament and the Matildas right from the opening bell. Secondly, they were insistent in informing us that they have always supported the game and will continue to do so.

As ex-Matildas, female players and the vast majority of passionate football fans jumped for joy or shed a quiet and proud tear, the predictable bandwagon jumpers were out in force.

New South Wales Premier Gladys Berejiklian almost came to tears in her heart felt congratulations on Friday morning and federal opposition leader Anthony Albanese waxed lyrical in his tweet, “You can’t be what you can’t see – and a whole generation of young girls won’t forget seeing this. The 2023 FIFA Women’s World Cup is coming to Australia and New Zealand.”

You can’t be what you can’t see – and a whole generation of young girls won’t forget seeing this.

With just days remaining before the final decision was to be made, the national leaders of both Australia and New Zealand decided to get in early.

Well known Cronulla Sharks fan and now apparent football lover Scott Morrison produced a joint statement with the woman in the shaky isles who increasingly looks like the most re-electable current world leader.

Jacinda Ardern may well have taken Morrison on head to head in Sydney some months back in a stunning and intimidating press conference that had our PM squirming, yet the statement celebrating football and their support for the quest to bring the world’s biggest women’s sporting event to Australia/New Zealand could not have been more uniformed or cohesive.

“An Australia-New Zealand FIFA Women’s World Cup would embody our passion for women’s football and proud commitment to equality and fairness, creating a profound and enduring legacy for the future of women’s football within the region and beyond.

“We would host a tournament FIFA can be proud of in every way possible: technical excellence, record-breaking crowds, commercial certainty and a warm embrace from our 200 different cultures.

“Football is the game that connects us all. We sincerely hope that an Australia-New Zealand FIFA Women’s World Cup™ will bring us all together again in 2023, when we can all celebrate humanity, community and unity through football.”

As we basked in the sheer joy of the decision, the words “commercial certainty” should not have escaped us. In short, newspapers, television networks, politicians and corporate entities have already begun queuing up to ensure their piece of the pie is assured come 2023.

Whilst some might call me cynical, the reality is that in excess of one billion viewers means there is some serious ‘moolah’ to be made by somebody somewhere.

With an awareness of the rather loose moral compass that many politicians, media organisations and corporate entities use, there is no doubt that football, and the women’s version in particular, will become the flavour of the month in Australia for the next 36.

Good luck to them all. Football is indeed a business, a potential money spinner for the host country and an event that can produce and provide improved infrastructure and benefits for the domestic game.

Hopefully, as a football writer, I might pick up an extra gig or two in the lead up to the event, as Women’s World Cup content is sought by all and sundry.

Such an opportunity will not bring in the mega bucks destined to come the way of state governments, merchandise sellers or ticketing agencies, yet would be much appreciated by my mortgage.

Yet, as many position themselves to profit and benefit as significantly as they can from the biggest sporting event to hit Australia’s shores since the 2000 Olympics, I am hoping to focus more on the romantic.

Amidst the frantic game of musical chairs that has already begun, the symbolic relevance of our Matildas challenging for a World Cup on home soil should be the bedrock of connection between the Australian sporting public and the tournament. 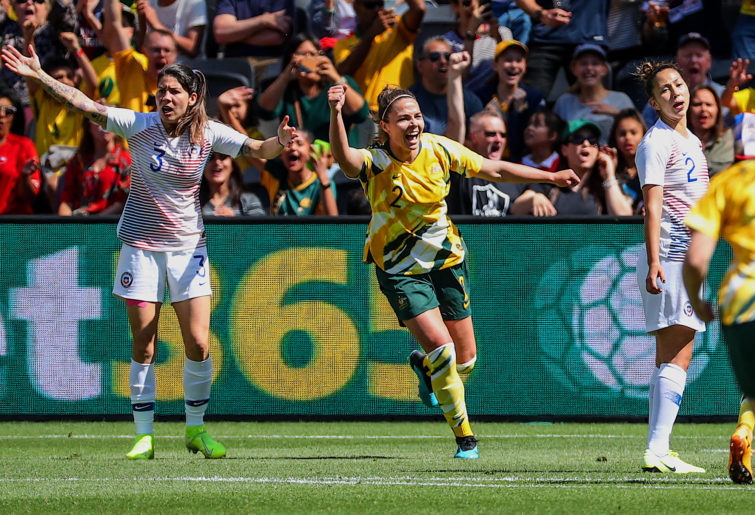 I’m sure there were many cynics who felt somewhat cold with and uninspired by the announcement last Friday; people no doubt unimpressed with women’s football and women’s sport in general.

The true significance of the tournament could be in changing such sentiments, just as the 2015 Asian Cup captured the cultures and passions of the Asian region and played out as a sporting and social success.

Those riding the current bandwagon are clever enough to realise the potential ramifications of the event, from both a populist and financial perspective.

Others whose concerns lie more within the game itself will remain focused on exactly what a down under World Cup might do for the domestic game, the women who play it and Australia’s constant struggle to establish itself as a respected football nation.