A prolonged disenchantment with officiating dynamics has driven me to consider and explore some radical system changes.

If I ever thought that the NRL would take my suggestions to heart I’d have presented this at the start of Covid-19 lockdown so they could use it now, but as they don’t we’ll have to give it to them later armed with a hundred (or so) thoughtful Roarer tweaks and critiques.

Or I’ll just utilise the opportunity provided here to have a spray amongst some (hopefully) like-minded and constructive souls.

I’m challenging the broad officiating structures and nuances, not the rules (though there might be a word or two about interpretation). There are better minds than mine to suggest or dissect rules.

Time for a different approach.

Junk the bunker as it is
There are ways it can be utilised as discussed below as it is flawed.

Leave the decision on the field, embrace the enjoyment of the game and the moment rather than a pursuit of impossible perfection.

The bunker has made a truckload of howlers in its few years and is far from perfect.

Furthermore, it can’t judge on forward passes so what is the point of all this tech ‘to be perfect’ and omit an area causing great concern. In one of the rare times I agree with Joey or Gus, the game shouldn’t be officiated in slow motion.

Set up officiating teams
This could be done possibly even under a different chain of command with some distance from the NRL (replace Graham Annesley along the way, he doesn’t support his people with enough strength). These teams should consist of 6 people and each team officiates one game.

1. Two senior refs. One officiates the game while the other acts as ‘Team Leader” while doubling as ‘back-up’ in the event of injury to the main ref.

These two work as an equal pair and head the team whilst alternating and swapping their roles (for different games, not during the same game, i.e. one week one refs the game, the other leads, the next game they swap, or every two-to-three games as it is up to them.

The ‘team leader’ and can also sit in the bunker (in an altered state) to provide appropriate feedback and commentary live. He or she can field information from the touchies and in-goal judges (more on them later) and vet this for delivery to the on-field ref.

Apparently these poor refs already have people in their ears, coaching/judging. Better to have a supportive partner with some mutual understanding and knows you giving you just what you need at the moment.

The Team Leader can also provide immediate feedback and response to coaches and presser – which can help nip dramas in the bud (more on this near the end).

The Team Leader can be watching the game as it goes by from the ‘Bunker’ (redefined) monitors, providing (generally) accurate information immediately without prolonged delays.

Their roles? Field ref officiates the game, Team Leader manages the team, co-ordinates the flow of information to field ref, uses his/her vantage point to view the game and communicate what they see to support and assist the on-field team.

All this happening smoothly, with no discerning delay to the game or viewer and no chicken meal delays (not sorry for any loss of sponsorship, make it some other way). Ref makes decisions (with help from the team) on the spot.

2. Two touchies, Officiate the line, on/off-side and some back-play and kicks for goal. One touchie can line up defence, one attack.

From their position they can set the line and the teams can also get their line from the touchie. The (touchies) can also provide some adjudication on passes – (forward) and some general stuff in back-play. And they need to be supported as well as having some specific training.

Support tryline decisions, field goals, goal kicks as well, also can see a lot of what is happening in back play from their viewpoint. Can be just as effective helping determine tries. Plus their review of back play can be invaluable.

These two should be from the top lower grade of metro refs on a career path.

In the event of an injury, if the ref can still function he/she can take the place of an in-goal judges and move up the line.

The touchie and in-goal refs can be connected by microphone – to the team leader to reduce chatter – but can be switched straight to on field ref if necessary (eg. To explain something and avoid Chinese whispers).

The touchie can get the ref’s attention the old way, raising a flag if needed.

Scenario 1
Attacking team on halfway and kick, all charging through. One touchie sees an attacker checked and calls it to the team leader who can either watch the progress and make a call, relaying to the ref at an appropriate time.

Ball is safely put out by defence, attackers screaming for interference, ref already has the ‘heads up’ from the team leader, informs the attackers that the incident was spotted and deemed not to have affected the outcome, or a penalty, penalty try whatever is issued on the spot.

Scenario 2
Obstruction by attacking team in their 25, but they break through and race away. Ordinarily the incident wouldn’t be reviewed unless they score, and if they don’t score they’ve made 80 meters after an infringement.

But with this officiating structure the touchies/in-goal can communicate with the Team Lead who can make a call down to on-field ref and adjudicate – again on the spot.

When tries are scored the ref checks with the touchie, in-goal and makes a decision. The Team Lead has that 10 second window to communicate any concerns, but 99 percent of the time it should just be decided by the on-field team (ref) on the spot and we get on with the game.

Officiating needs to be done at normal speed. Personally I’d even go as far as to instruct broadcasters that slow-mo reviews are unhelpful and will count against them in negotiations.

When the game is over – and this is a big change – the two coaches (before the presser) get a chance to have their vent to the Team Leader, who (even though they are heading the team) are distanced somewhat from the events on the field and thus complaints and issues become less personal.

The Team Leader can then address the issues providing some resolution straight away, reducing ongoing angst.

Plus, something I really like about this concept, the Team Leader after fielding complaints (noting the genuine ones and providing a pathway for response if needed) can politely and directly point out to the coach the errors that their team made and securing some agreement (which would be some 99 percent of the time) that the official’s questionable decision was not the major cause of the end result. 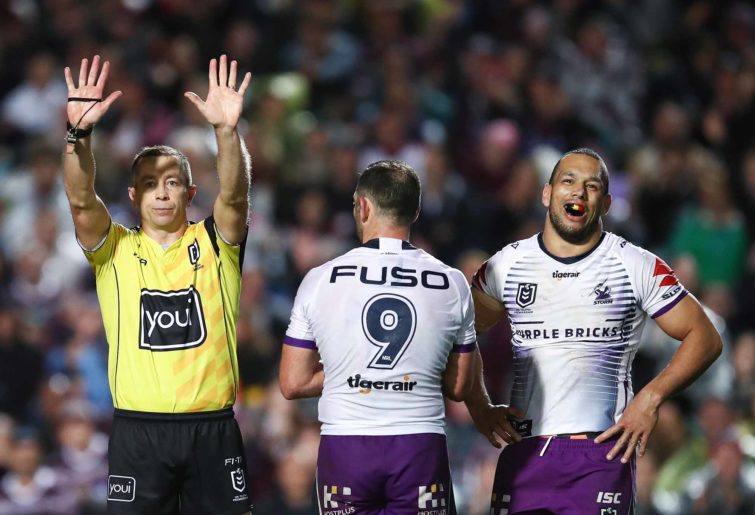 Coaches can then go to the presser, have their comments without this insane protectionist $10K fine and acknowledge that their concerns are/have been addressed and there were other factors involved in their loss. And we are not re-hashing over negativity.

We aren’t going to get perfection, so don’t hunt for it, there will always be a human element. A fair and even contest can be achieved whilst also giving the refs the type of support they need.

I’ve seen in cricket and league (probably because I watch these two the most) and somewhat in soccer, a deterioration in the quality of officials as they have machinery analysing their decisions and then other people making judgement calls on that data, often incorrectly. No wonder they are reluctant to make calls, who wants their every error, large or small, torn apart and put under a microscope.

Set up the system, update the clubs and use the system in trials so the can see it in action. Be strong with interpretations and don’t waver when the objections come through.

The amount of forward passes in the game is absurd and if people are happy with that, then let’s just throw more rules and standards out the window. In cricket, would you accept it if it was a small piece of sandpaper?

Or not technically sandpaper, just some coarse material dampened and dipped in sand?? Let the clubs know, that while the lines people will have extra training, if you don’t want your passes called forward then make sure the receiver is behind the passer upon release, expect some flat passes to be called forward and if it floats too far, leave the physics lesson at home.

Some people can do interesting things with ball movement, arcing a ball out from the hands that leaves the hands going back then curling forward.

Touchies have a micro second to decide and if it quacks and waddles, it’s a duck.