When Laxman and Dravid put Australia to the sword

Bowled out for 171 and trailing by 274 runs, India were sent in to bat again by Australian captain Steve Waugh.

Having scored 59 batting at number six and with Rahul Dravid down with a fever, VVS Laxman is sent in to bat at number three in India’s second innings. Laxman continued his form as he reached his century off 166 deliveries.

But a lack of big scores from the rest of the Indian top five sees India 4-232 late on day three. Trailing by 42 runs, Dravid walks in at number six to stop an India collapse. Laxman and Dravid would survive the rest of day three as India were 4-254 at stumps.

With India trailing by 20 runs and a brittle lower order in place, Australia was heading towards a comfortable series victory (the Aussies had thrashed India by ten wickets in the first Test in Mumbai).

Dravid nearly chopped one onto his stumps early on day four, but luck fell on “The Wall’s” side. After the small mishap, the pair were almost flawless. By lunch, Laxman had passed 150 and Dravid reached his half-century. The pair kept on batting. Laxman and Dravid hardly gave any chances and next thing you know, India finish day four at 4-589.

Three hundred thirty-five runs scored in one day with no wickets lost.

Everyone bar Steve Waugh and Adam Gilchrist had a bowl on day four. The main bowling catalysts in Shane Warne, Glenn McGrath, Mark Kasprowicz and Jason Gillespie could not provide a single breakthrough during the day. With Laxman passing 250 and Dravid passing 150 on the day, India had turned a corner and was in a comfortable position of not losing the game.

Laxman would depart on day five for 281 as the fifth-wicket stand of 376 runs, and 104 overs came to an end. Dravid feel soon after for 180 as India declared at 7-657. With no chance of winning, Australia tried to bat out for a draw on the final day, only to be bowled out for 212.

India had pulled off a spectacular comeback and won from nowhere. In the history of Test cricket, the Kolkata Test of 2001 would be only the third time a team had won a Test match from following on.

Forget the Australian attack, not even injuries and illnesses could stop Laxman and Dravid. Dravid was down with a fever and still batted for seven and a half hours. Laxman had back problems while batting, and despite the pain, he nearly reached triple figures.

That partnership by Laxman and Dravid would change how Test cricket would be played in the future. Teams were suddenly scared to enforce the follow-on. Even with the option to enforce the follow-on, captains would prefer to bat again to ensure the opposition is batting last on wearing pitches to avoid the fate Steve Waugh had faced at Eden Gardens.

From defeat being so close for the Indians, Laxman and Dravid guided India towards pulling off the impossible. Australia were on the verge of a series win at the iconic Eden Gardens, and the duo denied them. The victory would see a series decider in Chennai where India chased down a nervy 155 by two wickets.

Before the second Test at Kolkata, Australia had won 16 Tests in a row. By the end of the three-match Test series against the Indians, India ended the winning streak and won the Test series 2-1.

Indian coach Ravi Shastri has delivered a passionate, proud speech to his players, after their stunning victory over Australia at the Gabba to claim the Border-Gavaskar Trophy. As if you didn’t already admire the visitors enough… 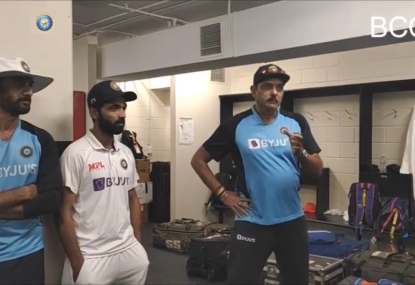 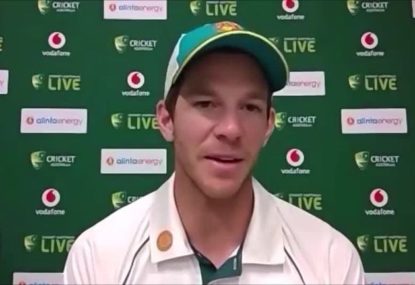 It doesn’t feel like all that long ago India were rolled for 36 in Adelaide and anything less than a 4-0 series win for Australia would have looked ordinary.