The agreement includes a home for the team at the Derwent Entertainment Centre, which will receive a $68.5 million Tasmanian Government-backed upgrade.

An in-principle agreement had been reached in late February, with the deal officially signed off on Thursday.

The Hobart Devils last featured in the national basketball competition in 1996 where they finished 12th of 14 teams.

NBL owner and executive chairman Larry Kestelman said it was great news for the NBL and “the people of Tasmania who have showed amazing passion to help bring this to life.”

“The ﬁnal agreement means we can start immediately on the next steps for the planning and upgrade of the DEC in preparation for a Tasmanian team to take to the court for the start of the 2021-22 season.”

After trailing by 15 points with just four minutes to go, Lebanon had a buzzer-beater heave for the win that went wide. Australia won… 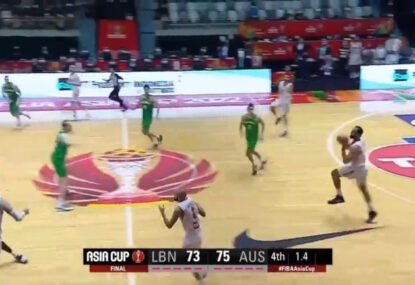