Check out my criteria in my previous articles.

5. Storm
Premierships – three
Members – 23,081
Crowds – 16,454
Index total – 39,535
The Storm are an influential club. Cameron Smith, however, is the most powerful player in the game due to his status on the back of a remarkable career that has no used-by stamp applied.

The Storm have built an impressive following from the days at the old Olympic Park to the modern AAMI Park. The key has been not to go to war with the AFL and this has got the local press on side. As perennial winners they will always get favourable TV time slots and with the backing of Jayco owner Bart Campbell they hold their own in the money stakes.

The NRL need the Storm to be an integral part of the national competition in the nation’s second largest capital city.

6. Knights
Premierships – two
Members – 19,648
Crowds – 17,257
Index total – 36,905
One of the best supported teams in a one-team town, the Knights are a destination other clubs envy. Always battlers since they came into the comp in 1988, things changed when junior tycoon Nathan Tinkler turned Newcastle into ‘Tinkler Town’ on the back of also buying the Newcastle Jets A-League team.

Blanket coverage in the Newcastle Herald, on radio and strong TV support make the Knights a very popular team. Boasting an Immortal in Andrew Johns and pivotal in the Super League war by staying solid with the ARL, the Knights’ influence at League Central cannot be underestimated, which is also due in part to its massive junior base.

7. Raiders
Premierships – three
Members – 19,493
Crowds – 14,262
Index total – 33,755
They were a powerhouse of the ’80s when big Mal Meninga was the superstar centre at club, Origin and international level. The Green Machine has had a lot of lean years but Ricky Stuart, the favourite son, has led them back to the top, making last year’s grand final.

Sharing Canberra Stadium with the ACT Brumbies does not put an unfair burden on the club. Never a team to attract international multinationals as shirt sponsors (remember Woodgers and Canberra Milk), they are a club that has engaged their region and have a massive following to boot.

Another team the league needs, they don’t shy away from cultivating support among the homesick politicians in Canberra for the cold winter sitting days winter. 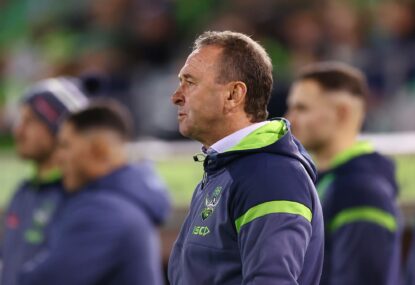