The first four events have given golf fans a little bit of everything such as big improvers to coronavirus cases – to trying to pick a winner.

Here are my four talking points from the first four events back after the coronavirus break.

1. Coronavirus positives
Like a lot of sports, golf has had its fair share of coronavirus talk and positive cases. Through the four events played so far, only two players have been found positive to have coronavirus. Nick Watney and Denny McCarthy are the two players so far who had to withdraw due to positive tests.

Nick Watney withdrew after Round 2 of the RBC Heritage while Denny McCarthy withdrew the Travellers Championship.

Caddies haven’t been lucky either with Ken Comboy and Ricky Elliot, who caddies for Graeme McDowell and Brooks Kopeka, have also had positive coronavirus tests, with both players withdrawing from the Travellers Championship.

Out of the 11 players who have played at least one of the four events from the restart, there have been 16 missed cuts with only six cuts made with Matt Jones having the best finish out of the lot with a T38 finish.

Australian golf fans will be hoping that the luck changes for Australians playing abroad and we will soon see some Aussies closer to the top of the leaderboard.

3. Bryson’s big gains pay off
One of the biggest stories coming out of the restart is how much muscle Bryson DeChambeau has gained over the coronavirus break. DeChambeau put on 18 kilos of muscle and now lead the tour for driving distance, at 323 yards per drive. In comparison, DeChambeau was tied 34th for drives last year, averaging 302.5 yards per drive.

He has added 20.5 yards to his drives from last year which has paid dividends for him so far after the restart finishing T3, T8, and T6 before winning the Rocket Mortgage Classic over the weekend with an impressive three-shot win as he scored 23 under for the tournament.

Choosing winners has been difficult to pick and it will be the same with the Workday Charity Open which starts this Thursday.

Players such as Jordan Spieth and Rickie Fowler have shown potential but haven’t played four days of consistently good golf. Whilst Abraham Ancer and Cameron Champ have looked threatening. However, the upcoming events could provide some interesting results, so picking a winner will prove difficult.

The next event is the Workday Charity Open at Muirfield Golf Club in Ohio which starts this Thursday.

Danny Lee takes SIX putts on one hole at the US Open!

After withdrawing from the US Open due to a wrist injury (perhaps caused by what happens in the video above), golf fans were wondering what happened with New Zealand golfer Danny Lee after seeing the scorecard showed Lee finished with a 9 on the par 4 18th. 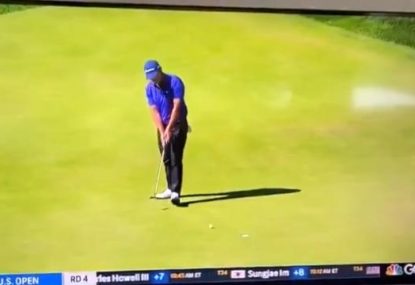 Danny Lee takes SIX putts on one hole at the US Open!

American Bryson DeChambeau has claimed his first major championship by winning the US Open at Winged Foot in New York.

The US Open is historically the toughest scoring major and Winged Foot will be no different. Here is a comprehensive look at who has a chance over the four days.

Collin Morikawa says he will embrace the spotlight after announcing himself as golf’s newest superstar with a breakthrough major victory at a US PGA Championship for the ages.

The Australian Open golf championship won’t be played this year as the COVID-19 pandemic forces organisers to look at dates early next year.

Collin Morikawa has won his second PGA title after beating Justin Thomas in a playoff at the Workday Charity Open.