You only have to mention the three Ws to most fans and the names Clyde Walcott, Everton Weekes and Frank Worrell roll off the tongue.

Many pieces have been written over the years about the best cricket teams and just in past few months, we’ve seen a plethora of great names being trotted out, as Roar pundits try to come up with their best ever Test XIs from various countries.

But what about cricket’s next best Test XIs? Who are the guys who are not quite as good as Don Bradman or Shane Warne or Jack Hobbs?

This article is my attempt to come up with a next best West Indies Test XI. There’s no set criteria, simply personal opinion.

I also prefer to go with the average of the opening partnership, rather than the volume of runs scored, which is generally a direct relation to the number of innings played together.

In this case, the best West Indian opening pair was Jeff Stollmeyer and Allan Rae (average 71.00). The next best has been Gordon Greenidge and Roy Fredericks (average 53.10).

Fans of Desmond Haynes would certainly be questioning this, but although he and Greenidge were a fantastic opening pair across 148 innings, they averaged 46.63, which is significantly less than Fredericks and Greenidge.

Numbers three and four
George Headley, the “black Bradman”, is the obvious choice for the best number three in West Indies cricket and his partner at four is contentious.

In this case I’ve gone with average over intimidation and I have Sir Everton Weekes at four. This means my next best XI includes the master blaster, Sir Viv Richards, at three and Rohan Kanhai at four.

Richards was and still is one of the best batsmen of the past 50 years, but his average was a full eight runs below Weekes and a wider margin to Headley’s. His swagger and confidence was simply wonderful, but Headley must have inspired the same dread in the opposition, given his numbers (an average of 60.83 and a hundred every fourth innings).

Kanhai was a wonderful player for the best part of 17 years, who could bat just about anywhere in the order. He was also a useful wicketkeeper.

Richie Richardson is the player dead unlucky to miss out. He had something of Richards’ swagger, but Kanhai was just a tad better bat.

Numbers five and six
Brian Lara and Sir Garfield Sobers would be in the best XI, so this leaves two outstanding cricketers for the next best XI.

Shivnarine Chanderpaul was a batsman who was a key part of a fading West Indian side from his debut as a 19-year-old in 1994, until the last of his 164 Tests in 2015 at the age of 40. Along the way he made over 11,000 runs and averaged 51.37. He was far from the most stylish batsman the West Indies have produced, but he was certainly one of the most productive.

The captain of this side and a great batsman in his own right is Sir Frank Worrell. He is sometimes overlooked as a cricketer, with most focusing on his deeds as the first black captain of a West Indies Test team in a series, but Worrell averaged 49.48 and was the most elegant of the three Ws. He was a steady bowler as well, who was good enough to take 69 wickets including 7-70 against a strong England line-up in 1957.

Number seven
Test wicketkeeping has become as much about being able to bat as it is about snaring chances. Sir Clyde Walcott was a useful keeper but a wonderful batsman, averaging 56.68 across his career. This makes him a lock for the best Test XI.

This means Jeffrey Dujon is the keeper in the next best XI. Dujon was terrific to watch behind the stumps, wonderfully athletic, which he needed to be given the attacks that he was expected to take. His batting average of just over 31 doesn’t do justice to his actual talent. He’d also be something of a talisman for this squad, having never played in a losing Test series for the West Indies.

Numbers eight, nine and ten
The core of any great West Indian XI is their fast bowlers, but who are the best three as well as the next best three out of the outstanding quicks that have worn the maroon Test cap?

In the end I used two simple parameters – which bowlers had great Test figures coupled with the intimidation factor? Malcolm Marshall, Joel Garner and Curtly Ambrose best fitted these measures, but only by a split hair.

My next best are Andy Roberts, Michael Holding and Ian Bishop. 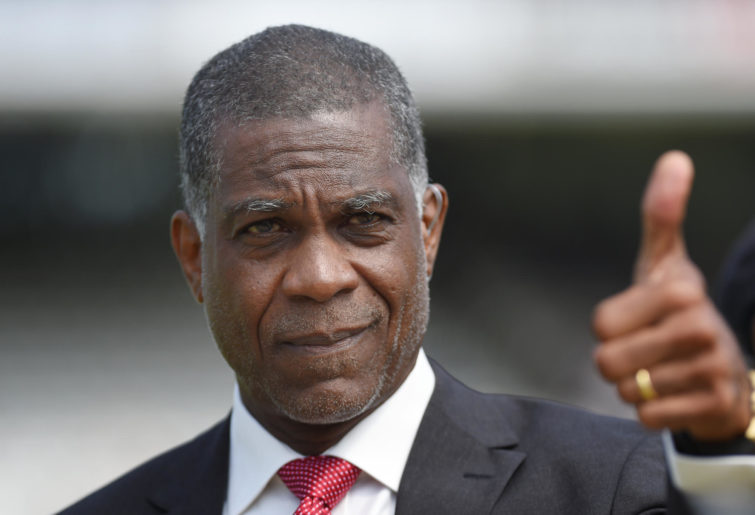 Roberts looked intimidating when he ran into bowl and his bouncer put the frighteners up plenty of good Test batsman.

Holding, well, he has to be here, simply because of his nickname, ‘Whispering Death’.

Ian Bishop might seem like a surprise choice but injuries killed his Test career. When he was on, he was seriously quick and could move the ball sharply off the pitch at pace.

Number 11
It’s accepted practice that all best-of Test XIs have to have a spinner, but do they? The West Indies are not exactly a breeding ground for world-class spinners, but they surely are for seriously quick fast bowlers.

The great West Indian teams of the ’80s and ’90s often played just the four quicks and for good reason. They were some of the best bowlers the game has seen and the results through this period of Windies dominance speak for themselves.

In deference to traditionalists, I’ve hedged my bets and named two number XIs. One is a spinner and the other is a fast bowler, but both are genuine number 11s.

Sonny Ramadhin was part of the famous Alf Valentine/Ramadhin duo that caused England lots of angst when they toured in 1950. They, as much as anyone, were responsible for the West Indies winning their first series on English soil. I could have just as easily chosen Valentine. Both were fine spinners who could bowl very long spells and remain deadly accurate.

Courtney Walsh was an outstanding fast bowler, not only for his aggregate or average, but for his longevity as a Test cricketer. He’s not generally mentioned in the top tier of West Indian quicks, but his figures stack up against most fast bowlers from any other Test-playing nation and are only slightly less than some of his peers. Both he and Ramadhin were rabbits with the bat and no chance to bat higher than 11.

This would be a fun Test XI to watch and there’s no doubt they’d give the best West Indies XI a serious run for their money. It’s quite amazing how island nations with such small populations can produce so many wonderful players.

Hopefully in the coming weeks, the current squad in England can enhance their claims to make this or the best West Indian XI.

Ahh, West Indies. No matter how badly the West Indian board has treated the players over the past 15 years, come T20 World Cups they’ll entertain the fans. With Phil Simmons at the helm for a second time and a much more competent board, West Indies are building a strong T20 squad in time for […]