On Day 2 of the first Test between England and the West Indies, Richard Kettleborough declined three LBW calls. All three of those were reviewed, and given out on review.

On one hand, LBWs are less hard fact and more opinion. Umpires ask was the ball going to collide with the stumps after pitching outside off and hitting in line, without the bat making contact?

On the other hand, three incorrect decisions from a single umpire who is umpiring at home in favour of the home side is a bit suspicious.

Therefore, I’ll go through each of these referred decisions, and I will examine them.

Shannon Gabriel bowls from wide on the crease, around the wicket to the left-handed Burns. Burns steps a long way across his stumps, almost concealing half of the off stump. The ball is full, pitching on middle and off, at just short of a yorker length (if it’s short of a yorker at all). Burns plays across the line, trying to dab it down onto the leg side. He misses everything, and ties himself into a knot.

This wicket – funnily enough – is one I’d give Kettleborough a pass on. Right-arm around is a difficult one to adjudicate live. You’re seeing the angle, and Gabriel was coming in very wide, which increases the angle further. Live, the ball looked as though it impacted him just in front of middle and leg, with the angle indicating it might go further. The ball straightened a little after bouncing – which is something Gabriel did quite a bit throughout Day 2 – and because of this, the ball was shown via Hawkeye to be cannoning into leg stump.

This one I’d categorise merely as a good review. There was easily enough doubt there live for Kettleborough’s decision to make sense.

This is where things get a bit murkier.

Holder’s regular point of release is quite wide of the pitch bowling right-arm over, and he’s extremely tall. There were a few points over the course of the day where Ben Stokes – someone who possesses a truly remarkable eye for picking up length and playing good, deep innings – failed to pick up the length, and failed to read the bounce of the ball. Holder is a very good bowler. He doesn’t truly need outrageous pace, just his height and variations. Some bounce, some don’t.

On this ball, Holder starts his action in his regular position – wide of the crease – but takes a large step back in closer to the stumps. His release point for this ball is designed to decrease the angle he usually bowls with, meaning that the trajectory of this ball will be much straighter than normal. The ball’s length is very full, almost true half volley length, and the ball nips in a little off the pitch. It hits Crawley in line with off, just on the knee roll of his pads while he’s crouched in a half completed defensive shot.

Holder is very tall, but this ball did not bounce that much nor was it short. The angle was reduced, and the ball came back in from off not a lot, but a little. There was plenty to suggest that the ball was hitting the stumps here, and nothing live to suggest he hit it. Crawley didn’t know very much about this one at all.

I would suggest that this is the first suspect decision of the day. This looked out live, looked dodgy as they reviewed the footage, and was overturned on review.

Holder comes from wide on the crease, bowls a ball on the fuller side of a good length. The ball skids through, going more or less dead straight for middle. The ball hits Archer in the dead centre of his front leg, in front of middle and off, below the knee roll. It should be textbook. There’s no suggestion of bat. Archer would be among the first to say he didn’t know much about that one.

There’s not much defending this one, beyond the fact that Holder’s tall and bowls with an angle that’s bigger than most right-arm bowlers, but this is a stinker.

It’s here that things get interesting. There were a further two more additional decisions overturned on the day, both of them going for the home side. I will have a look at them now, to see if they hold up to scrutiny.

Anderson’s pace was well up on the day, but for whatever reason the ball wasn’t swinging as much for him as usual in English conditions. He, like the West Indian bowlers, had more movement of the deck than in the air. Pre-match previews suggested that the pitch was a little dry. This makes the choice by the West Indies not to play a spinner odd, but credit to them as it didn’t hurt them very much.

On this ball, Anderson is bowling right-arm over to the left-handed Campbell. The ball is aimed just outside off, but comes back in a tiny bit in the air before nipping away off the deck. It’s a very good ball. Campbell is batting on the crease, takes a definitive stride forward, and is hit roughly in line with middle and leg on his back leg, as the cut of the ball changed sufficiently that he missed it.

Problem is, it’s pitching outside leg.

At international level, if you’ve given something out off LBW and it’s pitching outside leg, it’s a poor decision. Now, the ball did a bit, and he had a good hard think, but that’s the first thing on an umpire’s checklist for LBW.

This referral is the first one featuring the other umpire Richard Illingworth.

Beyond all else, this one’s the textbook definition of a risky leave. Anderson’s bowling around the wicket at the left hander, and the ball is angling in at him. It hints at swinging away without really doing so. The ball holds its line, pitching to hit the top of middle and leg, well above the knee roll and almost onto Campbell’s thigh. It’s hit him very high up, and so it was shown on review. The ball clearly misses the stumps.

I’m not going to have a crack at Illingworth for this one. You don’t leave on height on the stumps in England.

Now, to the crux of this piece. 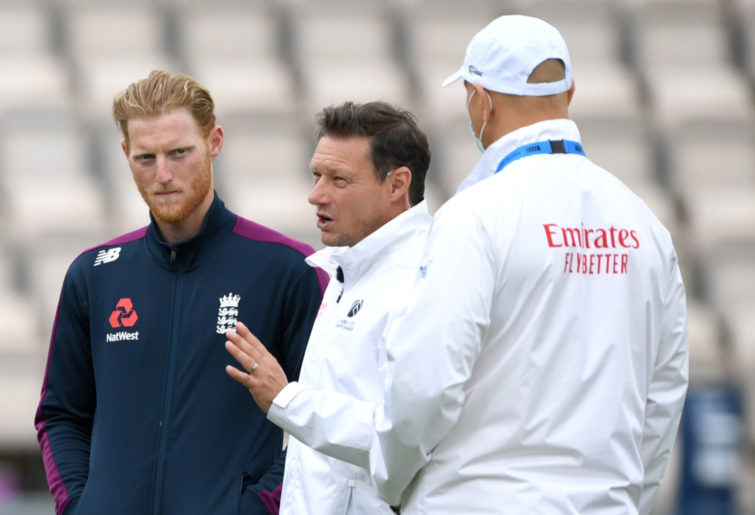 I may not have a crack at Illingworth for giving a leave on height on the stumps out LBW in England, but we had numerous decisions earlier in the same day that refused to give LBWs based on height that went completely the other way. We have two very well credentialled and thought-of umpires, and we had five incorrect decisions, all of which went against the touring side and for the home side, where the umpires are also from.

The appearance of impartiality is vital to how sport operates. This piece itself functions due to the fact that the above looks bad. I definitely do not think Illingworth or Kettleborough were cheating in favour of their home nation, and that is a ridiculous theory. However, there is a real issue at play here when I can make this kind of an argument without prejudice or concoction.

Ultimately, these times are troubling for everyone, and cricket itself faces any number of challenges. There is a reason why this is the first series played since the end of cricket season in Australia. But there was a real push at the end of the last Ashes series to move to non-independent umpires, thanks to Joel Wilson’s efforts in that series, and it behoves us to examine what would happen if such were discussed or even encouraged again once cricket again is played between nations.

This was not a hard argument to make. Ask yourself, would it be just as easy to make of Australian or Indian umpires?