For the most part, it’s been a blessed experience. The first game I ever attended was Paul Kelly and Andrew Dunkley’s farewell against Richmond in 2002 meaning, of all the full seasons I’ve been a supporter, I’ve been privileged to experience as many premierships as I have non-finals appearances.

Most Swans fans regard 2005 as the zenith, but hugging my mother – who’d just been discharged from a scary hospital stay – as the siren sounded in 2012 was a golden moment I will cherish forever.

There’s been heartbreak. The 2016 grand final fell on the day of my 23rd birthday, while the 2014 grand final finished an hour before a joint birthday party between myself and two (non-football loving) friends, making me a despondent, atmosphere-sucking husk of a partygoer on both occasions.

(The 2006 decider was the day before my 13th birthday, but a trip to Timezone and plenty of Krispy Kremes quickly assuaged the previous day’s disappointment.)

But now, for the first time in my footballing life, the Swans are in a bit of a pickle.

I didn’t have us inside the top eight coming into 2020, but I thought the widespread predictions of wooden spoon contention were off the mark. The Swans were in the thick of the finals race until Round 15 last season, when they lost their last ruckman and suffered six defeats in a row – four of them by ten points or fewer.

Sitting at the SCG last August as Lance Franklin, Jarrad McVeigh, Kieren Jack, Heath Grundy and Nick Smith all got chaired off the ground, I thought we’d be fine. We’d just crushed the Saints by 45 points and the retiring quartet had barely played in 2019 anyway.

But the last three weeks have seen the club produce some of the worst football I’ve seen them play. To cap it off, yesterday it was revealed Isaac Heeney’s ankle injury will rule him out for the season, while Josh Kennedy will miss six to eight weeks with his knee complaint. Far out.

Before the injury news broke, this column was going to be titled “The Swans aren’t as bad as you think they are” and would have made the case for them climbing out of the bottom four. Never mind – 2020 is now a write-off and it’s time for John Longmire and co. to look firmly to the future and shuffle the magnets accordingly.

They’ve got the green shoots in place and don’t look to be at sea when it comes to list management, but it’s time to fully embrace the rebuild.

1) Put Callum Mills in the bloody midfield!
Mills’ 2016 Rising Star win was remarkable for the fact he did it playing a position he almost never did as a junior. At the time, Sydney’s vaunted midfield brigade of Kennedy, Dan Hannebery, Tom Mitchell, Luke Parker and Kieren Jack meant the highly-touted Academy product simply had to play down back to get a game.

He did it well, and his ball use off half-back is handy, but he’s been exposed badly in one-on-one contests and hasn’t really taken the next step. 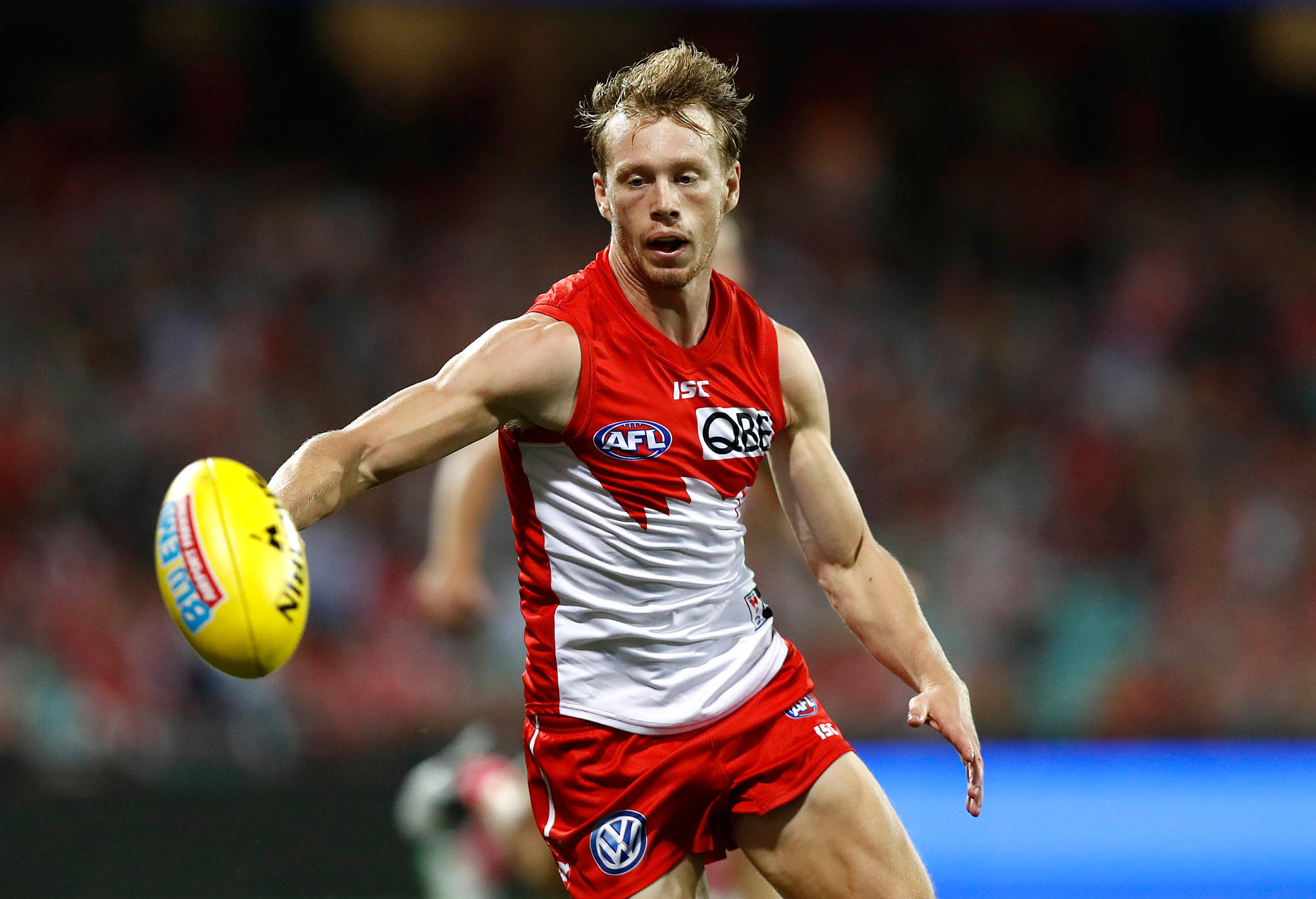 It’s time to put Mills in the middle. (Photo by Ryan Pierse/Getty Images)

But with Jack retired, Mitchell a Hawk, Hannebery a Saint and Kennedy on the sidelines, it’s time to put Mills up the guts and get him used to the rigours of playing in an AFL-level midfield.

At 189cm and 83kg, he has the body type versatile enough to compete at ground level and be an aerial threat. While he’ll likely never have the bulk necessary to be a contested ball bull – he’s 14kg lighter than Kennedy despite being the same height – the Swans desperately need good outside users.

Dylan Stephens looked good on debut and I’ve been impressed with the progression of Oliver Florent and James Rowbottom. Throw Mills into the mix with George Hewett and Parker and you’ve got a good young midfield that covers all the bases.

Sure, Dawson is arguably the best field kick in the side, but it seems strange to have him outside the back 50 if your current game plan – as bemoaned by Damien Hardwick – is to clog up the back 50 and launch counterattacks.

Hayward in defence, however, simply makes no sense to me. He’s got damaging mid-sized forward written all over him and, if Tom Papley tries again to leave this offseason, the Swans will desperately need crumbers up forward. The forward line has been so dysfunctional in the last three matches anyway, surely you’d put 2018’s second-leading goalkicker up forward pronto.

Make the move this week.

3) Don’t be afraid to throw Sam Reid down back when he returns
The injury list is awful right now, but there are some reinforcements on the way. Tom McCartin’s imminent return gives the forward line a structure they’ve desperately needed, while also lending vital aerial support to Nick Blakey. Callum Sinclair is also a chance to return in the ruck this week, giving the side some much-needed flexibility with where the talls can play too.

Sam Reid is not too far behind, however, and a move down back in the absences of Kaiden Brand, Lewis Melican and Aliir Aliir might be the right one. 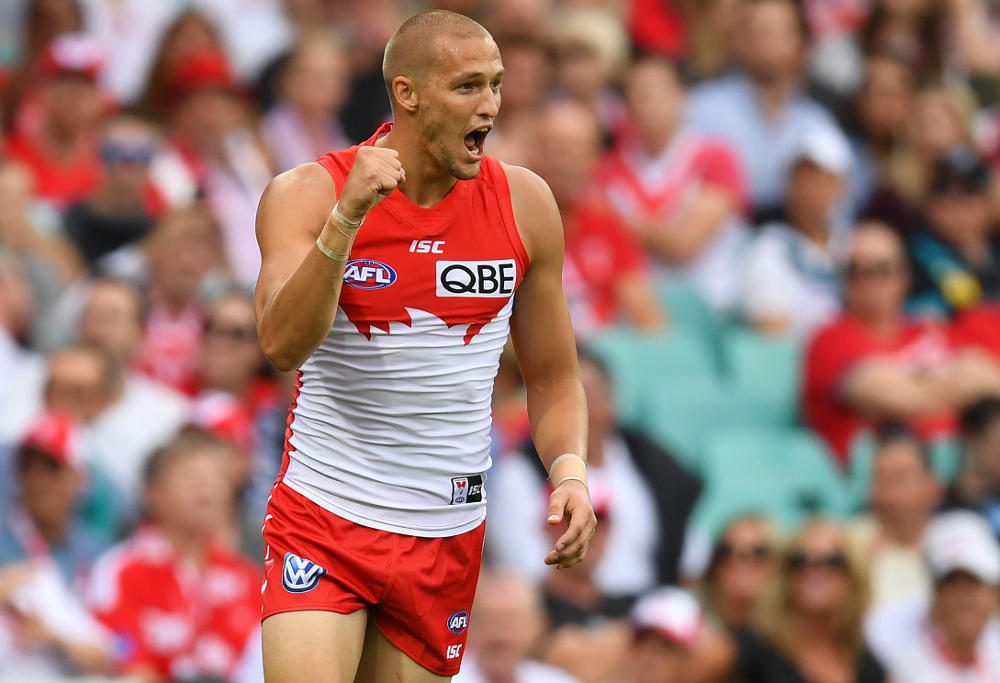 Could Sam Reid be sent down back? (AAP Image/Dean Lewins)

The injury-plagued 28-year-old is unlikely to be part of the next Swans premiership, so I’d much rather have him floated down back to give Dane Rampe support than have McCartin’s development interrupted.

4) Move heaven and earth to find a proper key defender
On that note, the Swans really need to unearth their key defender of the future.

Rampe, as good as he’s been, is 30 and only 187cm tall. Aliir – as I’ve said previously – is better as a spare tall, while his late replacement on Sunday, Robbie Fox is also on the shorter side. Melican is the exciting one but, after a stunning debut season in 2017, has plateaued on the back of injuries and form, while Brand is clearly a stopgap solution.

Sydney’s days at the top were thanks in large part to the superb key defensive pairing of Ted Richards and Heath Grundy. The game may change over the years but, especially playing at the short SCG, the Swans will always need good tall defenders to play well.

It’s clear why they’ve been so keen on Darcy Moore over the last few seasons and you’d imagine he’ll be their target again this offseason. I don’t know who’s floating around in the draft this season (you want Josh Elliott for that), but the Swans would want to use pick 2 on a lockdown defender or another strong inside midfielder.