Sam Powell-Pepper had his best game for the Power as they ran over the top of the GWS Giants to the tune of 17 points and went on their way to staying top of the AFL ladder for another week.

The young midfielder was at his bullocking best on Sunday afternoon, busting packs the only way he knows how and often getting Port on the front foot in what was a tough, tense, contested brand of football.

Sam Powell-Pepper had a superb game, gathering 22 disposals, eight of which were contested, kicking a crucial goal along with three clearances. He led the team in metres gained with 442, had six inside 50s while going at 77 per cent disposal efficiency, something that has been his main area of weakness since he debuted.

For me he was Port Adelaide’s best player on the day, and it was his willingness to run and hassle the opposition as he led the side in pressure acts with 24 was his major feature.

Hats off to Sam it must be said, as he has been much the maligned figure over the past season or so but credit where it is due and Sunday’s performance should make people hold off on their criticism of the young midfielder, but as with any player he just has to do it consistently.

Honourable Mention: Kane Farrell
Another who surprised on Sunday afternoon was Kane Farrell. Deployed on the wing by Ken Hinkley, the classy left footer had himself a day too, while not as obvious to the neutrals, Power fans could not help but notice his performance me being one.

Farrell had 19 disposals, kicked a goal which was a booming shot from way outside 50 that had some serious power behind it, had two clearances along with three inside 50s.

Add to that his 400 metres gained which was second to Powell-Pepper and a monster eight score involvements, he announced himself to Hinkley and the coaching staff that perhaps the wing is his position now, having been played as a half forward for much of his young career.

If Sunday’s game is anything to go by Xavier Durrsma might have a hard time getting his wing back.

If Ken Hinkley was looking for a response to last week’s fade out against St Kilda, then he got it and then some. Port Adelaide utterly dominated a disappointing Melbourne side to the tune of 51 points at the Gabba on Thursday night. It was clear from the outset that Port meant business with Mitch […]

Another shade of Power star Gray

Robbie Gray gave Port Adelaide coach Ken Hinkley plenty more to smile about when he put his body on the line in Thursday night’s big win over Melbourne. 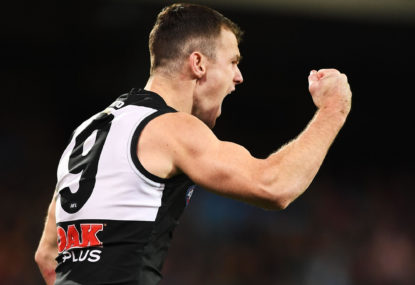 Another shade of Power star Gray