When a player ascends from the provincial level to fully-fledged All Black, he already has a rounded skill-set and is ready to play. The progression is seamless.

But some cracks in the great edifice of Kiwi back three selection began to appear just before the 2019 World Cup. On the right wing or as a fullback, Ben Smith had been the best player in the world for over a decade, while on the left Rieko Ioane had already been shortlisted twice for World Player of the Year at the tender age of 21.

After the 47-26 drubbing by the Wallabies in the first Bledisloe Cup match of 2019, both the wise old head and the new finishing sensation were abruptly dropped.

They were replaced by two relatively untried wings from the Crusaders, Sevu Reece and George Bridge. New Zealand won the return fixture even more conclusively, 36-0, and Reece and Bridge did not pause to look back over their shoulders.

Both remained Steve Hansen’s first choices all the way through the World Cup in Japan. With the benefit of hindsight, the inclusion of Smith might have provided better value in the knockout stages of the competition, and the debate about who should play on the wings for New Zealand is still wide open one year later.

One of the fascinating aspects of that debate is how players from the Crusaders are trusted to deliver on the Test stage, when on occasion the talent base is no better, or may even be inferior to some of their regional rivals.

It is a tribute both to the Crusaders’ development program for young players, but also to how they position their playing philosophy. Traditionally they are the most forward-oriented of any Kiwi Super Rugby franchise, and they play a game somewhere between the requirements of Super Rugby and the international version of the game.

The work-rate off the ball, and the excellence in small technical details of players from the Crusaders are two areas which typically set them apart, and encourages their fast-tracking into the All Blacks environment.

Left wing George Bridge is a primary example. Where Sevu Reece is seen as an X-factor attacker who can create something out of nothing, Bridge is viewed more as a younger version of Smith. Game intelligence is his forte, and he has the rare knack of making excellent decisions and involving himself in a high proportion of critical plays. He can become a ‘key influencer’ on the rugby field.

As his teammate Richie Mo’unga put it, “George is someone who just performs every week. As a high-performance athlete that’s sometimes hard to do but he’s shown that he has a mature head and is able to do his role consistently and with a lot of effort. I love that about George and I love how hard he works around the park.”

The debate remains very much alive and kicking after New Zealand’s semi-final loss to England in Yokohama, and the weekend clash between the Crusaders and a resurgent Blues side brought it to a head.

The form wingers in Super Rugby Aotearoa have been the Auckland pair of Caleb Clarke and Mark Telea, both of whom have delivered some dominant attacking displays with ball in hand.

One of the major planks in the Crusaders’ game-plan for the match was to pin Telea down in situations where they clearly felt he would be at a disadvantage against Bridge, and the contest between the two was utterly compelling from beginning to end.

With the new law interpretations coming into force, kicking has been at a premium in SRA. There has been an average of 43 kicks per game over the five rounds thus far, and there were 49 at the Orangetheory stadium on Saturday – 57 per cent of which were made by the home team.

Almost all of the contestable portion of those kicks were made down the side defended by Mark Telea, and chased down by George Bridge. This is just one of the unsung wing chores at which Bridge excels.

The key to the defensive win (even when the receiver behind him misses the ball) is Telea’s ability to run the correct blocking line, and jam on the brakes about five metres away from the ‘drop zone’ 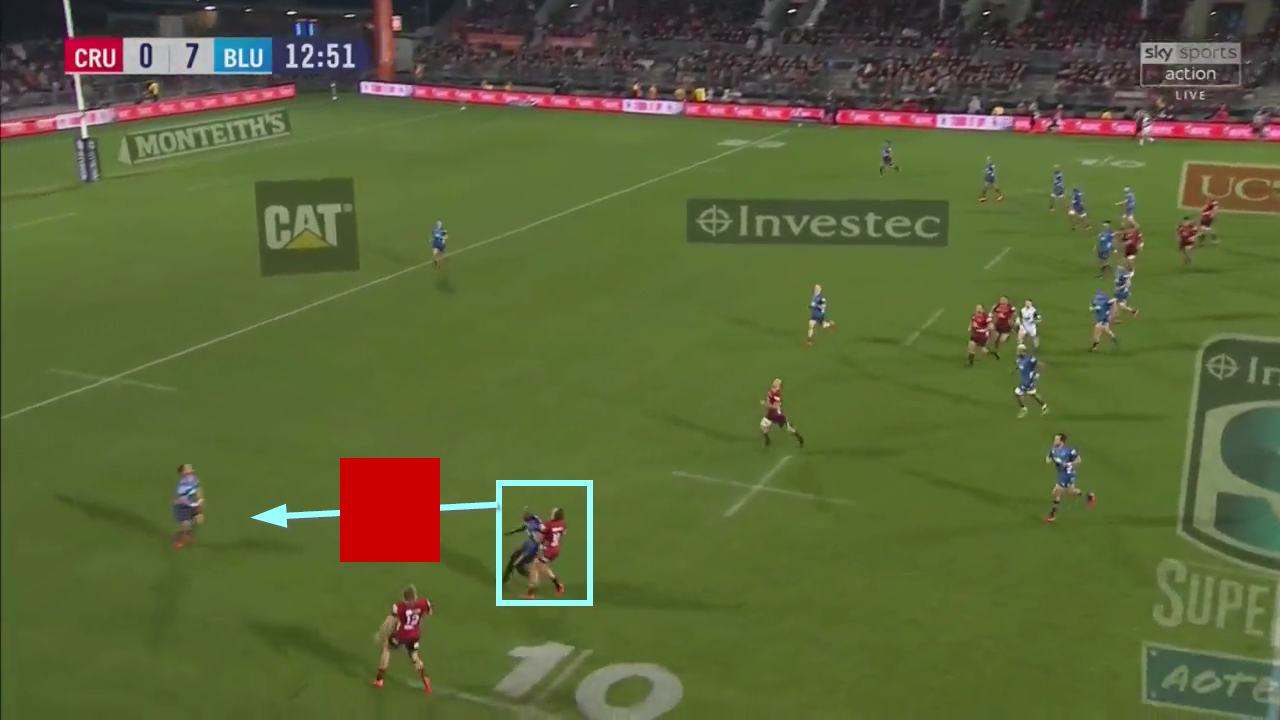 If Bridge cannot penetrate into the space between the blocker (Telea) and the catcher (no.10 Otere Black), the cards will fall in favour of the defence. At the same time, it is a sign of Crusaders’ values at work that the player who gets back to make the saving tackle on Mark Telea 50 metres further downfield is none other than… George Bridge.

In the first example, Bridge gets a short push on the blocker (Blues’ no.9 Finlay Christie) at just the right moment to get into the vital gap, in the second Telea loses his concentration and allows Bridge to break past the block and turn the high ball over. 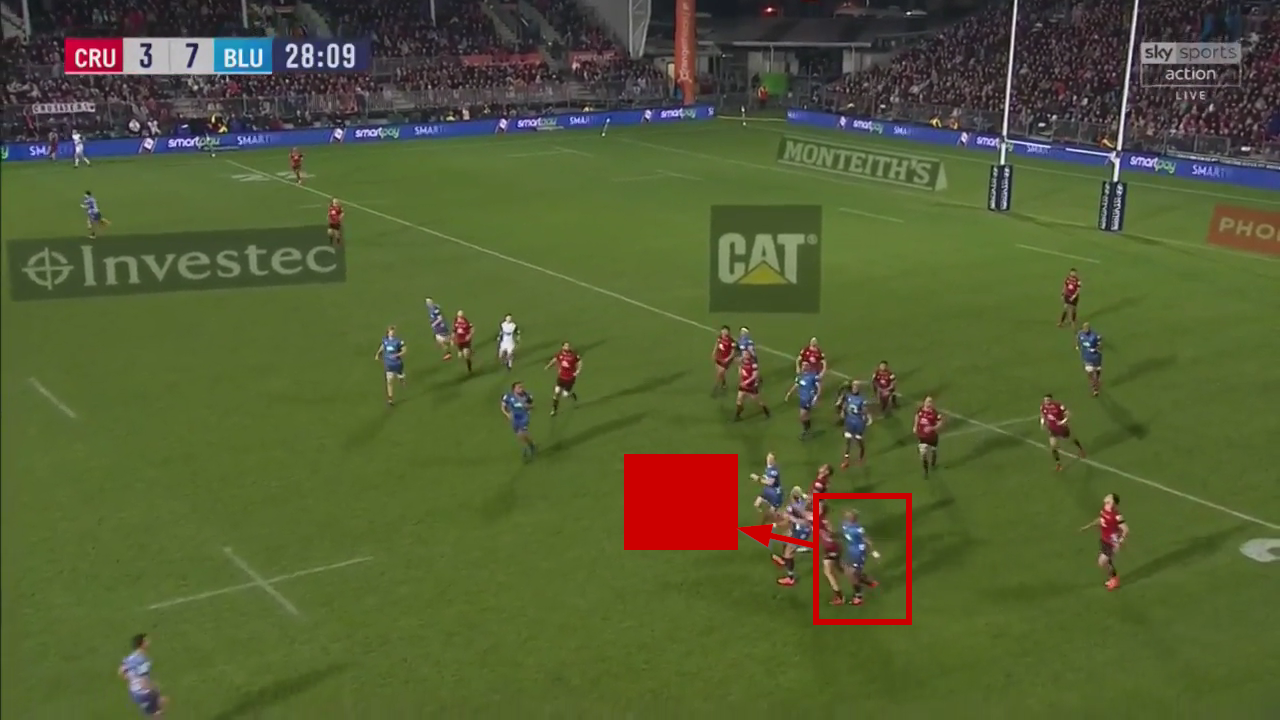 The longer the game went on, the more important this local scenario – with Telea defending, and Bridge chasing high kicks – became to the overall fate of the match,

In the second of these two instances, Telea was penalised for shouldering Bridge off his line of chase, though Bridge (being a Crusader) goes on to complete the tackle anyway.

Shortly afterwards, the Blues’ wingman might have been pinged again, after the ball ricocheted between him and the defender moving up from the backfield (no.12 Harry Plummer), and Telea caught the ball in an offside position. The referee took pity and just awarded a scrum for the knock-on but, by this stage, Bridge had already won his battle – he is in the gap between Telea and Plummer, and the defence does not win too many of the battles when this has occurred. 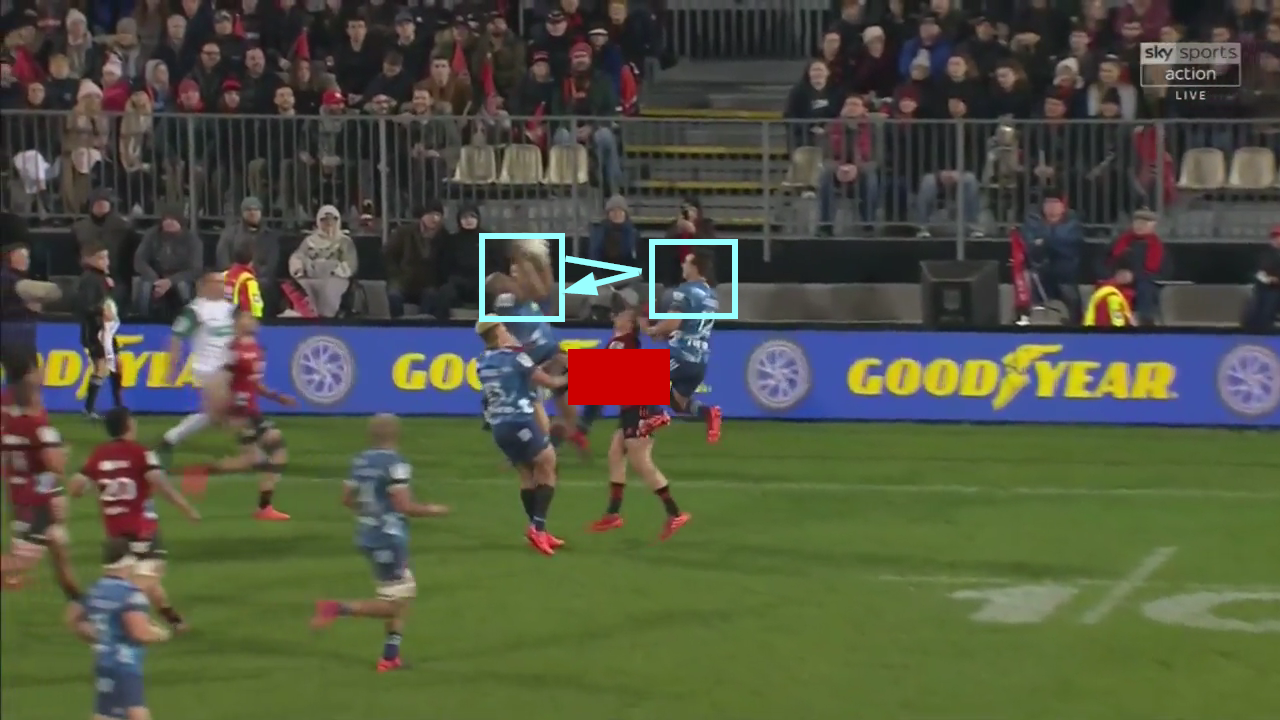 The pattern of events was largely repeated when the Crusaders attacked down Telea’s side with ball in hand. Again, it started positively for the Blues’ right wing, with an interception in the first minute of the game.

Telea was frequently positioned on the 15-metre line to shoot out of the line, and more often than not he was not the widest defender on his side. 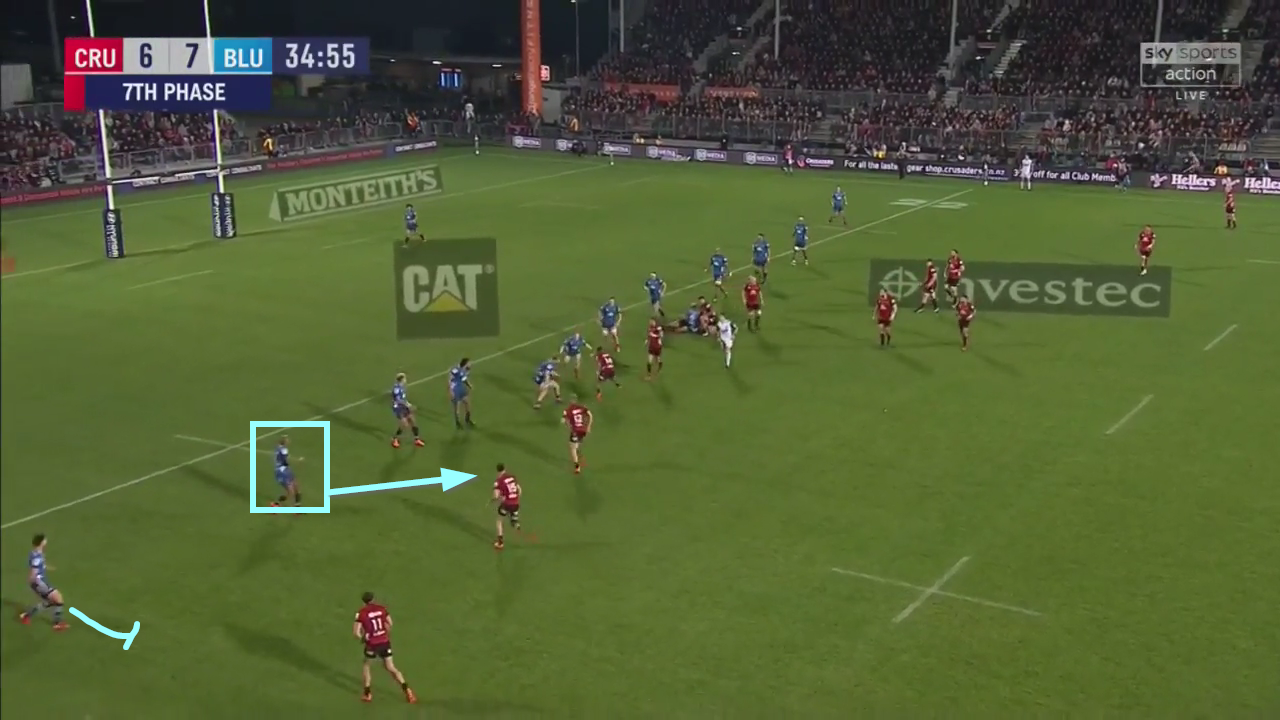 Here, Otere Black is the last defender, not the right wing looking to blitz inside him.

By the middle of the second period, the Crusaders had worked out what to expect from Mark Telea in defence and they had a definitive answer ready.

With Telea on a blitz and backfield defender well behind him, Richie Mo’unga double-pumps instead of passing immediately, and that is enough to take Telea’s rush past the ball and open up the passing lane to George Bridge on the left touch-line. The rest, as they say, is now history.

Summary
George Bridge is not necessarily a better or more talented individual than Mark Telea – and he may not prove ultimately to be the second coming of Ben Smith – but the Crusaders found a way to define play down their side of field in terms of Bridge’s strengths, and Telea’s weaknesses. Bridge’s typically high work rate off the ball took care of the rest.

The Crusaders’ kicking game also negated the threat of Caleb Clarke by starving him of ball, with all of the contestable kicks taking place on the other side of the field.

With the men from Canterbury finishing as 26-15 winners against their closest rivals in Super Rugby Aotearoa, this is likely to project Sevu Reece and George Bridge ahead of the competitors for a post in the All Blacks, just as it did before the 2019 World Cup.

The Crusaders’ culture and development program places their players closer to the possibility of Test football than any other franchise in New Zealand. Whether their players have the talent base to justify the leap to a higher level may be another matter.

I would guess that Caleb Clarke in particular, will have something to say about that question when the prospect of Test matches eventually materialises again later this year, like an oasis in the desert.