Steve Corica comes up against his former assistant Ufuk Talay for the third time this season, with the previous results being Sydney winning 2-1 at home in Round 2, and a 2-2 draw in Wellington during Round 11. 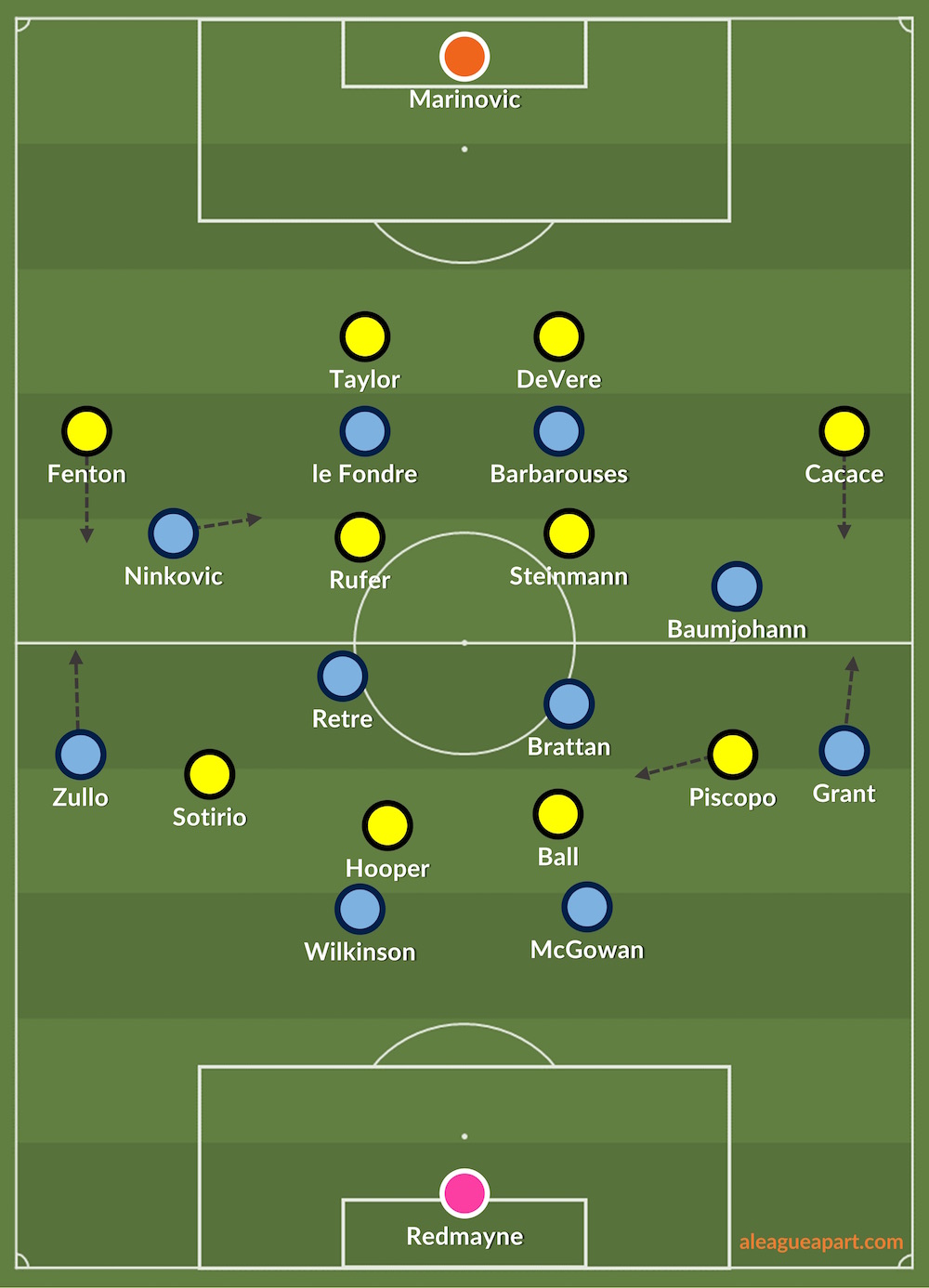 Selection
It looks like both managers will be able to call upon a full set of players. They’ve been luckier than other squads to not have lost any of their foreign contingent. Barring any injuries or fitness issues, the squads should both be coming out quite strong.

Sydney FC
Michael Zullo has recovered from his injury, which kept him from playing a full 90 minutes since November. While Joel King has stepped up in his absence, Zullo could be restored back to the starting line-up, providing a bit more technical quality and attacking thrust down the left.

Anthony Caceres could potentially start, as he provides a more defensive option than both Milos Ninkovic and Alex Baumjohann.

Wellington Phoenix
There has been speculation in the media that Liberato Cacace has been attracting overseas attention, and potentially may not be starting in order to ensure that he gets a transfer without being injured. If that’s the case, Walter Scott will deputise.

Louis Fenton returns from an injury sustained in November, which originally would have kept him out for the entire season. He played in the most recent Wellington friendly (against Western Sydney Wanderers), where he provided an assist from a cross. Tim Payne will likely drop to the bench.

Cameron Devlin misses out due to suspension from an accumulation of five yellow cards. Alex Rufer is likely to take his spot in midfield.

Ulises Davila has had a much shorter pre-season than the rest of the team, only coming out of hotel quarantine two weeks ago. We’re likely to see both Reno Piscopo and Jaushua Sotirio from the start, with Davila coming on as a sub as the game goes on.

Remarkable similarities
On the face of it, both teams’ characteristics and styles of play are remarkably similar.
• Always play in a 4-4-2 (or 4-2-2-2) formation
• Attacking midfielders who come inside to find space rather than traditional wingers
• Fullbacks who get forward to attack
• A deep-lying playmaker who pulls the strings (Luke Brattan and Cameron Devlin)
• And best of all, a five-foot-nine English all-rounded striker that joined from the English Championship (Adam le Fondre and Gary Hooper)

Spaces in between the lines
While the formations match up against each other, it doesn’t mean that each of the players will be duelling with their direct opponent. Both teams like to defend fairly passively, covering the spaces zonally in the centre, while the 4-4-2 provides structure and compactness through three lines horizontally and four lines vertically. As a result, in order to progress the ball forward through the centre, players must find spaces in between the lines, which can create dilemmas for the defending team – who should leave the line structure to cover?

A common example that both sides use is shown below. The attacking midfielder (who starts out wide) comes inside to find space in between two sets of lines in between the midfield and defensive line, while also sitting in between the left-sided players and the centre-left players. 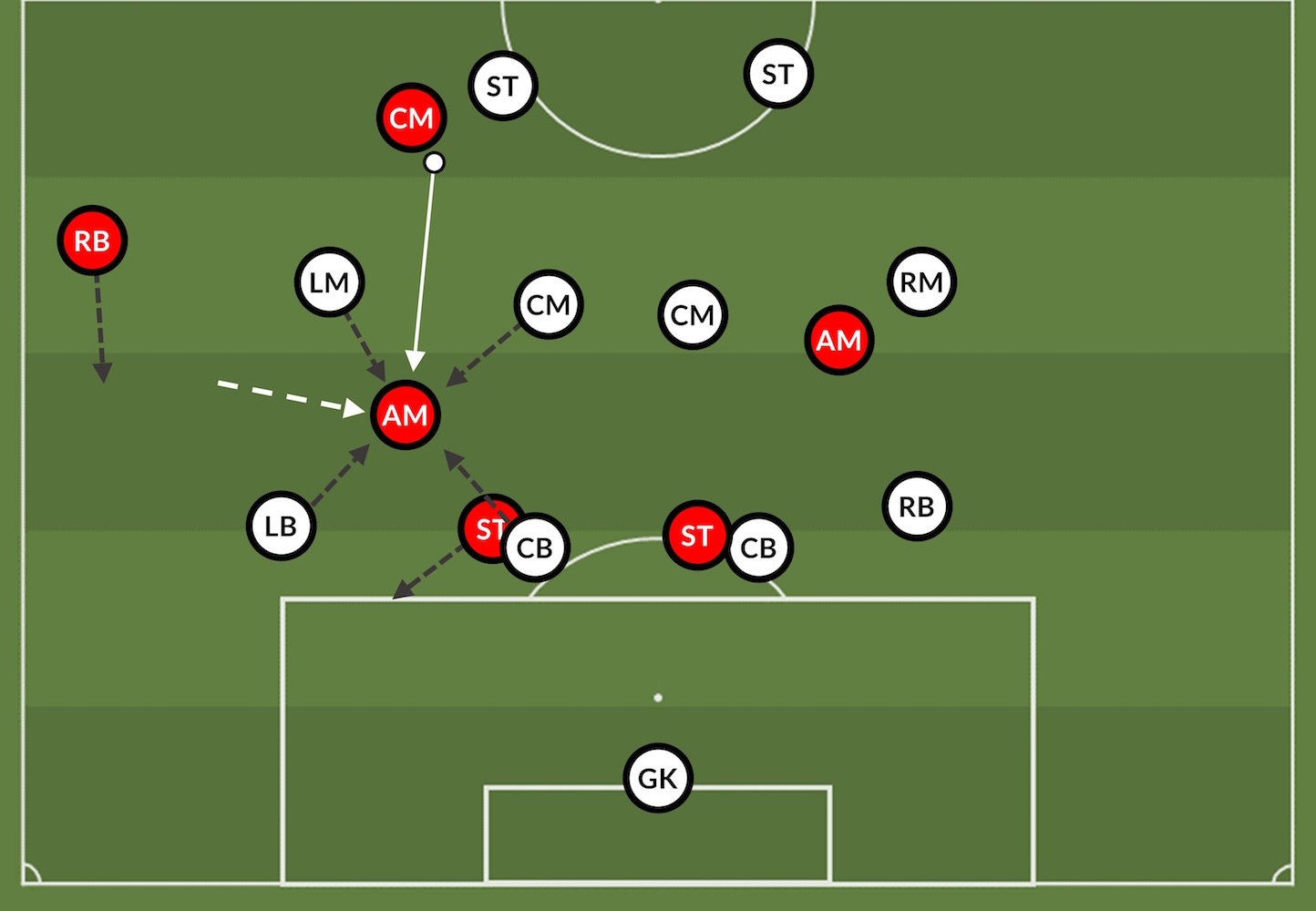 Both teams like to exploit this, especially with Alexander Baumjohann for Sydney and Ulises Davila for Wellington, who are adept at finding pockets of space. Once they receive the ball, they quickly turn and drive forwards, either dribbling directly, or looking to play a runner in behind the defence.

Fullbacks on the flanks
With the attacking midfielders vacating the flanks by coming inside, the responsibility of providing width then falls to the fullbacks. Both teams have fullbacks who are very comfortable moving up the pitch. The heat maps below show the fullbacks’ positioning – notice how they almost spend equal amounts of time in the opposition half as well as their own half. 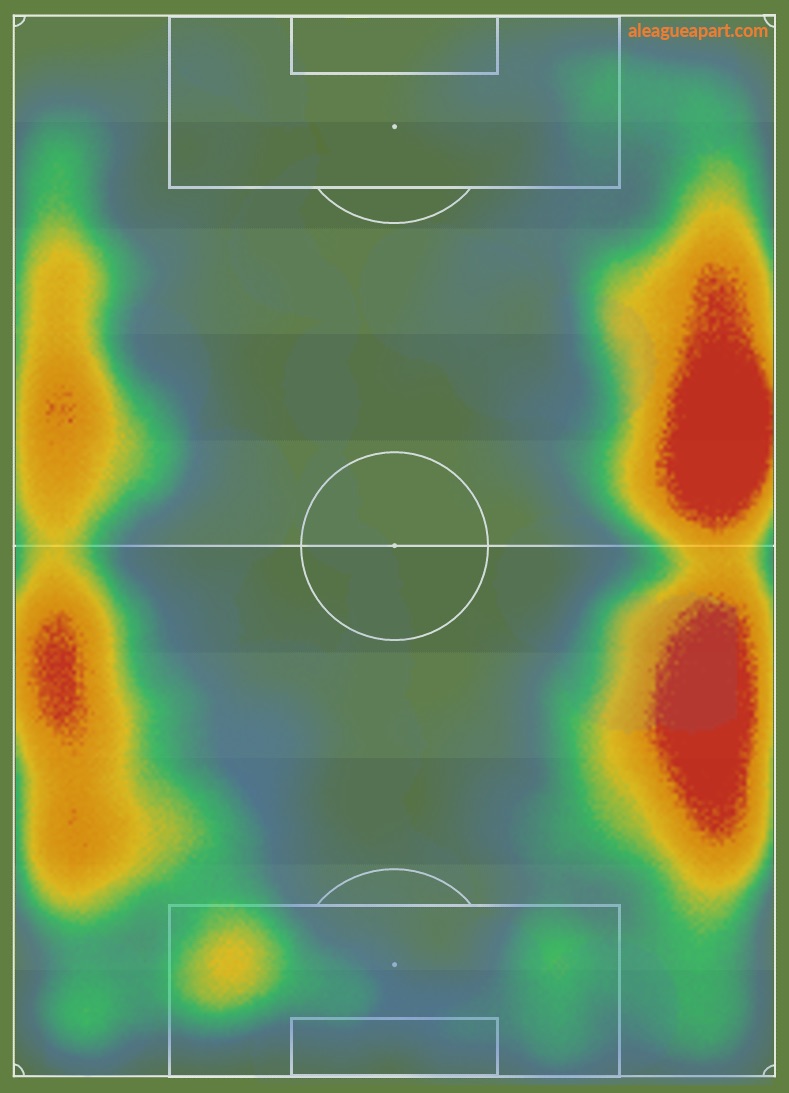 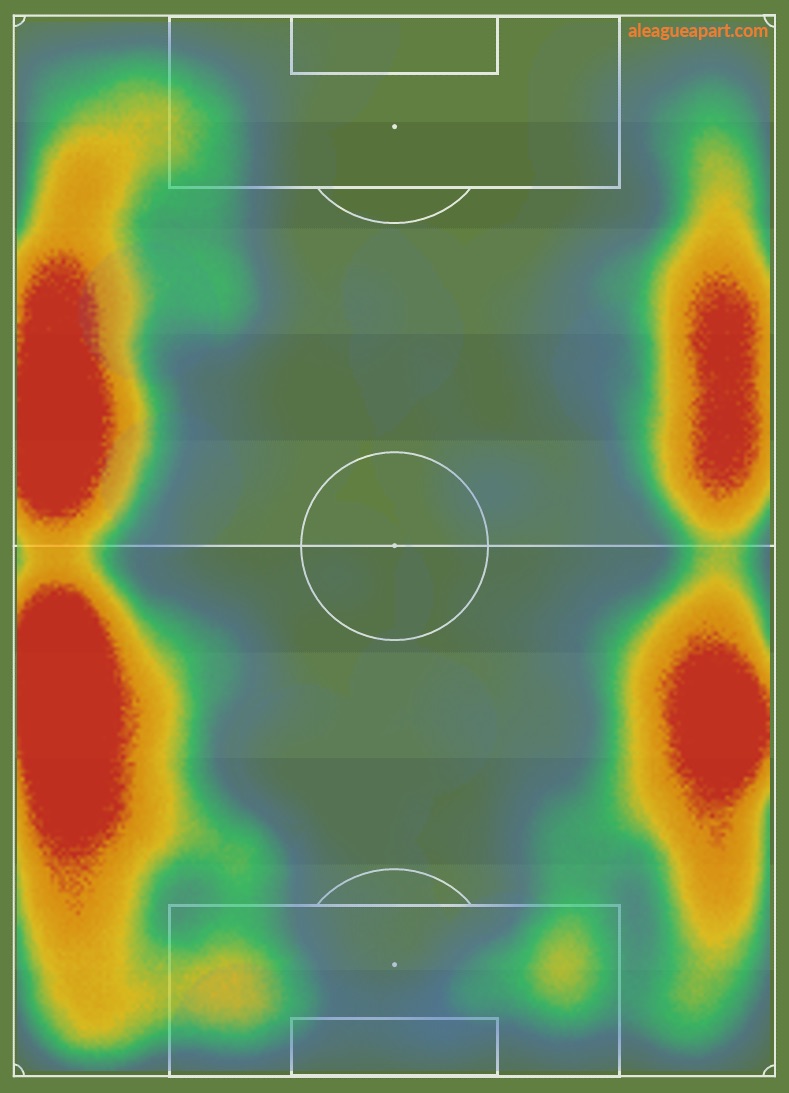 Notably, Sydney’s right-hand side and Wellington’s left-hand side are more populated. The first choices on the other sides, Michael Zullo (Sydney left back) and Louis Fenton (Wellington right back) were previously carrying injuries, and have managed to recover their fitness over the league shutdown period. Their potential reintroduction into their sides could mean a further increase in overlapping attacks from the fullbacks on both sides.

The fullbacks often arrive late on the overlap into areas of space. This opens three questions with regards to how wide spaces will be defended.

1. Are the attacking midfielders up to the defensive task of tracking back? Will they have the discipline and fitness to continually cover the overlapping run?

2. Will the fullback be responsible for defending the wide spaces? If the fullback is tasked with meeting the player out wide, a channel can open in between the fullback and the centre back, which can be exploited by a run from deep. The central midfielders/wide midfielders must be aware of late runs. 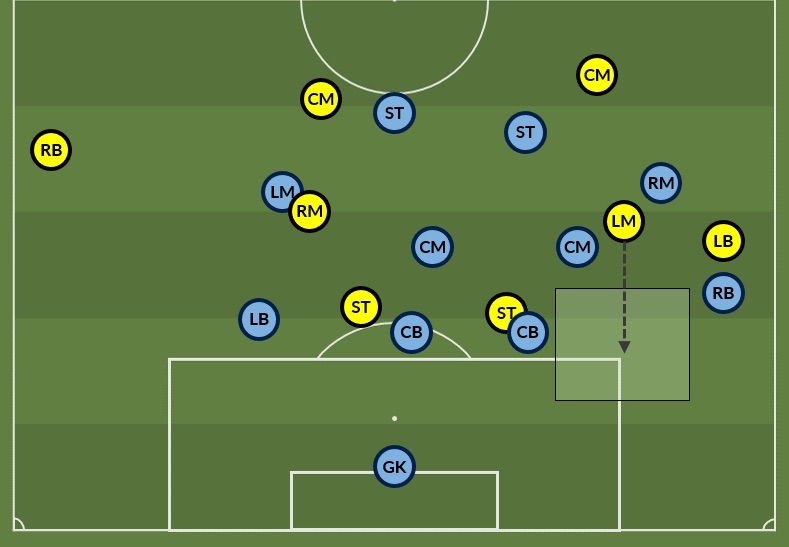 3. If the attacking midfielders slots in on the outside of their fullback, can the opposition take advantage of space in a deeper area?

An example of this came up in one of their previous ties. Baumjohann (RM) received the ball inside following a pass from Brattan. Upon him turning with the ball, Kosta Barbarouses (ST) started a run into the channel, pinning back the left back Cacace by forcing him to match his run. With Rhyan Grant (RB) coming up on the overlap, the left midfielder Callum McCowatt drops to cover the run, giving Baumjohann space to move into. He’s given a pocket of space, and has the time to measure a great ball into the box.

Counterattacking threat
Both sides are well equipped to counterattack. Sydney have Barbarouses, who is a very pacey direct option, Baumjohann, who is very effective at driving forwards quickly, Ninkovic, who finds himself in good spaces, and Grant, who energetically bombs forward upon winning the ball. Meanwhile, Wellington have a variety of options – David Ball and Sotirio are very quick, while Reno Piscopo and Davila are very good at transitioning the ball quickly in tight spaces, and the fullbacks will get forwards quickly.

With the fullbacks storming up the field, there will be spaces left behind at the back, which both sides can capitalise on. Sydney and Wellington have the most counterattacks per game.

The high positioning of the fullbacks will be a challenge defensively, as none of the centre backs are exceptionally quick on the turn. It will be important for the opposite side fullback to drop back into defence to ensure the defence is balanced – as the left fullback attacks, the right fullback should be more conservatively positioned (and vice versa).

The key will be for the central midfielders to cover their fullbacks defensively, and for them to start the counter-press to prevent players from breaking if possible, or dropping with their runners if space is exposed. I also wouldn’t be surprised to see quite a few tactical fouls thrown in to stop play when players are exposed at the back.

Summary
When two similar attacking systems come up against each other, it’s always an interesting result to see how they tailor their game model to gain an advantage. Neither team is particularly defensive, and with so much attacking quality on display, I’d expect to see a very fluid game, with both teams probing each other and then suddenly flicking the switch to attack when the opportunity arises.

Both teams will look to exploit each others’ fullbacks coming up the pitch through counterattacks, and I also wouldn’t be surprised to see stages of the game that are end-to-end with players looking to transition the ball forward very quickly upon winning possession.