The Atlanta Hawks were a respectable team all throughout the ’90s but had just been swept by the eight-seeded Knicks in the second round.

Changes were clearly needed, starting with trading away the ‘Thief’, otherwise known as Mookie Blaylock, their franchise point guard since 1993. By the way, Mookie Blaylock, that’s the coolest name in NBA history – right behind Taurean Green and Speedy Claxton.

But a more significant trade was the sending away of leading scorer Steve Smith to Portland for Isaiah Rider and Jim Jackson. This is looked at as the last straw that broke the camel’s back.

Except everyone knew at the time that Rider was more like an anchor, dragging teams down with instance after instance of outright stupid behaviour. The logic was that the behavioural problems would be cancelled out by the benefits of dumping Smith’s fat contract, his ageing knees, and that they would now have younger, faster players that would go with a more high-speed offence.

Only problem was, all those things never swayed Rider to come with a change of attitude. 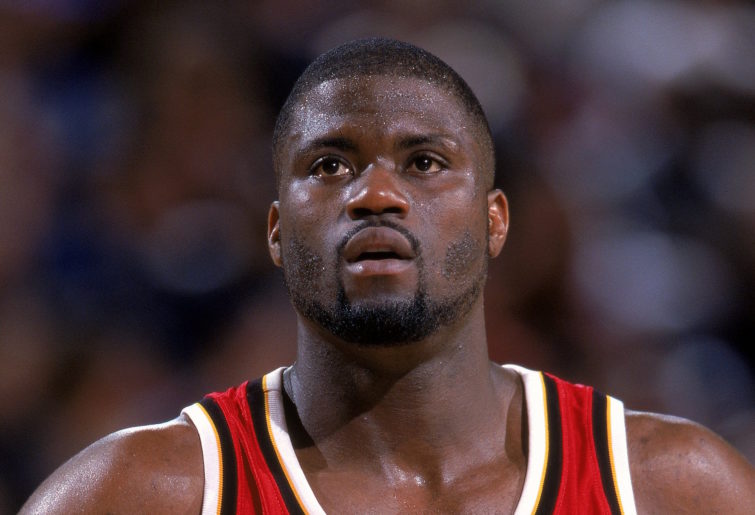 From the very first day, he failed to show up to training camp, and the Hawks knew what they had got themselves into.

So Rider’s story with the Hawks went as follows. He missed more practices and skipped more than a few team flights. Two suspensions, and the threat of another if he continued to show up late and that was it.

He was waived with 18 games left in what should have been the prime of his career. Imagine someone averaging 19 a game, leading a team in scoring and then getting waived. They must have really not liked him.

But who they did like was their seven-foot-two centre, Dikembe Mutombo. The big man put up 11.5 points, a career-high 14.1 boards and 3.3 blocks a game. They also liked Jim Jackson, a stocky guard that was productive everywhere he went. And Alan Henderson, their third leading scorer who grabbed seven rebounds a game.

These players missed a combined two games all season. But when Alan Henderson is your third best player, the team can’t be too memorable. In fact, this season sucked.

They finished 28-52, their worst record since the Hawks moved to Atlanta in 1968. It was such a dumpster fire it sent Lenny Wilkins into a resignation. That’s right, the coach with the most wins ever couldn’t fix this season.

But no one blamed Wilkins for how this season played out. Other than waiting too long to bench journeyman point guard Bimbo Coles and put rookie Jason Terry into the line-up, Wilkins’ hands were clean.

What Hawks fans didn’t realise was that they had not even hit rock bottom.