For us to use it in sport isn’t really the done thing, but some of us do. I know I have.

However, if there is a team all others in the A-League really hate, it is Sydney FC.

For Newcastle’s faithful fans, Sydney FC are the big city. Who else would call themselves ‘Bling FC’ in the early days of the A-League?

That inaugural season brought the bling in the form of former Premier League striker Dwight Yorke. For the Round 3 fixture against the Newcastle Jets, he hadn’t long left the airport after playing a World Cup qualifier for Trinidad and Tobago.

Early first-half goals from Ante Milicic and Richard Johnson had things looking comfortable for the Newcastle Jets. A desperate situation called for the early second-half introduction of Dwight Yorke. He obliged with a goal. Even at 36 years old, he was a quality performer.

The Jets may have won the game but Yorke was streets ahead of everyone on the field, meaning he didn’t gel into the team as expected. When he did, Sydney went on to win the grand final.

On Australia Day next season, the travelling Novocastrians headed to the venue for the semi-final fixture. The ground was the Sydney Football Stadium. Two early goals from a young Alex Brosque and a bullet header from Mark Milligan soon put Sydney in a commanding position.

Newcastle started the second half with fervour, and, early in the half, a jet roared over the venue. Somebody in the crowd shouted, “It’s a sign!”. Perhaps it was, as shortly afterwards Colombian Milton Rodriguez kicked a valuable goal. Sydney hung on for a 2-1 victory.

Nevertheless, the general feeling from the Newcastle fans was we could defeat Sydney at home by two clear goals. Rodriguez’s goal had provided the impetus, and there was a foreboding that a large, raucous home crowd would be able to cheer the Jets to a successful outcome. Strangely enough, there were only 21,122 fans at Sydney’s home ground.

The next leg of the semi-final was played in Newcastle’s McDonald’s Jones Stadium. A large crowd of 24,338 saw some expected attendees miss out on seats, as this was before the west stand was rebuilt. Talisman Joel Griffiths and Kiwi Vaughan Coveny both scored, and Sydney FC were thoroughly outplayed. This meant they were dispatched from the finals series. Their manager Terry Butcher even had the indignity of being booed by some of his own fans.

In the 2012-13 season, Sydney splashed the cash to bring in Alessandro Del Piero. Newcastle secured the services of Emile Heskey. Again, the venue for a meeting of Sydney FC and the “small nothing team” (a quote overheard from a conversation by a Sydney fan and his mate) was the Sydney Football Stadium.

Ryan Griffiths opened his account for the season but Del Piero equalised with a trademark free kick. Newcastle import Heskey scored just before halftime with Craig Goodwin rifling a goal home to make it 3-1. Blake Powell scored in the 75th minute and Sydney pushed hard for an equaliser. Most of the 35,500 in attendance may have been disappointed that October evening. But not the followers of the “small nothing team” from the Hunter. No doubt, it was a memorable day for Newcastle.

In the interim, some very lean years for the Jets were endured. Four full seasons passed by without a win against Sydney FC.

March 3, 2018 is a day that will forever be remembered by anyone that was inside Newcastle’s home ground. The scene was set from the 14th minute when Roy O’Donovan was sent off by referee Chris Beath. His crime was to have brushed past Sydney’s Dutch defender Jordy Buijs. Buijs’ ensuing theatrics were worthy of a Golden Calf award (the Netherlands’ equivalent of the Oscars).

In fact, he was plain embarrassing. From then on, every one of his touches was booed. The whole event had fired up every Newcastle fan in the stadium and much of the 18,156 strong crowd were furious.

They got behind the ten remaining players with home crowd delirium that hadn’t seen or heard for a long time. Dimi Petratos scored and put Newcastle ahead just before halftime, but Bobô evened things up early for the visitors early in the second half.

There had been rumours in the lead up to the clash that Andrew Nabbout was about to exit Newcastle. It was fitting that he put in a memorable performance, capped off by a fantastic winning goal. The Jets’ courageous captain Nigel Boogaard limped from the field with what turned out to be a fractured leg. 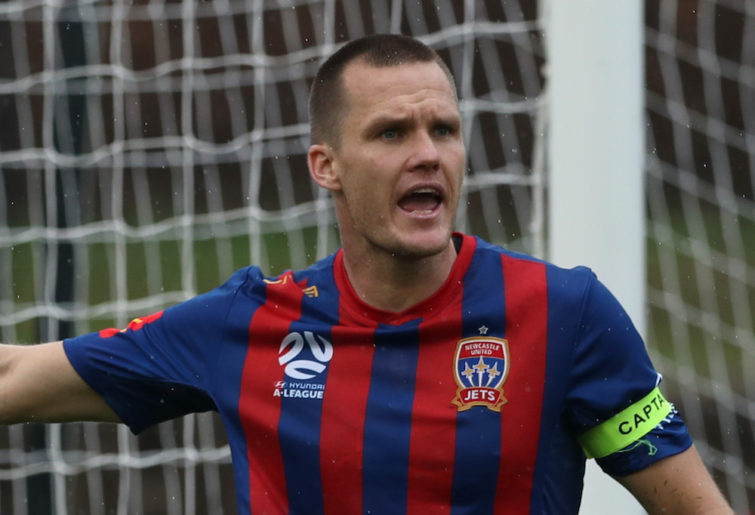 Sydney’s Alex Wilkinson even suggested after the game that some Sydney players may have been affected by the crowd. Oh yes, we were happy to oblige. This game had everything.

With the A-League season restarting, it’s going to be nice to play our big city neighbours.