It had everything – a cagey first half tactical battle, an end-to-end phase, penalties, refereeing controversy, and a super-sub match winner. 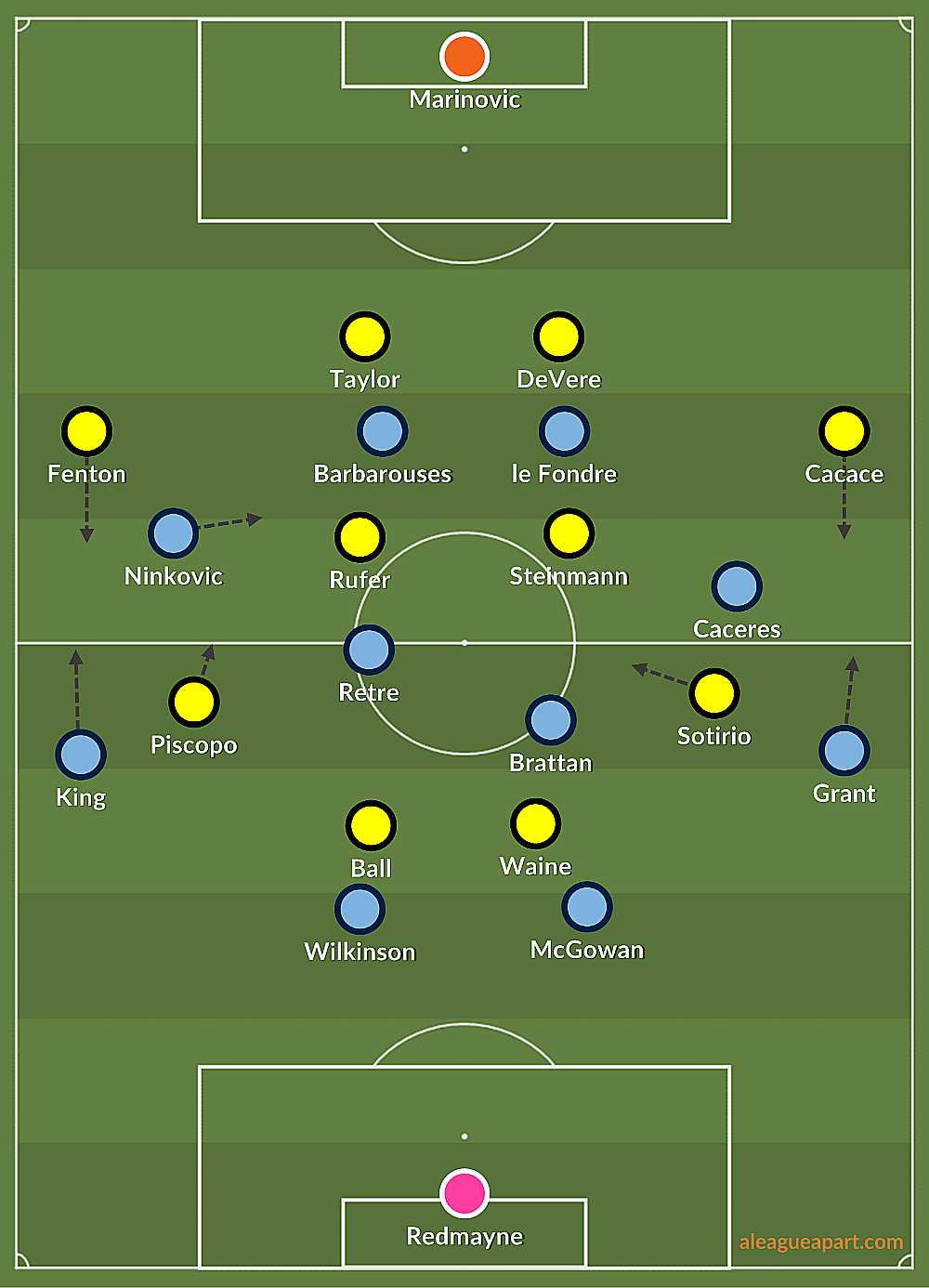 Sydney lined up in their usual 4-4-2 formation, with the main selection decisions from Steve Corica being Joel King, who kept his spot at leftback ahead of Michael Zullo, while Anthony Caceres took the right midfield spot ahead of Alexander Baumjohann.

Ufuk Talay also stuck to his usual setup, a 4-4-2 / 4-2-3-1 and had to make more decisions with his starting lineup, with Ulises Davila and Gary Hooper deemed only for enough for the bench, having only left hotel quarantine two weeks ago.

In their places were Jaushua Sotirio who played from the left, and Ben Waine, who made a rare start up front. In midfield, Alex Rider replaced the suspended Cameron Devlin, while Louis Fenton came back to rightback following his previous injury.

Cagey first half
While they had similar starting formations, they had different plans for buildup as well as in defence. 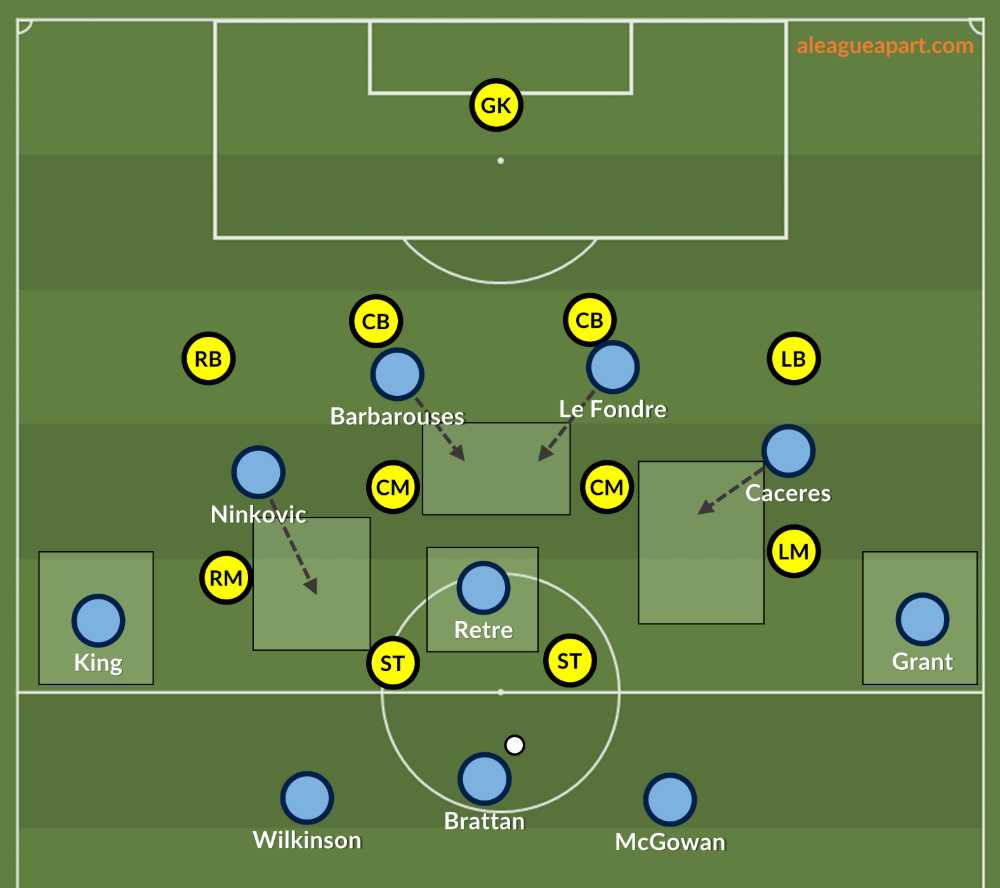 Sydney’s build up looked to find space in between the lines, or outside Wellington’s defensive shape

Wellington set up in a narrow 4-4-2 shape while in defence. They looked to make it difficult for Sydney’s attacking midfielders and strikers to receive the ball centrally by compacting the space available, and blocking passing lanes.

At the front, the forwards started by staying central and fairly passive, only coming out to press Wilkinson (a common pressing strategy adopted by teams playing against Sydney, forcing the pass into the leftback Joel King, and then closing options). Meanwhile, the central midfielders stayed quite compact in the centre.

Sydney looked to play through this Wellington structure, with Brattan dropping into the defensive line. Brattan’s role was to help keep and circulate possession, always looking for opportunities to play passes through the Wellington lines.

Spaces were created quite methodically, with Retre positioning himself centrally in the blind spot behind the Wellington strikers. The central midfielders would come out to close Retre to stop him from turning with the ball, but often he would be able to receive the ball and turn to face forwards.

When he was able to do so, the pressing central midfielder would retreat back to keep the midfield’s defensive shape. Sydney was able to play with this – Retre forcing one of the midfielders out of position, and then Caceres/Ninkovic popping into the space vacated to receive. 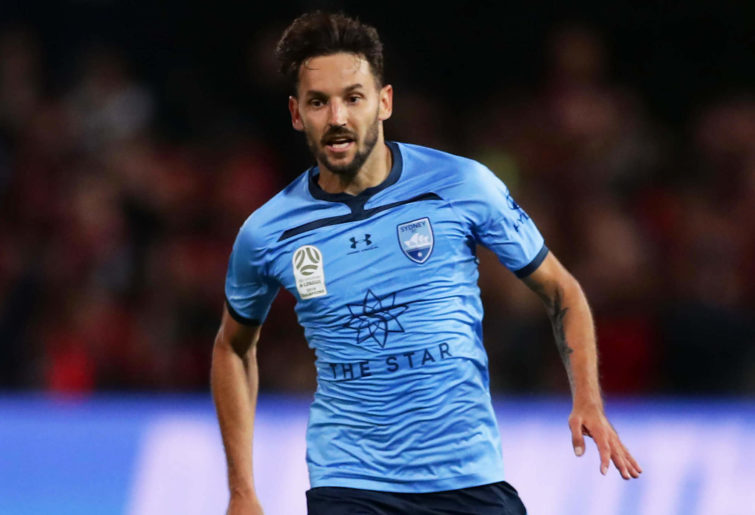 As the half progressed, Ninkovic would come slightly deeper to pick up the ball, drawing attention to himself, and trying to create more space for his midfield teammates. While both Ninkovic and Caceres would drop into the midfield, the Wellington fullbacks (their direct opponents) wouldn’t come with them, and instead stayed in position in the defensive line, meaning that space on the flanks was hard to come by.

They were ready to deal with bursts from the Sydney fullbacks on the overlap, and neither King nor Grant had too much joy on the attack. King had a bit more space on the left, but his crosses were easily dealt with by the Wellington centrebacks.

Once they received the ball in the final third, they focused down the centre, aiming to combine with one-twos and quick movement. Le Fondre and Barbarouses combined well as usual to make a few promising opportunities, with Caceres and Ninkovic joining in as well with runs from deep.

Ninkovic in particular would come inside from the left-hand side to make late runs in behind, partly to find space for himself, and partly to disrupt the defensive structure for his teammates to take advantage.

To keep the centre packed, the central midfielders would shift over, with the far side wide midfielder shifting over to the middle, creating a 4-3-3 defensive shape. If the ball circulated to the other side, the corresponding movements would be made. 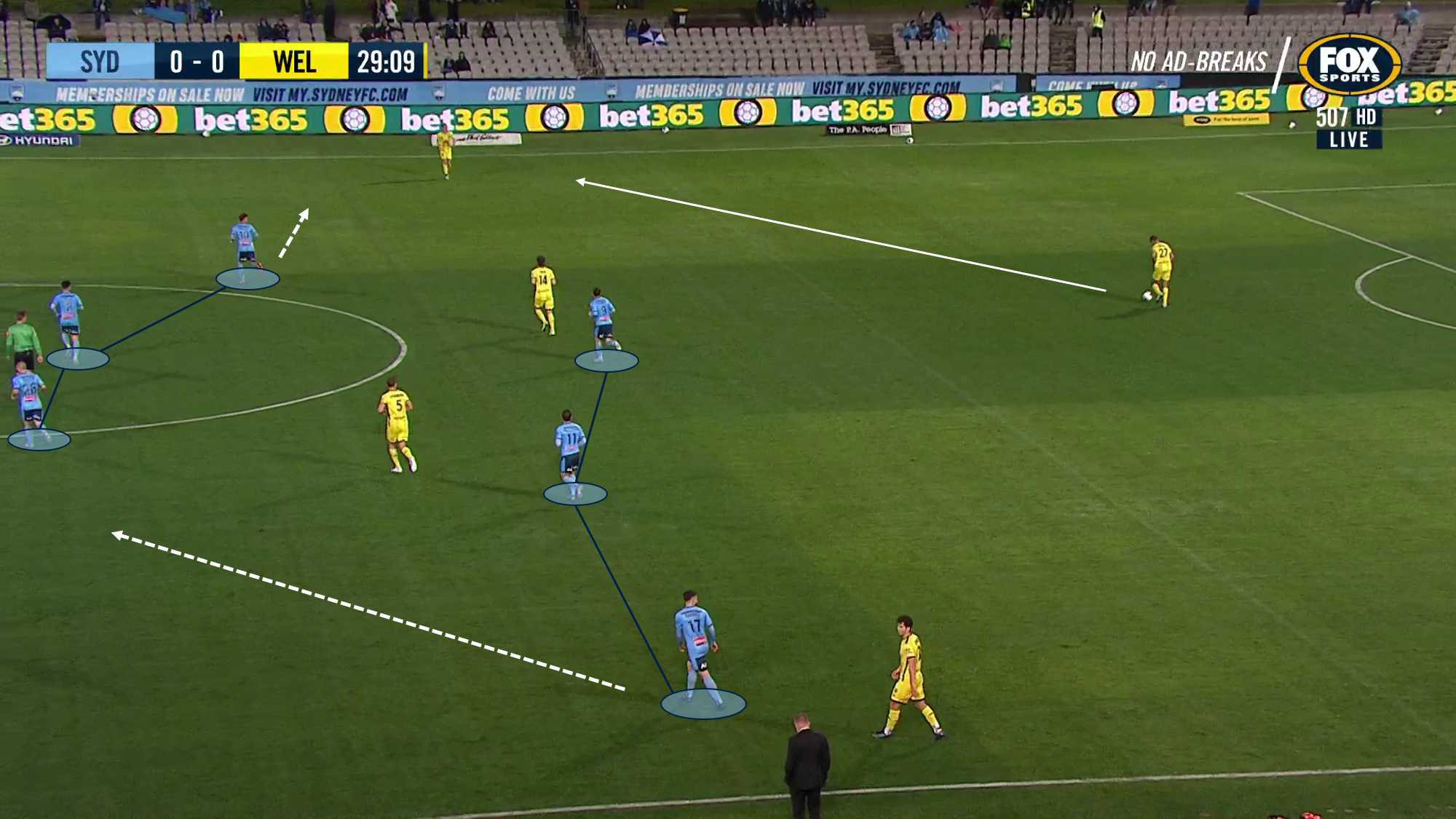 The ball starts on the right-hand side, and Caceres (#17) has joined the front three. As the ball is shifted over to the opposite side, the players shift accordingly… 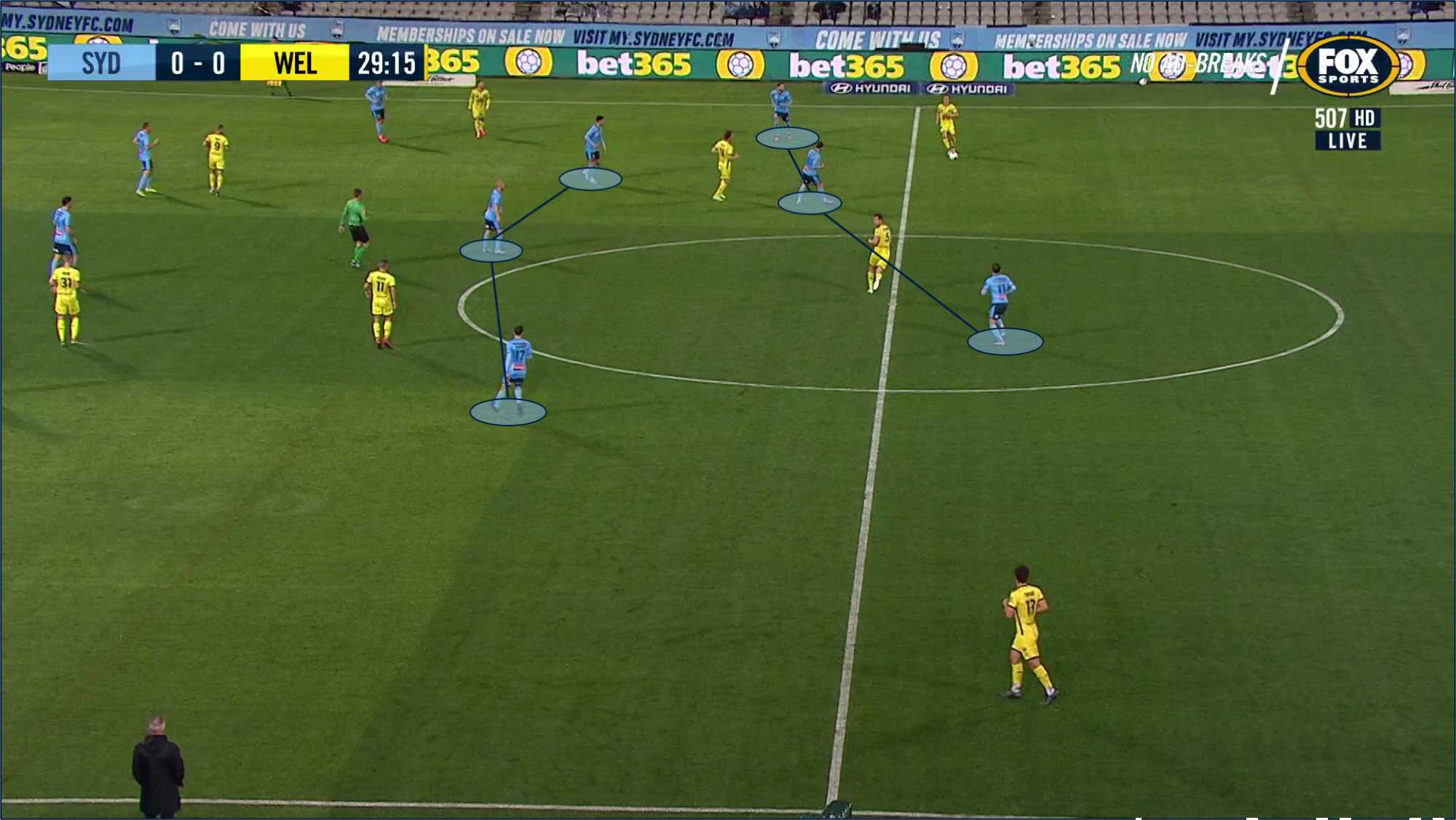 With Caceres joining the midfield line and Ninkovic (far side) pushing up to join the forward line.

Wellington generally like to play in between the lines centrally, with their players taking up positions in the spaces between the lines. All the attacking players took turns in finding space in between lines, with Piscopo and Sotirio drifting inside from wide positions, and Ball and Waine dropping deep.

Sydney responded to this by aggressively coming out to close down players when they looked to receive balls into their zones. The strikers struggled to get on the ball with the Sydney centrebacks stepping up well to stop them. Sotirio also struggled when coming inside on the left, while Piscopo ended up dropping deeper to receive on the right.

To ensure that gaps between the midfield and defence were not large, the Sydney defence would step up also, forming a medium-high line. This opened up space behind the defence for runs to be made, but unfortunately, Wellington could not take advantage, with neither Ball or Waine able to stretch the defence in behind. This is where Cameron Devlin was missed – his long passing range might have been able to unlock the defence here.

It should be noted here that Rufer and Steinmann did a good job – they helped circulate possession well, and played progressive passes through the lines. Usually Devlin takes the plaudits, but they are both quite effective at breaking lines – especially Steinmann.

When Wellington were able to pick up the ball centrally, it was followed with a ball out wide, often a long diagonal into the fullbacks. Both fullbacks attacked adventurously, getting high up the pitch on the overlap, and entering the box during crossing opportunities.

The game opens up
While both sides had a bit of joy through their positional attacks, the best opportunities for both sides came from counterattacks, which the second half provided more of. The game increased in intensity in the second half, with the first 15 minutes being an end-to-end affair.

One team would win a corner, the other would win the ball back and counter, followed by the first team winning the ball back and countering in turn. Both teams would look to start attacks before the defence could form their organised defensive lines, and as a result, there was plenty of space for players to receive passes, turn and dribble forward.

Wellington made a substitution to start the half – Waine withdrawn for McCowatt, with Sotirio switching from left midfield to play as a striker. McCowatt is a more traditional winger who stays wide, compared with Sotirio who preferred to come inside.

In the first half this meant that Cacace was frequently the only one occupying the left flank, but the first minute of the second half saw McCowatt combining well with Cacace to overload Grant 2v1 at rightback.

Cacace won the penalty from this flank. When McCowatt stayed out wide and Cacace coming forward on the overlap, this meant that both Grant and Caceres had to come out wide to meet them. I covered this in my preview of this match – with Grant coming out wide, a channel would open up in the defensive line between the fullback and centreback.

Cacace knocked the ball past Grant to attack this vacant space, and with Brattan not able to slot in to cover in time, McGowan had to come out – ultimately reaching the ball late and taking out Cacace in the process.

Substitutions
With around 25 minutes left, both teams made substitutions to change the game. Wellington moved first – Gary Hooper and Ulises Davila on for Sotirio and Piscopo. Hooper played up front, with Davila taking a free role behind with license to drift forward and sideways.

Ball shifted over to Piscopo’s position on the right. Hooper, McCowatt and Ball occupied the defensive line, which meant that Davila could drop into pockets of space behind the Sydney midfielders unchallenged.

He managed to receive the ball in promising positions, but seemed a bit rusty with his touch and passes – he only made two mistakes, but those two mistakes would ultimately cost Wellington the game (handball for the penalty, a slack pass that was cut out by Ninkovic who set up Buhagiar for his first goal).

Sydney followed suit – Alexander Baumjohann on for Caceres on the right, Michael Zullo on for King at leftback, and Trent Buhagiar on for Barbarouses. Baumjohann injected a much needed attacking intent on the right, combining well with Grant, who came forward more on the attack. The penalty arose from a corner than was won from a cross from the right hand side, engineered by Baumjohann.

With the game drawn, Wellington set out to try and win it. The nature of Wellington’s attack is that they pour players forward – particularly the fullbacks, leaving the two centrebacks alone at the back. This set up a perfect situation for Buhagiar, whose game revolves around his ability to outpace defences with runs in behind, against two centrebacks who are not particularly pacey.

For the first, a slack pass from Davila exposed Wellington severely, and Ninkovic sent Buhagiar on a run with an excellent through ball. Marinovic unnecessarily came out to sweep up the ball, with Steven Taylor positioned well to recover and challenge Buhagiar. Buhagiar beats the keeper with some quick footwork, and is a bit lucky, managing to squeeze it through Taylor’s legs to slot it in the centre of the goal.

For the second, the through ball from Le Fondre finds him one-on-one with the keeper. His first attempt is quite poor, and he luckily gets a second bite at the cherry which he converts with a perfectly placed chip.

His performance today showed why he’s a very handy weapon for Sydney as a substitute. Hopefully he can take confidence from this showing and continue his development, including a bit more composure in front of goal.

To say the 2021-22 season has been torrid for Sydney FC is an understatement, culminating in the club’s failure to make the finals series…

Corica up for Sydney rebuild challenge

Corica up for Sydney rebuild challenge 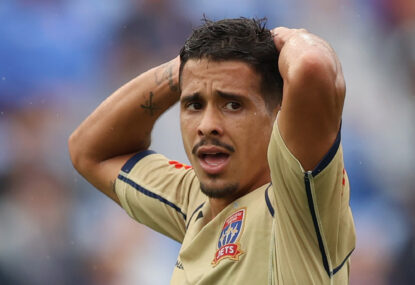