How difficult and demanding life must appear sometimes.

Of the over 12,800 footballers who have played the national game of AFL football at the highest level, only one player has ever played more games than your dad, a legend of the game.

You show enough ability as a youngster playing for Drouin to make the Dandenong Stingray’s TAC Cup squad, and get selected at pick 24 by Hawthorn, the club at which your father established his legend.

After two disappointing years at the Hawks, where osteitis pubis and a heart murmur played a part, you are delisted.

You go and play suburban football at Carrum Downs for a year before trying your luck in the SANFL with West Adelaide.

After one year at the club, you are selected with draft pick no 73 by Richmond and start your career with them in 2004.

However, now you start a run of four seasons without missing a game and in this time show your skill in the midfield, winning 31 disposal against Brisbane in Round 9, 2005, also winning the Tigers best clubman award and running third in Richmond’s Best and Fairest in 2007.

In the following year you run second in the Best and Fairest and in the next two years finished in the Top 10. You also ran fourth in the 2012 Best and Fairest and had your best year for Brownlow votes, earning three votes for best on the ground against Greater Western Sydney, two votes against Adelaide, Carlton and Essendon and one vote against Melbourne for a season total of ten votes.

Over your career you earned 35 Brownlow votes and played 173 games, kicking 74 goals. You retired at the end of 2013, having played only one post-season match – your last game in a losing elimination final against Carlton.

Your record at the Tigers was strong enough for you still to be in the Top 50 (at number 48) in Richmond’s Top 100 game players and equal 99th on the goal kickers list, joined this week by Tom Lynch on that number.

Tuck will be remembered as a hard nosed, brave and consistent midfielder loves by all. He was also a family man, who with wife Kate raised two children Will and Ava.

Shane deserved all the recognition that he received as a footballer, and much more.

The Gold Coast Suns have moved early in the 2020 AFL trade period to acquire electrifying speedster Oleg Markov, who fills a missing puzzle piece in the squad. 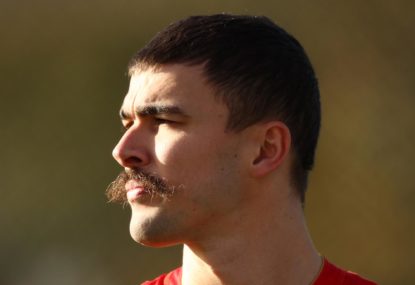 With their grand final victory over the Geelong Cats last week, Richmond became the fourth team this millennium to win at least three flags.

In sport, there’s a sense of inevitability that separates the greats from mere mortals. A clear demarcation. Not just of skill, but of mindset.

Richmond has done what was seen as impossible by any right-minded person only four years ago and claimed their third premiership in that time. The dynasty is now sealed, but perhaps not complete.