Fortune doesn't always favour the brave: Why the Windies lost at the coin toss

Cast your minds back to the overcast skies that greeted both sides on the morning of Wednesday 16th, the commencement date of the second Test between England and the West Indies.

The forecast suggested favourable conditions for fast bowlers, gifting them the opportunity to use the high humidity in the air to maximise the amount of swing on offer.

The tourists’ captain, Jason Holder, won the toss and gambled with the decision to bowl.

A decision that failed to pay off!

Despite two Roston Chase wickets in the first session, the host nation recorded twin tons in the form of patient opener Dom Sibley, reaching 120, and Ben Stokes posting a sublime 176 off an uncharacteristic 356 balls.

The partnership buried the Windies’ hopes and Holder’s judgement was to blame.

With a 1-0 lead heading into the match at Old Trafford and a stranglehold on the series, they managed to open the door slightly ajar for England. The Poms posted a commanding 469-run first-innings total and the visitors were on the back foot to save the Test.

It seemed time was the only thing in their favour, with rain interrupting days three and four meaning a draw was on the cards if England were to waste the opportunity Holder bestowed upon them at the coin toss.

They battled valiantly, avoiding the follow-on to ensure the home side had to bat again, however with ten wickets needed on the fifth day’s play, the mountain was too high to climb for the West Indies.

The inclusion of Stuart Broad benefited the hosts, drawing on all his experience and accumulating figures of 3-42, dismantling a vulnerable top order and contributing to his side’s efforts of levelling the series.

The Windies struggled to counter the relentless pressure applied by Broad, while Stokes inflicted more damage, this time with ball in hand, to place his name in the conversation for best all-rounder in the world.

Circling back to Holder’s decision, had he elected to bat, this Test would’ve unfolded differently, perhaps resulting in a victory for his side.

With the third Test around the corner, here’s hoping Holder doesn’t make the same mistake twice if presented with this opportunity.

'What is THAT!' Everyone loses it as Bairstow pulls off all-time outrageous shot

"We've had the 'Natmeg', is that the 'Ginger Nut'?" Jonny Bairstow channelled England women's star Nat Sciver with an incredible through-the-legs shot. 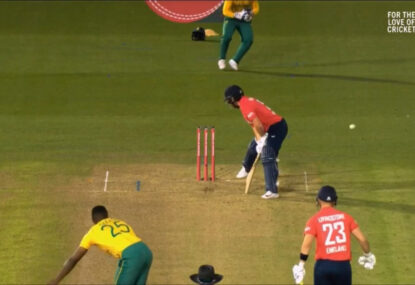 'What is THAT!' Everyone loses it as Bairstow pulls off all-time outrageous shot