Are you ready for one hell of a footy blitz?

Round 8 begins tonight, but we’ll barely have a chance to catch our breath before a whirlwind few weeks that’ll see Rounds 9, 10, 11 and 12 put in the blender and splattered across every day of the week.

I hope my partner didn’t have any plans on using the TV between now and mid-August.

If you’re wondering how this column will work during this period, we’ve got an explainer at the bottom.

It was a much better week for (almost all of) The Roar’s AFL expert tipping panel last week, with myself, Liam Salter and The Crowd all putting up six points. Unfortunately for last year’s winner, Marnie Cohen, none of the upsets she picked fell her way and she only managed three.

It’s the first ever prime-time game for the Gold Coast Suns to kick things off and they’ve certainly earned it. I’m not sure if they’re good enough to stay in the eight this season, but they’re an exciting young team to watch and I’m glad to see the AFL reward them.

I’m convinced the Bulldogs – who crushed the Bombers last week – are the real Bulldogs, however. They have a surprisingly iffy record at Metricon Stadium – two wins from five visits – but should continue their strong form post-resumption with an entertaining win here.

Friday night is probably the least anticipated grand final rematch since Port Adelaide and Geelong’s reunion in 2008. As I said on Tuesday, the Giants are worse than wobbly right now and could find themselves too far off the pace in a hurry. Richmond haven’t been that impressive either, but took North Melbourne to the cleaners last week to make it three straight wins.

They may have lost their last three matches at Giants Stadium, but two of those were by less than a kick. I’ll back them to continue their winning run and put the heat on GWS.

Speaking of North, they’re in all sorts of trouble. They looked downright atrocious against the Tigers last week and their mismanagement of injured players has been spectacular. Carlton lost no admirers in their defeat last week and could make another statement here by swatting the Kangaroos aside.

Hawthorn have been woeful over the last three weeks, but they should still have the talent to knock off the floundering Swans.

It’d be easy to call St Kilda pretenders after their laborious win over the Crows on Monday, but I think it was the typical ‘good team wins ugly’ affair. They never looked that rattled, withstood Adelaide’s surge and once they found an opening, piled on the goals to skip away. This could be an absolute pearler in disguise, but I’ll back the Power to win it narrowly.

St Kilda should give Port a run. (Photo by Michael Willson/AFL Photos via Getty Images)

I might not rate Essendon that highly, but the chance of them slipping up against Adelaide is low. They came back to earth last week and have the perfect opponents to get them back off the ground.

West Coast may have three consecutive wins to their name, but they’ve been against Sydney, Adelaide and Fremantle – three of the current bottom four. The Eagles aren’t as bad as the side that stunk up Queensland, but I need to see more before I give them the tip against Collingwood.

A week after labelling Melbourne frauds, it looks like the wheel might finally be turning. I’m not tipping them against Brisbane, but I’d keep an eye on the Demons over the next month – they could surprise.

Fremantle are a tantalising tip against a Joel Selwood and Gary Ablett-less Geelong, but the visitors should regain Mitch Duncan and Tom Stewart, while Nat Fyfe won’t return for the Dockers. Cats in very unconvincing fashion.

I’ll finish with the Shoe-In of the Week and boy, it’s tough this week. There are absolutely no certainties. I’m going to do one thing nobody predicted at the start of 2020 and make this week’s pick the Blues. Sorry, Macca.

My (tipping) season is going as well as that of my beloved North Melbourne. Absolutely terrible, but you feel too bad throwing in the towel, which is why I am still showing up week after week.

Let’s start with North. I’m not tipping them because honestly, how could you on their current form? However, a North win on the weekend wouldn’t surprise me because it feels like any week now they are going to have some sort of breakthrough.

Carlton are looking good though. There are encouraging signs for the future. It doesn’t all have to happen this year, but they are absolutely on the right track.

So too are the Suns, who are going from strength to strength each week. While the Dogs had an impressive win on the weekend, they just confuse me as they are so inconsistent. I will back the Sunnies here – big statement if they can come away with a victory.

Port Adelaide and Brisbane are emerging as two genuine premiership contenders and I think they’ll both strengthen their cases with wins on the weekend.

As should West Coast. Yes, Collingwood are hanging around in the top four and there’s no doubt they are in this game, but now West Coast are back home it’s hard to see them leaving Western Australia much (if at all), which would almost certainly kick-start their drive towards finals. They are also in reasonable form now, having won their last three games by five goals or more.

The grand final replay should be interesting viewing. I am so impressed by Richmond’s depth and ability to make rookies into really good players overnight. Having said that, I think the Giants will take the four points.

They’ll be at home at Giants Stadium and know this is a must-win to keep in touch with the top eight. They should be able to bounce back here after two straight losses.

Essendon should also be able to bounce back against a sad-looking Adelaide, as should Hawthorn and Geelong (but not without a mighty fight from Freo).

A respectable six for me last week, with a couple of upsets letting me down. This week, none of the nine games have any obvious picks.

Tonight’s game between Gold Coast and the Bulldogs looks like a superb clash in the making. The Bulldogs, so bad a fortnight ago but so good on the weekend, are the tipsters’ favourites. They’re more experienced and their best is arguably better, but the Suns have a strong upset feel here. I’m going to tip the Dogs but have a strong feeling I’ll regret this tip later.

The Giants and Tigers are our Friday night teams. This match isn’t a very appealing one, particularly given the home team are out of form. Richmond are slowly finding their best form, so they get my tip here, despite this match being played at Giants Stadium.

Carlton, denied victory so cruelly by Port in the best game thus far of the season, play the thoroughly mediocre Kangaroos on Saturday arvo. The Kangas are desperate to bounce back, making them a dangerous team here, but the Blues are simply three steps above their opposition in terms of form. Danger game, as I said, but the Blues get the tip. 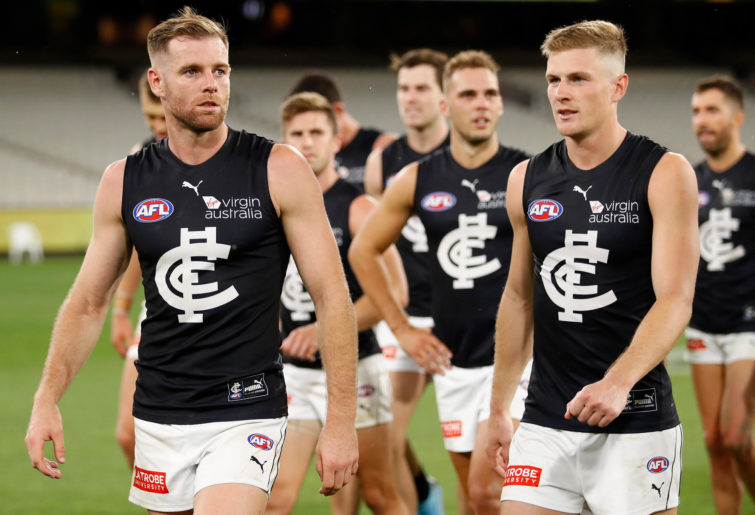 Carlton have an opportunity to bounce back against North. (Photo by Dylan Burns/AFL Photos via Getty Images)

Sydney and Hawthorn are next in what is sure to be a poor game (I wish to be wrong). Hawthorn showed nothing last week, Sydney showed something. Sydney get the nod.

Port host St Kilda on the Saturday night. St Kilda, now experienced at winning at the Adelaide Oval, hope to make it two from two against the South Australian sides. The ladder leaders in Port are too good right now to go past, though.

The Crows facing Essendon is a major danger game for the latter side. The Crows quietly looked alright – in comparison to their recent form – last weekend, but I need to tip with sensibility here, so the Dons should win.

Expect the Lions to beat the quietly-coming-good Demons at Metricon Stadium later Sunday too, despite the danger game indications all over this for Brisbane.

The Eagles host Collingwood in Perth on Sunday as well: a great match-up. The Eagles seem in better form but the Pies look dangerous. It’s at home, and while I’d prefer the upset, West Coast will nip this one.

Freo and Geelong finish the round off on Monday night. This is an intriguing clash. Geelong will be hampered by the losses of Gary Ablett and Joel Selwood, while Freo continue to have injury woes and are coming off a demoralising Derby loss. Geelong are the bookies’ favourites, and are the smart tip, but I’ll risk it and tip Fremantle. I have (probably) misguided faith.

Note: With the AFL moving to a Big Bash-style fixture from next week, things will change on the tipping front a little bit. We don’t want to move this column all over the place, so we’ll go by calendar weeks from next week, rather than rounds. The next expert tipping article will come out on Wednesday and cover all of Round 9 and parts of Round 10, before returning to its usual Thursday home after that.