It was good to see their intentions to keep similar playing styles for at least the remainder of the A-League season, keeping the influences of their predecessors Robbie Fowler and Gertjan Verbeek respectively. It was a close contest, dominated in possession by Brisbane Roar, but kept tight by a great performance from Paul Izzo.

A well worked rehearsed goal ended up being the difference for the sides – but more on that later. Both sides seemed less aggressive, although that could be chalked down to regaining fitness and fluency after the pause. 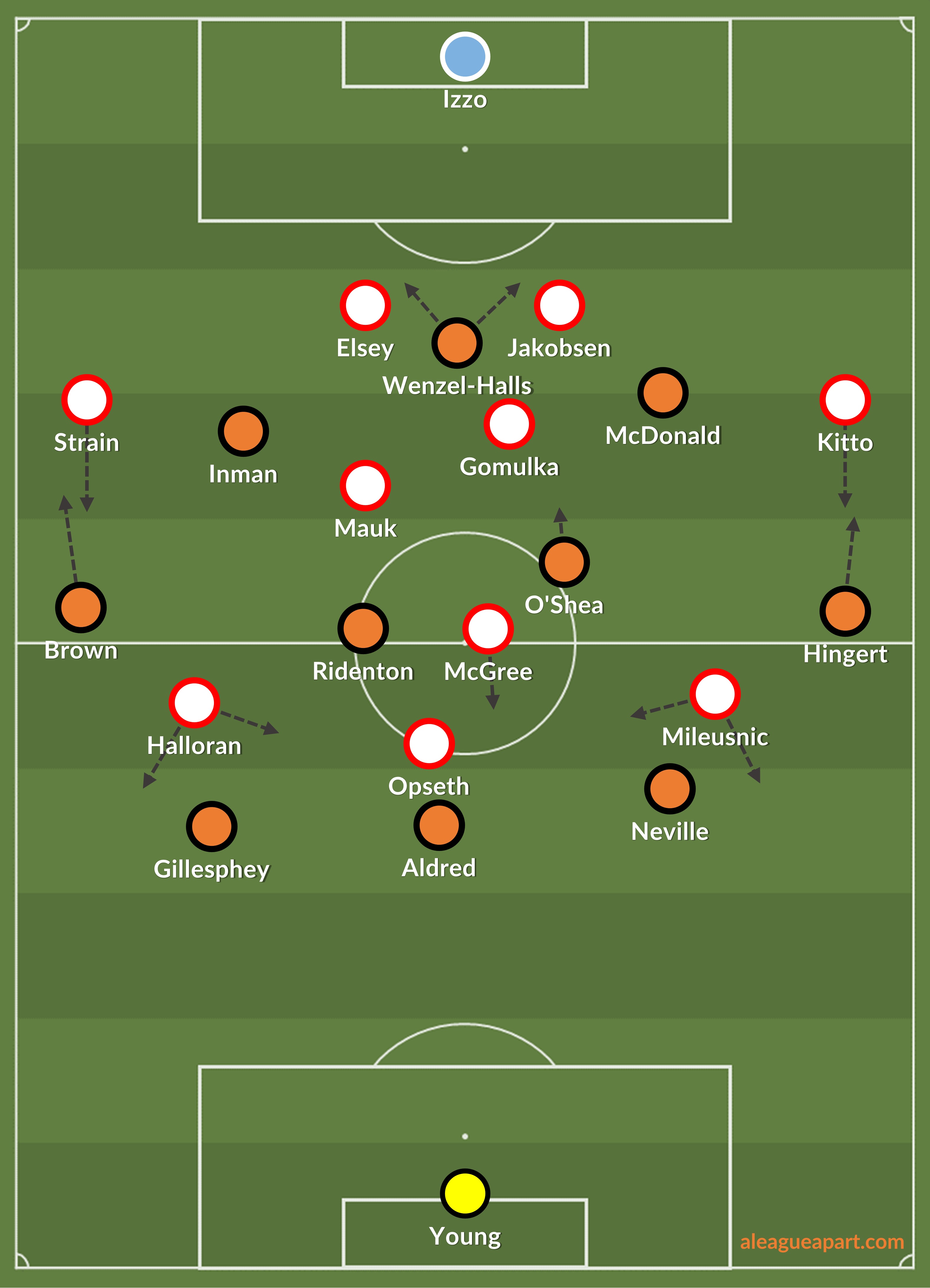 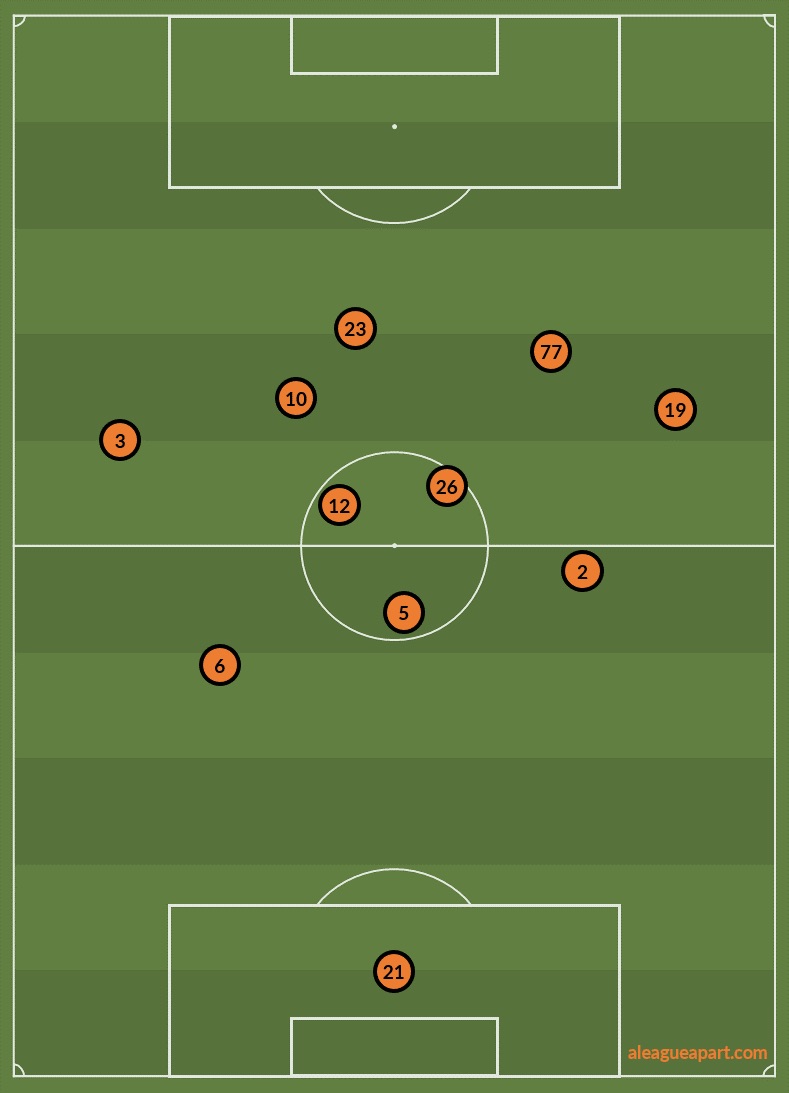 Brisbane Roar played in their standard 5-4-1 slash 5-2-2-1 formation, with Corey Brown and Jack Hingert providing the main width for the side.

Dylan Wenzel-Halls started up front for Brisbane and he showed his strengths throughout the game, providing a focal point for the Brisbane attack, good positioning inside the penalty area, running the channels behind Adelaide’s attacking fullbacks and pressing well while in defence. It’s likely he started to take advantage of Adelaide’s defence, which in previous games proved quite porous and open to direct balls in behind during transitions. He managed six shots for a total of 0.82 xG (expected goals), and was probably a bit unlucky not to score, with Izzo on form.

The second best opportunities Brisbane had was through set pieces, with the Brisbane centre backs getting at least four decent chances (0.53 xG) from set piece situations, and it was a combination of unluckiness and inaccuracy that meant that they couldn’t take advantage of set pieces.

Surprisingly, the two attacking midfielders slash wide forwards Brad Inman and Scott McDonald weren’t able to get into very good shooting opportunities on a regular basis. Adelaide’s set-up ensured that they defended fairly deep and central, crowding out the areas that the two players usually try to find space in. This also made it difficult for the two central midfielders to get involved, and link up play.

It certainly seems that a decent way to defend against Brisbane is to crowd out central areas, making it difficult for the Brisbane attackers to find attacking combinations and runs from deep. Brisbane’s usual tactic of sending the outside centre backs up to overload on the outside wasn’t seen very much this game, potentially in response to Adelaide’s threat on the counter.

Because of these two factors, it was somewhat surprising to see it take until the 84th minute to see Mirza Muratovic and Aaron Amadi-Holloway, whose natural games both could help counteract the tight defence from Adelaide. Muratovic drops deep to link play and draw out defenders to make space, and Amadi-Holloway provides an extremely direct option and target for crosses. 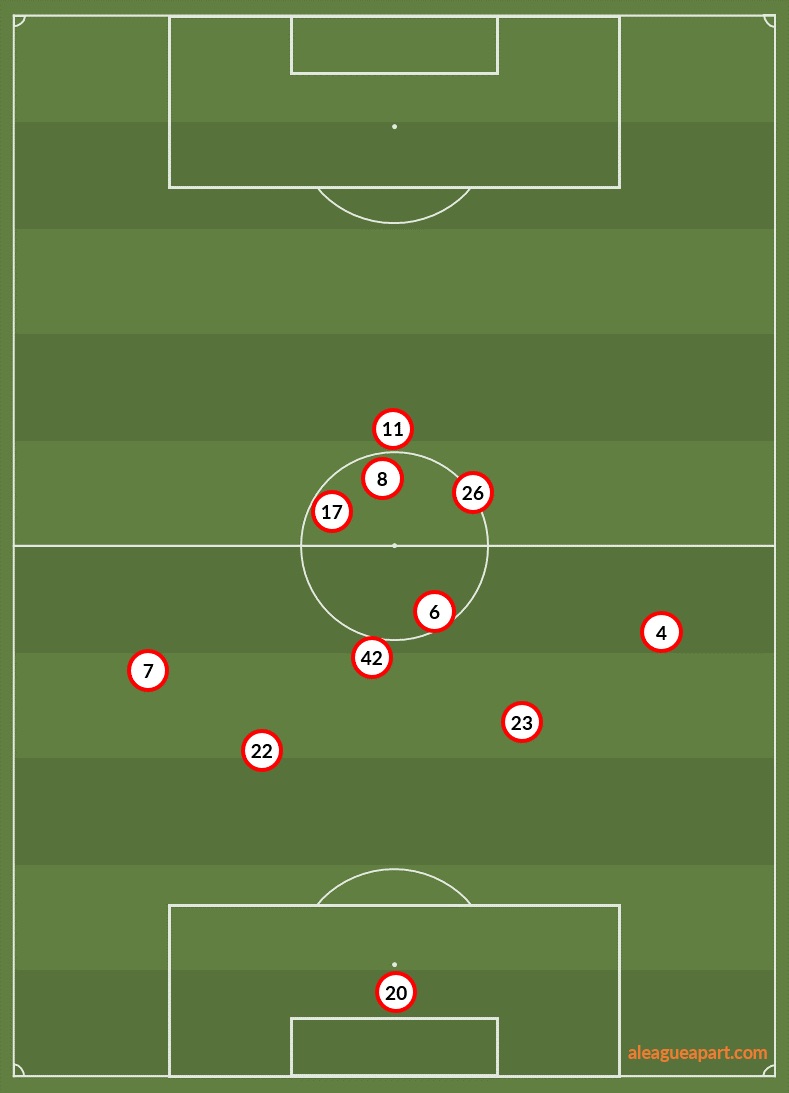 Adelaide United’s formation is often notated as either 4-4-2, 4-3-3 or 4-2-3-1, but essentially, it’s the same general structure – one central striker, two wider forwards slash wingers, and three players in midfield with Riley McGree positioned the furthest forward. The structure in this game was more like a 4-2-3-1, with the debutant Taras Gomulka the deepest midfielder and Stefan Mauk in the middle of the three.

The wingers Ben Halloran and Nikola Mileusnic would start wide, acting as direct out balls during attacking transition, running the channels well behind the Brisbane wing backs or looking to run in behind the defensive line. When the rest of the team managed to push forwards, or in more patient attacks, they would drift inside to make space for the fullbacks, who provided the main width for Adelaide. The fullbacks would stay extremely wide, hugging the touchlines, even when the ball was on the other side of the pitch.

Adelaide’s play was expansive as usual, shifting the ball side to side to both of the fullbacks, until they were able to make their way up the pitch and into crossing positions. Gomulka performed well on his debut, always presenting an easy option to his teammates to help pick up the ball and work it to the other side.

In the final third they attacked with numbers, often with at least four players attacking the box – the front three, McGree (and sometimes Mauk) joining from midfield. They attacked the goal mainly through crossing, focused on the right hand side (with ten of their 14 crosses coming from the right). This side was the source of the game’s only goal.

Adelaide’s rehearsed goal
Adelaide scored with what looked like a rehearsed move. 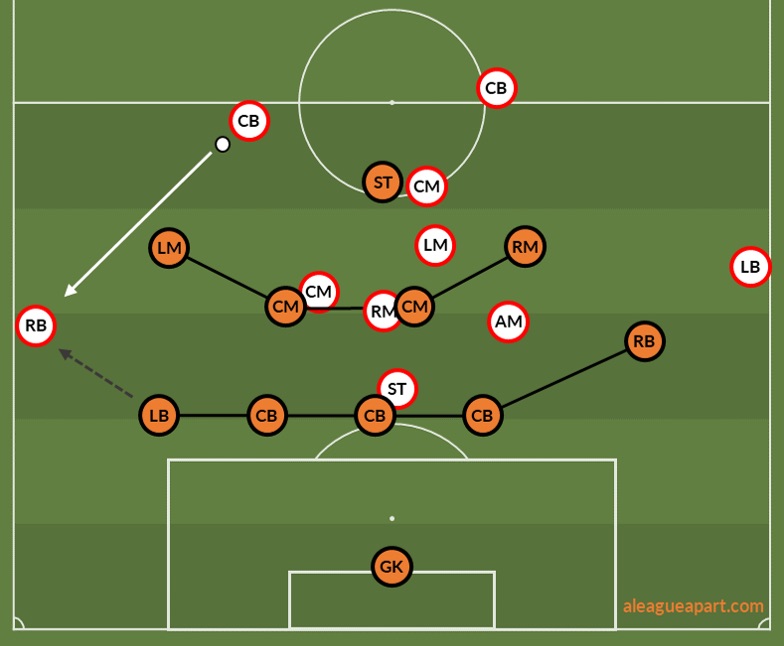 1. As Adelaide United switch from the left to the right, Brisbane have a good 5-4-1 defensive shape. Corey Brown (Brisbane LB) comes out to close down Ryan Strain (Adelaide RB). 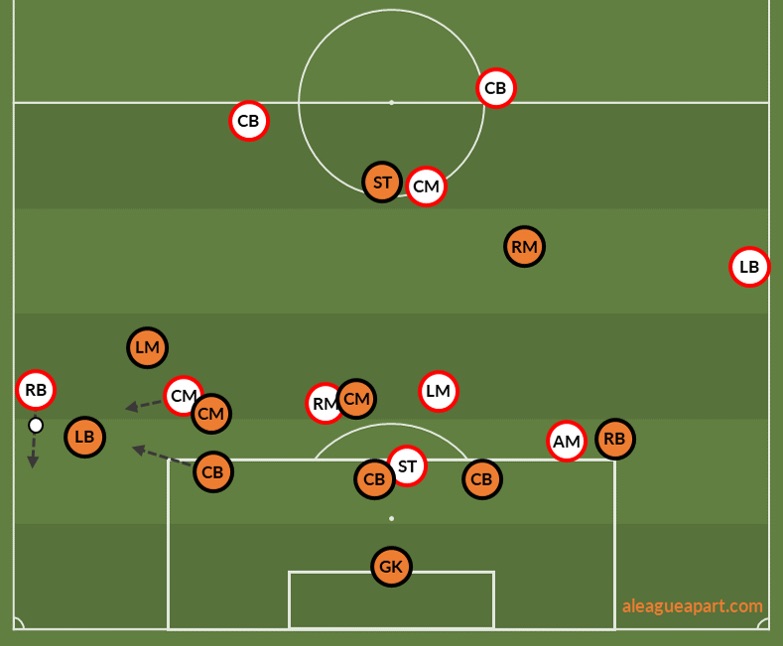 2. Macaulay Gillesphey (Brisbane left-sided CB) comes over to support his left back, and also to cover as Stefan Mauk (Adelaide CM) comes to support.

3. A gap is opened in between the Brisbane centre backs and Nikola Mileusnic (Adelaide LM) attacks this space. Tom Aldred (Brisbane CB) follows his run.

4. This isolates Scott Neville (Brisbane right CB), who is caught on the wrong side of Kristian Opseth (Adelaide ST), who runs into the vacated space to head in.

Let’s have a look at the video of the goal.

So why do I say it looks like it was rehearsed? Because the exact same scenario appeared in their last game against Newcastle Jets – Gillesphey came to support Brown, the gap opened in between centre backs, the front-post run drew out Aldred, and the crossing target Roy O’Donovan stepping in front of Neville to attempt to attack the ball.

The resemblance is uncanny, isn’t it?

Summary
Both sides showed their attacking intent and it was quite surprising to see the game end with only one goal, especially with the game seeing a total of 2.3 xG.

Brisbane will feel slightly aggrieved by the fine form of Paul Izzo, while Adelaide showed their threat from wide areas and pace on the counter.

Both managers will be pleased with their teams’ performances for their first game in charge. They will see this as something to build on over the next few games as they both look to solidify their positions in the top six for finals.