In a post-game interview, Pies defender Jack Crisp claimed the performance was an “outlier”, but likelier it’s a symptom.

But those absences also exposed a greater vulnerability that is testament to one simple reality: Collingwood have not improved on that 2018 grand final team that came within a kick of winning the flag.

The run to the 2018 grand final
Collingwood suffered numerous injuries throughout 2018, but this forced selection policies that might usually be considered conservative to become far more lateral.

Collingwood added Brody Mihocek and Mason Cox to a mid-sized and unpredictable forward line. Brayden Sier was pushed into the midfield. The side played with flare and audacity.

The mid-sized forward line
In 2018, every week, somebody would bob up with a mini-bag. The forward line was unpredictable and difficult to match-up on. But that was also a result of the forwards’ composition. 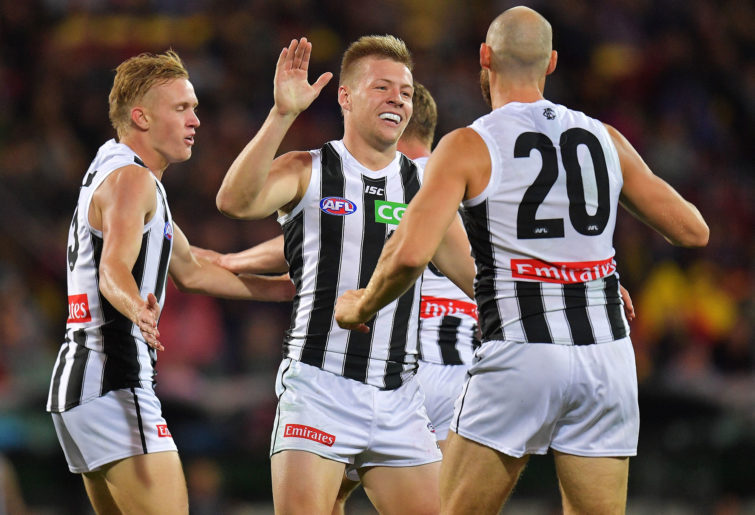 So part of the unpredictability came from half the forward six being largely unknown quantities.

Cox is too easily blocked or out-bodied now, Mihocek struggles as the number one target, and while De Goey is unstoppable on his day (as he proved against Geelong), he had soft tissue problems in 2018, and off-field issues in 2019.

Nor does it look like it’s going to happen given the current shape of their list and the mentality behind their structure.

The engine room
Brayden Sier debuted in 2018 and played 12 games, averaging 19 possessions. While statistically that might be a modest return, he was a vital component, winning the ball at the coal face and constructively feeding it out, allowing teammates such as Scott Pendlebury, Adam Treloar and Steele Sidebottom to use their unique skills to construct offences.

Sier struggled in 2019 and played only six games. This year he’s played zero.

Rupert Wills has valiantly tried to fill that vacuum, but with mixed results. Dayne Beams was recruited in 2019 to build on the midfield, but that hasn’t worked out.

Collingwood have added the likes of Callum Brown, Josh Daicos, Tyler Brown and Jamie Elliott, but with sporadic returns. None have helped the midfield click with the same synergy Sier generated over a prolonged period.

Collingwood’s midfield has deteriorated in comparison to their 2018 best.

The Grundy factor
Brodie Grundy is another who had a breakout 2018, stamping himself on the game as an elite ruckman.

Collingwood’s issue in converting his statistical dominance into midfield dominance has been well documented. 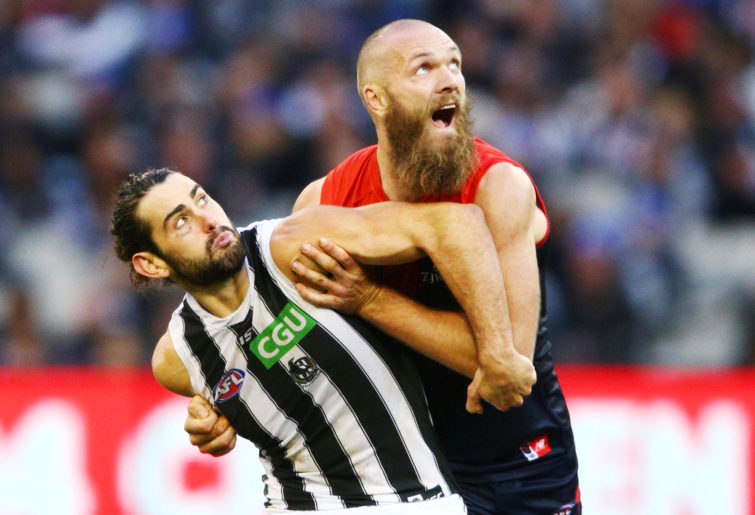 What’s happened more than Collingwood might care to admit is that opposition are reaping his tap work.

Another issue that’s emerged this year is that opponents are scragging him and sucking him into wrestling, negating him physically.

It reminds me of the way West Coast legend Glen Jakovich would play North Melbourne superstar Wayne Carey. Carey was an elite mover, but for some reason always got sucked into tests of strength with Jakovich, which Jakovich won time and time again.

Grundy needs to adapt to how opponents are playing him. He is the hunted now – and is letting himself be hunted. He has to work smarter, not harder.

As a whole, Collingwood are failing to monopolise Grundy’s talent and ability.

They’re minor shifts, but Australian rules is a game of margins. Collingwood’s margins have shifted, which showcases a change in their mentality. Whereas in 2018 they played with audacity and ran the ball, in 2019 they tried to kick their way through traffic.

This year, we’ve often seen them start with a freewheeling game, and then be grounded into indecisiveness and errors.

Either opposition have worked out that blocking Collingwood’s run blunts their offensiveness, or Collingwood have lost their initiative – or perhaps it’s a combination of both.

Over 2019 and 2020 they have rarely looked as consistently attacking and audacious over the course of a game as they did through 2018.

So where’s the improvement?
Five points. That was the margin by which Collingwood lost the 2018 grand final.

Most people might think close enough is just about good enough, and with some luck, natural evolution and players such as Jamie Elliott and Darcy Moore returning, they would find a way to build on that side.

But it hasn’t worked out that way.

Young players such as Daicos, the two Browns and Isaac Quaynor are spasmodically good, but aren’t consistently offering high enough returns to be influential in a meaningful way – definitely not the way De Goey, Stephenson and Sier impacted the side in 2018.

Darcy Moore is the one genuine asset they’ve added to the 2018 grand final side. But for as good as he’s been, how much can he offer as a key defender when so much else is misfiring? And the best defenders are all for naught when midfield pressure is lacking and the ball is being pinged in with abandon.

I’ve been surprised by the hype surrounding Collingwood this year – and last year.

If you compare them to their 2018 grand final side, the cons outweigh the pros.

Collingwood are a good side when they can get it right.