Your team ranked: The winners and losers in the 20-day footy fest

Not all teams are equal coming into 20 days straight of footy with some having byes, some not having to leave home and some travelling to a different state every week.

I’ve ranked from top to bottom the biggest winners and losers are out of the condensed schedule.

1. West Coast
Finding their form off the back of an 11-goal drubbing of Collingwood and four wins on the trot, the Eagles are undoubtedly big winners going into the condensed schedule. Being rewarded for tackling the Queensland hub early in the season, they won’t have to leave their home state for the 20-day period and also get to enjoy a bye.

They come up against the injury-riddled Cats at the perfect time, though the in-form Blues will also be playing fresh off a bye. That will be the game to watch.

2. Brisbane
Three games in Queensland for the Lions is fantastic, and they’ll be leaving the Sunshine State for only the third time since the restart when they travel to Tasmania to tackle North Melbourne. Playing all three of Essendon, Richmond and the Western Bulldogs in 13 days will prove to be a test, but if the Lions truly are a premiership contender, they should win at least two of these easily.

Expect these sides to bring along backup ruckmen to capitalise on the absence of Stefan Martin.

3. Carlton
The in-form Blues should be able to adapt nicely to life in the Western Australia hub, playing the now bottom-four Hawks, take a week off, then come up against the home sides in West Coast and Fremantle. While the Eagles are in very strong form, Carlton have tested them in recent years, despite not winning in any of their past four encounters.

If the Blues can upset the Eagles, they are in serious consideration for finals.

The verdict: two wins, one loss.

4. Collingwood
After being embarrassed by the Eagles in Perth, the Pies should rebound strongly against the Dockers following a fairly typical seven-day break. Following that they’ll head up to the Queensland hub, as well as flying in and out of South Australia to take on the Crows. While they play the 16th, 14th, 18th and 13th-placed sides, the travel schedule will test the already struggling Pies who are now missing multiple best 22 stalwarts in Jordan De Goey, Steele Sidebottom, Scott Pendlebury and Jeremy Howe.

It would be no surprise if they drop a game to the seemingly revitalised Dees. 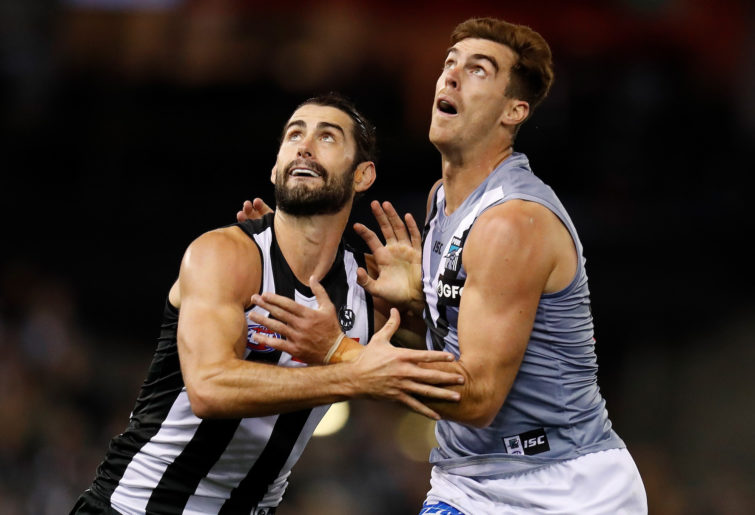 5. Melbourne
Despite being placed 13th, the competition should be scared of the Dees in the coming weeks. Alternating between four and six-day breaks will be a test for the inconsistent side, but they’d be confident in at least two guaranteed wins against lowly North Melbourne and Adelaide.

The Pies will have regained a few stars in Pendlebury and Sidebottom by the time they play them, but after a rough travel schedule, the Dees are a chance at an upset. Expect them to make a charge for the top eight.

6. GWS
There are still question marks over where the Giants sit in 2020, placed at an inconsistent 12th after Round 8 with four wins and four losses. They’d be confident in notching up wins over the Bombers and the Swans, but the Suns at Metricon should prove to be a high-quality arm wrestle, with both teams coming off a nine-day break.

With the possibility of Adam Kennedy, Toby Greene, Sam Taylor and Zac Williams back and available for selection, the Giants should take good advantage of their bye.

The verdict: two wins, one loss.

7. St Kilda
Holding their heads up high on their return from South Australia, and deservedly so, defeating both tenants soundly, the Saints won’t leave Queensland for the next three weeks. They should knock off the Swans, but three consecutive games against the Suns, Cats and Bombers should provide them with a worthy challenge.

While they could easily go 2-2 from this, I’m riding high on this exciting side and think they’ll carry their momentum through even with consecutive five and four-day breaks.

8. Port Adelaide
The Power have got some tough opponents in the Demons, Tigers, Dogs and Cats coming up. However, they’re placed so high due to having two of those games at home, and the others in neutral territory up in Queensland.

The Dees have proven themselves to be a genuine threat to anyone they come up against, but if Port manage to win both their home games and at least one against the Dees or Cats, they should lock themselves in for finals.

9. Gold Coast
Three matches in a row at Metricon Stadium followed by a bus ride to the Gabba should sit nicely in the minds of the Suns and their supporters. While they tackle finals contenders St Kilda after a four-day break following the Giants clash, being in the comforts of their home stadium should help the Suns.

With the Dons and the Tigers following, all four of these games could go either way, but expect the spark and drive of the young Suns to get them over the line in at least two victories. 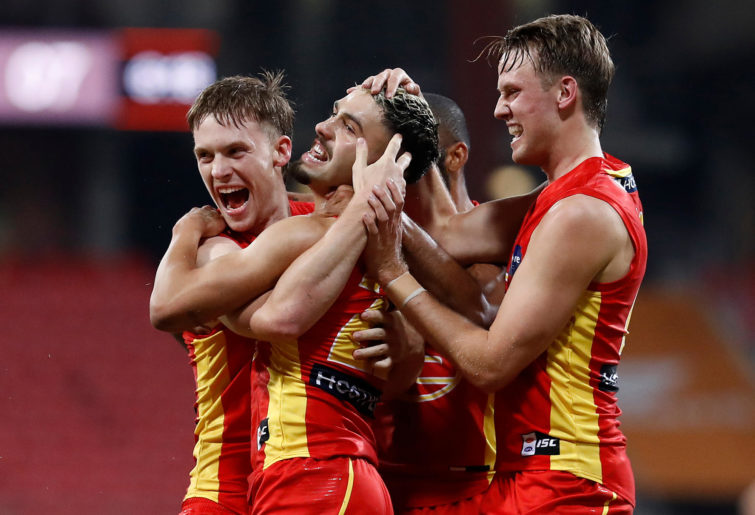 10. Western Bulldogs
The Bulldogs are one of the in-form teams in the comp, but they have some big tests ahead. Backing up their huge defensive performance against the Suns will be hard against the even more aggressive Tigers, and clashes with top-four side Port Adelaide (in Adelaide) and Brisbane will test the depth and quality of the gutsy Dogs.

Capping the run off with an eight-day break into the Crows will allow them to give some rest to tired legs.

11. Geelong
Undoubtedly a tough side who won’t go down without a fight, the Cats have some very hard asks to answer. The Eagles at Optus Stadium is never an easy endeavour, and in their first time up in the Queensland, they have to defeat the likes of North Melbourne, Port Adelaide and St Kilda.

With notable absences from key personnel Joel Selwood, Gary Ablett, Quinton Narkle and Rhys Stanley, the Cats’ depth will be tested against some strong midfield groups. After knocking off the Lions, they’ve shown that their best can match anyone.

12. Fremantle
Despite being undermanned themselves, the Dockers would be optimistic about taking on the injury-riddled Pies at home. A bye followed by the dismal Hawks could see them come away with at least one win from their next three, though the Blues might prove to be the biggest challenge.

Coming out of the Geelong game, new injury concerns have arisen with Brennan Cox, Michael Walters and Darcy Tucker all likely to miss the next few.

The verdict: one win, two losses.

13. Essendon
Not having to leave the comforts of the Queensland hub is certainly a positive for the Bombers, being one of the few teams who won’t have to travel at all through the 20-day period. The quality of opposition, however, presents the Dons with the genuine possibility of winning none of their next four.

While they avoid the top four Lions at the Gabba, that doesn’t add any confidence. This is followed by the modestly 12th-placed Giants, tenth-placed Suns and fellow top-four member St Kilda. 2-2 would be a fantastic result for the Bombers, but the reality is likely to be much less forgiving.

The verdict: one win, three losses.

14. North Melbourne
In terms of travel schedule, the Roos have it pretty good. They’ll wrap up their time in the Queensland hub against the Crows who they should be looking to beat, and the Cats. While the location is not locked in, they are set to play the Dees and Lions in Tasmania.

While they are huge opponents, the Roos would be happy they get to play them on familiar turf. They’ll still likely only beat the Crows, but the Tassie games could be more competitive than expected.

The verdict: one win, three losses.

15. Richmond
All 100,000 Tigers members will be thanking every deity of every religion that they avoid playing the Suns at Metricon and the Lions at the Gabba, the fortresses that they are. First up is the Dogs, who have made Metricon Stadium a fortress of their own, winning two of the three games they’ve played there.

After the Lions, they have only a four-day break before flying in and out of Adelaide to take on Port. While it’s a hard run, the Tigers should take home at least two victories.

16. Adelaide
After a gutsy loss to the Bombers, Adelaide would be wishing they could have played fellow easy beats North Melbourne at Adelaide Oval, instead having to fly up to neutral territory in Queensland. Home games against Melbourne and frequent fliers for the period Collingwood could be an upset in the making and the Crows first win, but they’ll still start as outsiders, especially against the Dogs.

Two six-day breaks is not a bad result with the travel broken up by two home games.

17. Hawthorn
The Hawks have found themselves stranded in the unfamiliar territory of Western Australia, out of form and having to play both Perth-based sides after a bye. No one would want to come up against the Blues at the moment, and given the recent form of Alastair Clarkson’s men, they’d be wishing they had two byes.

Unless they see some serious changes and lifts in performances from senior players, pencil the Hawks in to continue their losing streak.

18. Sydney
One of six teams to get a bye, the Swans certainly don’t have an easy swathe of opponents, coming up against the Saints, Magpies and Giants in an odd location for the New South Wales Derby, at Optus Stadium. Their victory over the Hawks could see the injury-riddled and youthful side possible notch up an upset, but they’ll likely go down in all three matches.