The current season is due to finish ten days short of spanning a full year. As if the season wasn’t emotionally draining already with passing of Kobe Bryant in January, the NBA was dealt another blow in March as it entered an indefinite hiatus amid the global coronavirus pandemic. It was unclear for a long time when the season would recommence, if at all.

In the most extraordinary of times, the NBA, its broadcast partners and the NBA Players’ Association have settled on the most unique of solutions to complete the marathon season. Enter the NBA bubble… at Disneyworld.

Twenty-two teams have gathered in Orange County, Florida to play out the rest of the season within the confines of the ESPN Wide World of Sports Complex inside Disneyworld. Starting July 30, 22 NBA teams will finish off with eight regular season games before the top eight teams from each conference will battle it out in a regular NBA playoff series.

There are four Australians bunkered down in Disneyworld. Only one has a shot at a title, and it’s a long shot at that.

Representing us on the globally broadcasted stage of the NBA restart are undoubtedly the four most recognised and talented Aussies in the NBA : Ben Simmons, Joe Ingles, Aron Baynes and Patty Mills.

What can we expect from each of these players when the NBA returns?

Best case: Baynes continues his career season with efficient shooting and reliable back-up minutes, helping him to pick up another role player contract in 2020-21.

Worst case: Baynes is unable to return to his 2020 season form due to the effects of COVID on his health, and due to his age will be fighting for scrapheap minutes in 2020-21.

The rundown: Despite Baynes’ productive season, the Suns (26-39) are a zero per cent chance of making the playoffs. Their inclusion is nearly laughable and was only made so due to the NBA’s minimum-game obligation to broadcasters. With star centre Deandre Ayton back in the side, Baynes will be bumped back to the bench but if he can produce in limited minutes he will give himself the best shot of gaining another NBA contract in 2020-21. 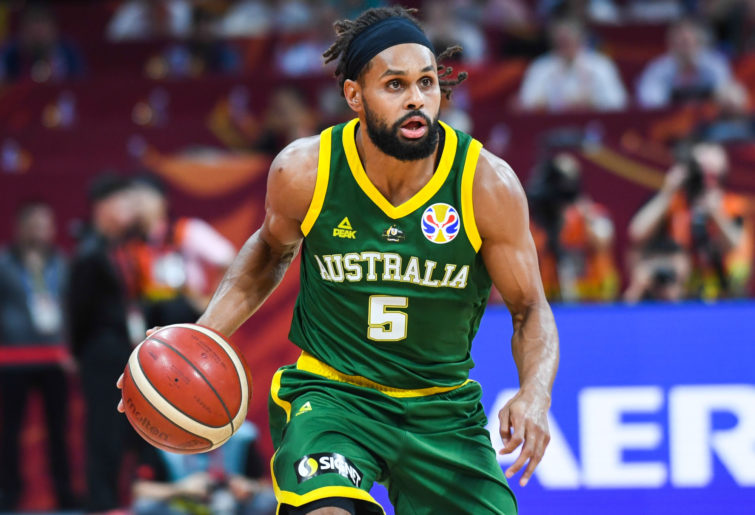 Best case: There is no best case. The Spurs will miss the playoffs for the first time since 1997. Mills’ contract situation is comfortable for next season. His goal is to stay uninjured and produce a few highlight plays for his Aussie fans.

Worst case: As above. The Spurs will miss the playoffs for the first time under Gregg Popovich.

The rundown: Aron Baynes and Patty Mills shared time together on the 2013-14 Spurs championship roster, and six years on, Mills is still kicking it for the Spurs in his career-best season scoring wise. Coming off the bench in all but one game, Mills has increased his output to 11.7 points on 43 field goal percentage including a neat 38 per cent from three. Now in his 11th season, Mills is a leader within the Spurs’ organisation and is a favourite of coach Gregg Popovich.

Unfortunately, Mills’ uptake in scoring has coincided with the downfall of the mighty Spurs, who at 27-36 need a miracle to make the playoffs. This will be the first playoffs they have missed since 1996-97, bringing to an end the longest playoff streak in NBA history. It is hardly the fault of Mills, though, who has admirably fulfilled his high-energy, all-hustle, back-up role. With a roster shake-up expected in 2020-21, Mills will remain on board as a mentor in the new squad, which will include a lottery pick from the draft for the first time since 1997. Can you guess the lottery pick from that year? Tim Duncan.

Best case: Ingles plays a strong hand off the bench for a Jazz team that shocks the Western Conference heavyweights to reach the conference finals.

Worst case: With only one win separating the Jazz (fourth) and the Dallas Mavericks (seventh), a lacklustre return in the seeding games could see the Jazz face championship contenders the Clippers or the Lakers in the first round of the playoffs.

The rundown: Adelaide native Joe Ingles has risen from relative obscurity to a fan favourite in the NBA. Ingles has made a name for himself not just with his laid back Aussie demeanour but also for his unique, no-fuss style of play, which has seen him become a regular NBA starter over the last three seasons. The Jazz have seen value in Ingles’ ability to play a point-forward role, where he can initiate an offensive possession before shifting the ball to speedy guards like Donovan Mitchell or man mountain Rudy Gobert in the post. Ingles also poses an offensive threat especially from beyond the arc, averaging over 40 per cent for his career.

His numbers are down overall this season since the arrival of highly rated former Grizzlies point guard Mike Conley and star forward Bojan Bogdanovic from the Pacers. He was forced back to a bench role initially, effectively leading the second unit, but also playing crunch minutes down the stretch. However, he managed 26 consecutive starts in the middle of the season as a result of an injury to Conley, and in that time he averaged 11.2 points a game to go with 6.1 assists, compared to 7.8 and four off the bench.

The Jazz arguably looked better with Ingles running the point with Conley out, but they will be without their second best offensive threat Bogdanovic in the bubble, which will mean Ingles gets back in the starting five. Utah face a huge litmus test in the seeding games, coming up against seven Western Conference rivals who all have a shot at the playoffs. Their spot in the playoffs is guaranteed, but if Ingles can’t get the Jazz off to flyer they could be heading for a first round exit.

Best case: The 76ers come out of the lockdown on fire, securing a top four playoff spot. Simmons uses his expanded offensive range to lead the 76ers to a conference final berth.

Worst case: Coach Brett Brown struggles to unify the offensive structure for his mismatched team as they bow out to the Celtics in the first round of the playoffs.

The rundown: Ben Simmons could retire tomorrow as the greatest player in Australia basketball history. There will always be an enduring love for the pioneers like Andrew Gaze, Luc Longley and Shane Heal, and we won’t forget our first number one draft pick, Andrew Bogut. But our Ben Simmons is an NBA superstar.

Already with two NBA all-star appearances, Simmons has established himself as a top-20 player in the league with a once-in-a-generation skill profile. Simmons has operated with his six-foot-ten frame as point forward, incorporating dead-eye passing with bully-style offence around the rim while also being renowned as an all-defence level defender across all positions. He is often compared to LeBron James and Magic Johnson.

However, with reputation comes expectation. Australians will be proud of Simmons’ every effort on the court but the heat on his underwhelming 76ers side to make use of their stacked roster to make a push for the Eastern Conference finals. They were one rim bounce away (shout out, Kawhi Leonard) from conference finals last year and while they’ve lost Jimmy Butler, fans would have been content with the added depth of Josh Richardson and Al Horford.

Coach Brett Brown is under a mountain of pressure for success in his seventh year in charge of the team. Analysts have scrutinised Brown’s inability to create an efficient offensive platform for his two stars, Joel Embiid and Simmons, while also criticising their recruitment, citing a lack of shooting depth and the absurd $180 million Tobias Harris contract. Simmons, with all his plaudits, has also come under fire for his lack of courage to shoot from more than six feet from the basket.

The 76ers cannot afford a slow start to the restart, and their post-season success will hinge greatly on whether Simmons can score as effectively as he can pass and defend.