For possibly the first time in the history of the competition, the AFL faces a live decision on which state should host the grand final, and its traditional home – Victoria – is just about the only location that can be ruled out.

While some optimism exists regarding the COVID-19 situation in Victoria, any light remains at the end of a very long tunnel.

Even if all goes well from here it seems unlikely that the state will open back up in time to do a proper job of hosting the AFL decider.

Gillon McLachlan has remained firm that until a decision is made otherwise, the MCG remains the AFL’s choice of venue – but has admitted that a change of location is a real possibility, with a decision likely to be made over the next month.

But if the grand final is to be moved interstate then choosing where to place it will be a very difficult task – and one that’s bound to leave some portion of the AFL’s fan-base feeling spurned.

Complicating matters is the fact that – at this early stage at least – each likely location is tied to a possible premiership contender.

Port Adelaide and Brisbane find themselves in the top two spots on the ladder, while West Coast have hit form and with a string of home games to come could be pushing for top spot in the blink of an eye.

Neither of the NSW teams currently find themselves in the top eight, but most would agree that GWS have potential beyond what they’ve displayed so far in 2020 – as grand finalists just last year, they can’t yet be counted out.

West Coast enjoy the most impressive home finals record of the potential candidates – they’ve played eight finals in WA in the last ten years and lost only one, an eliminator against the Bulldogs in 2016.

Brisbane had never lost a finals match in Queensland until last year when they lost two in as many weeks. GWS have won four of the five finals they’ve played in NSW, Port Adelaide have a more spotty record when it comes to finals in South Australia.

If at least one of these sides makes it into the grand final – and that seems a strongly possible if not likely outcome – they would undoubtedly be boosted by the opportunity to play the match on home turf.

That arguably makes it a tough decision for the AFL – their choice of venue may well have a big say in who wins the premiership. But, on the other hand, how is that different from every other year?

For four straight years in 2014-17 we saw Victorian teams who had finished lower on the ladder than their interstate opponents enjoy a home-ground advantage that led to a premiership win, a streak broken only narrowly by West Coast in 2018.

Short of playing the grand final somewhere ludicrous like Alice Springs or New Zealand, a fair and neutral choice of 2020 venue seems impossible – and it would be strange timing for the AFL to start caring about that now.

ANZ Stadium offers the most potential seats but hasn’t hosted an AFL match in years and is reportedly home to a herd of stray cats. That’s a selling point for a feline aficionado like me, but I suspect won’t be viewed with favour by most.

If we were making the decision based solely on good looks I would nominate Adelaide Oval as the nation’s most aesthetically pleasing venue, though certainly there’s some debate to be had there.

Both South and Western Australian can show off their impressive footy history credentials and make the claim that if anyone over the course of history has earned the right to host the first AFL grand final outside Victoria, it’s them.

However the leading contender as the situation stands appears to be the Gabba in Queensland. 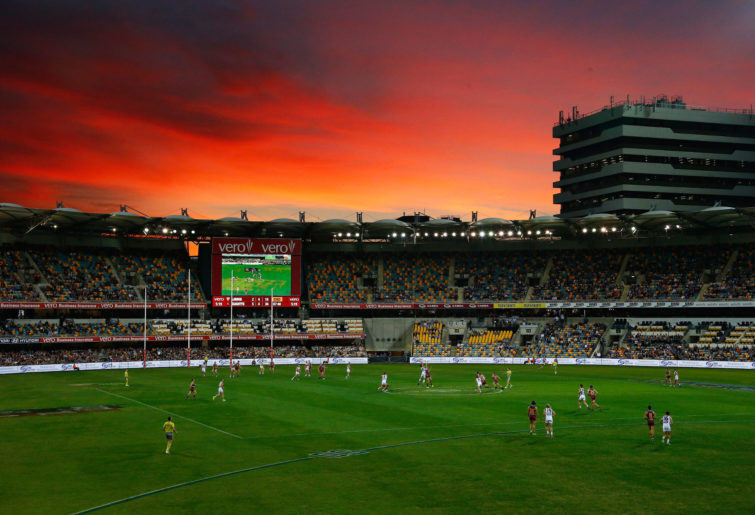 The AFL can always be relied upon to sniff out the best deal for itself and so far in 2020 Queensland has been its most flexible negotiation partner.

They’ve taken on the vast majority of relocated matches, and provided a wealth of support to the league in establishing hubs for temporarily relocated clubs.

If any state in the nation deserves the grand final because of its efforts to help keep the season alive, there’s no doubt Queensland stands head and shoulders above the rest.

And with both of the state’s clubs thriving on-field at the moment, the league could see it as a golden opportunity to help raise the game’s profile in a growth market at the start of what will hopefully be a succcessful era for Queensland footy.

Nothing is locked in just yet and season 2020 has taught us that even when decisions are written down and signed off, they can still be reversed at a moment’s notice.

Right now, in the race for the 2020 AFL grand final, it seems the Queenslanders have a nose in front. Will that remain the case when a final decision is made? Only time will tell.