Super Rugby Aotearoa has been a fantastic success at home and abroad, with huge crowds at the ground and huge TV audiences, which must be thrilling the power brokers at Sky.

Meanwhile nearly 100,000 pairs of eyeballs are tuning in at 8am every Saturday on pay TV in the UK, excited by a brand of rugby union that far exceeds their own stodgy Premiership. Every match has been a proper event that matters: high stakes, high intensity, high quality.

Meanwhile, Australia finally has a top-tier domestic league to call its own – a chance to find the best team in the country, without that fact being swamped by a mediocre position on the overall ladder or serial losses to Kiwis. It is a chance to bring the much lamented Western Force and Twiggy’s billions back to the top table and restore the game’s full footprint, which Rugby Australia tell us they are determined to maintain.

Everyone says that a five- or six-team league like this is not sustainable, because you can’t just play each other three or four times and too many Kiwi derbies will lead to too many injured All Blacks. But what we don’t want is a return to the excesses of a long Super Rugby season with its surfeit of routine cross-border matches that gradually led to boredom and reduced crowds and TV audiences.

How do we keep what we have, while filling up enough weeks with meaningful competition? 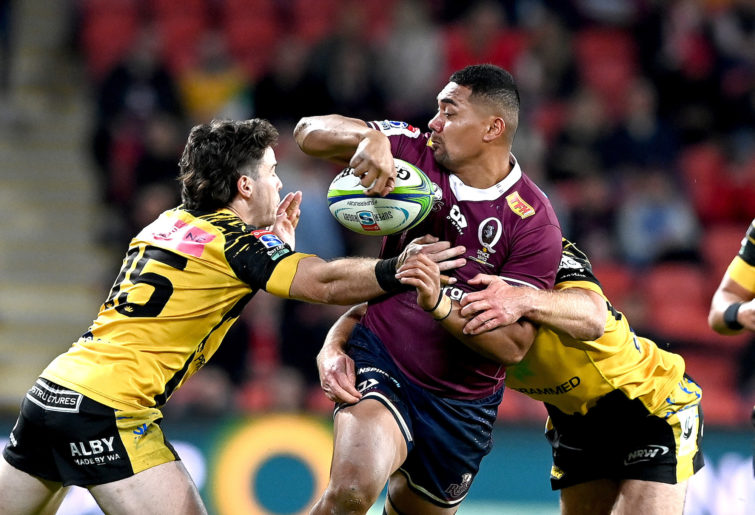 What’s wrong with five plus five?
Whichever way you cut it, a five plus five comp would have the same major weakness as the post Super 12 era: too many trans-Tasman games that people just aren’t as interested in because they expect the Kiwi team to win the match and a Kiwi team to win the comp. There’s no guarantee of competitive, world-class, high-stakes events at the same times every week. All the excitement generated in 2020 will revert to the same old, same old in 2021, both at home and abroad.

So a five plus five would not only be impractical and of less value in a sporting sense, it would generate lower interest and therefore income from broadcasters, crowds and sponsors in comparison to a competition with more in common with what we currently have. That just doesn’t make sense.

But how do we have that competition but still play enough games?

If it ain’t broke…
Let’s start with the blindingly obvious. The bulk of the season should be taken up with successors to this year’s competitions in Australia and New Zealand. Due to COVID-19, something similar is almost certain in 2021 in South Africa too. The Currie Cup was massively popular for many decades before Super Rugby and there is every chance that the crowds (if safe) and TV audiences would flock back to provincial rugby on its return in 2021.

This way we lock in and build on the incredible benefits of 2020, for most of the season at least. New Zealand get their elite, highly marketable competition. Australia get their full footprint and space for those five teams to improve without the scrutiny having to play against Kiwis every second week.

New Zealand can also bring in a Pasifika team if it is ready. The newcomers can play most of their matches in the Sunday afternoon slot, good for big crowds and running rugby, but not diluting the quality in the TV-friendly Saturday evening slot. A Pasifika team also has the enthusiastic approval of World Rugby chair Bill Beaumont, who seemed to say on The Breakdown that World Rugby should fund it.

The sixth team would also give flexibility in the number of matches between byes. More byes would reduce the attrition from all those derbies, and the attractive, high quality event rugby would bring in more money from less matches. Australia has spoken of three new teams from various places so surely one extra should be doable. If not, five will have to be enough.

This could take us well into May, which brings us to who might like to play with us for the following month or two…

South Africa
“If anybody thinks rugby will return to any format that is close to the one that existed at the beginning of 2020, you will be making a very big mistake,” South African rugby boss Jurie Roux said on the SuperSport Twitter account.

After the initial reaction to New Zealand’s plans, South Africa have now clearly accepted that a return to Super Rugby as it was is simply not practical post COVID. For 2021 they are looking at a domestic competition, followed by crossover matches against Kiwi and Aussie Super Rugby teams. The two complications are possible quarantine restrictions due to COVID and needing to be back in time for the Lions in July, but some sort of crossover tournament in the second half of May and June 2021 would make financial sense for all three parties. It would also make sense from a sporting point of view, allowing players and coaches to continue to learn from other cultures and giving South African players good, hard rugby pre-Lions.

There are any number of formats that this could take, but I will make a suggestion. We could have the top two teams from each comp playing in a cup competition in one country, the next two in a plate competition in another, and the bunnies in the bowl in the other. At a stretch, all teams would also earn points in an overall Ryder Cup style table to decide on the best league, but ideally this would require equal numbers. Each team has five round robin games and a final, with a maximum of one long haul return trip, taking us nicely to the end of June.

Japan
I will go into this further in Part 2, but Japan have shown an interest and also need to be considered. Their national league doesn’t finish until late May though, which is probably too late for the South Africans in 2021. However they could get involved in 2020 if the South Africa option falls through.

Worst-case scenario
If all else fails, the domestic season will have to end with Super Rugby TT. Not ideal, but even if the trans-Tasman games are less popular, at least it won’t linger for months, unlike the five plus five.

2021 summary
The above plan is far superior to five plus in so many ways: a proper, evenly contested, domestic competition with the home contracted Test players, giving Kiwi fans what they want but still keeping Australia’s footprint. We avoid months of less unpopular, uncompetitive trans-Tasman games. We keep up the competition, learning and relationship with South Africa and each other, but without the quantity of travel, imbalance of travel, and tedious bloat of Super Rugby. It is a full domestic season with enough variety to make boredom impossible. It’s practical and makes five plus five look insipid and unbalanced in comparison.

Coming soon, Part 1: 2022 and beyond – mice roaring together to take on the billionaire boys clubs.