They are the nice guys of world cricket. A part of me hopes that the Black Caps overachieve in the next T20 World Cup.

1. Brendon McCullum (wicketkeeper)
T20I stats – 2140 runs, 35.66 average, 136.21 strike rate, two hundreds, 36 catches, eight stumpings
How many batsmen have the audacity to ramp Shaun Tait’s thunderbolts for a six like McCullum did in 2010? I mean, he just fearlessly took on bowlers and spanked them all over the park. One of the most entertaining batsmen to watch regardless of his form, Brendon McCullum surely has given New Zealand fans many moments to cheer about.

2. Martin Guptill
T20I stats – 2536 runs, 32.51 average, 134.60 strike rate, two hundreds
Becoming the second Black Caps player to score a T20I hundred in 2012, Guptill has had a successful T20 career for New Zealand to date. In the power play overs, the Auckland batsman loves to charge down the wicket to smash bowlers for sixes, especially between long-on and extra cover. One of the most successful T20I openers, Guptill is the leading T20I run-scorer for New Zealand.

3. Colin Munro
T20I stats – 1724 runs, 31.34 average, 156.44 strike rate, three hundreds
Possibly the cleanest hitter of the cricket ball in New Zealand, Munro has been my favourite New Zealand batsman to watch in the shortest format. With a powerful leg-side game, Munro is well known for slogging bowlers for sixes over square leg and midwicket. Although his off-side game isn’t as strong, Munro has developed a handy reverse sweep/switch hit to counter off spinners.

4. Kane Williamson (captain)
T20I stats – 1665 runs, 32.64 average, 125.18 strike rate, 11 fifties
While I have tremendous respect for Brendon McCullum and the legacy he left in New Zealand cricket, Williamson has been a better skipper for the Black Caps in T20 cricket. With the best win percentage and an unbeaten run to the 2016 T20 World Cup semis before England knocked New Zealand out, Williamson leads the side. A quality batsman with great numbers in all formats, Williamson’s calmness will ensure the innings is stabilised with the bat. An outstanding reader of the game, New Zealand have defended low scores under Williamson’s captaincy.

5. Ross Taylor
T20I stats – 1909 runs, 26.51 average, 122.68 strike rate, seven fifties
Although the strike rate doesn’t reflect it, Taylor is a dangerous hitter of the cricket ball. Preferring to take a few balls to get his eye in, Taylor has dug New Zealand out of troubles many times in the middle order. Lately, Taylor has been used as a floater in the Black Caps’ T20 side and has played handy knocks regardless of the situation.

6. Corey Anderson
T20I stats – 485 runs, 24.25 average, 138.17 strike rate, two fifties, 14 wickets, 35.35 average, 8.25 economy
A powerful striker of the ball, Corey Anderson is one of my two designated finishers. Although injuries have hampered his career thus far, he remains an integral part of New Zealand’s T20 World Cup plans. With the ability to score runs at a fast pace and bowl a few overs of medium pace, Black Caps fans will be hoping Anderson remains injury free to maximise his T20I career.

7. Jacob Oram
T20I stats – 474 runs, 20.6 average, 139.82 strike rate, two fifties, 19 wickets, 41.73 average, 8.71 economy
Another clean striker of the ball, Oram rounds up my top seven. Rescuing the Black Caps’ top order failures at times, Oram has played many handy innings for New Zealand down the order – notably his 31-ball 66 against Australia at the WACA in December 2007. Although his numbers with the ball aren’t exemplary, Oram was a handy bowler in the middle overs with his military medium pacers.

8. Nathan McCullum
T20I stats – 58 wickets, 22.03 average, 6.82 economy
An accurate off spinner, the elder McCullum had a successful T20 career for New Zealand. Given the ball in the power play and middle overs, Nathan McCullum delivered most times with crucial wickets. Although he only played two games in the 2016 T20 World Cup, Nathan McCullum played a key part in New Zealand’s route to the semi-finals. 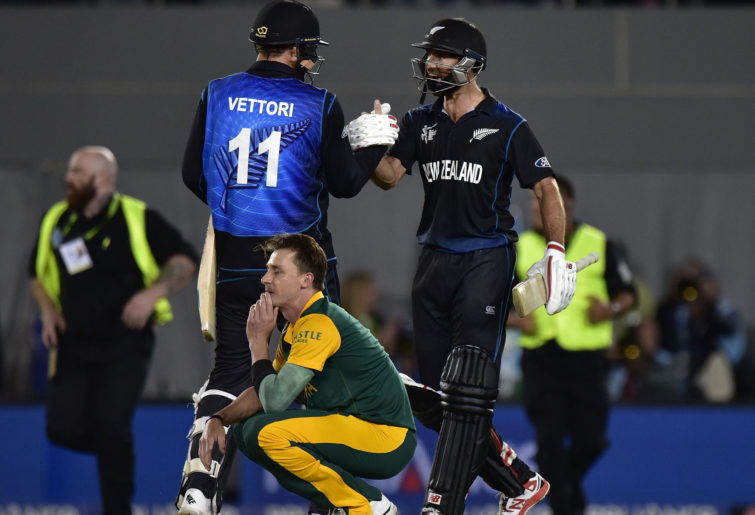 10. Mitch McCleneghan
T20I stats – 30 wickets, 26.3 average, 7.78 economy
A highly underrated T20 bowler, Mitch McCleneghan makes the New Zealand all-time T20I XI. With subtle changes of variation and smart use of the bowling crease, McCleneghan has been a successful T20 bowler in franchise leagues and for New Zealand. The left-armer from Auckland was preferred over the likes of Tim Southee and Trent Boult in the 2016 T20 World Cup as he picked up wickets in crucial stages for the Black Caps.

11. Shane Bond
T20I stats – 25 wickets, 21.72 average, 7.0 economy
The name’s Shane. Shane Bond (couldn’t resist). Had it not been for injuries, Bond would’ve taken over 50 wickets for New Zealand in the short format. One of the fastest bowlers produced in New Zealand, Shane Bond’s pace and accuracy shook batsmen, and he rarely had an off day with the ball for the Black Caps.