Do we want Mark Ella or Michael Lynagh? Andrew Mehrtens or Carlos Spencer? The genius or the general? The Australians had the best solution of all: they picked both of them in the same team!

One of the greatest delights for rugby observers is to be found in debating the merits of players, often with very different qualities, who happen to be competing for the same position. Those discussions can tunnel well into the night and are best fuelled by a single malt of at least ten years’ provenance.

Coaches are onlookers too. They are involved in planning strategy and teaching technique, yes. But ultimately they cannot step onto the field and influence the result of the game directly.

Selection is the area which forces them to wake up and pace a darkened bedroom in the middle of the night. The evaluation of two quality players each with something unique to offer in the same spot can create an eternal restlessness of the mind, especially if both are likely to be around for a few years.

Coaches can be caught second-guessing themselves, even when it appears the debate has been long settled in favour of one of the rivals.

After the 2019 World Cup final in which the England scrum was dominated by its Springbok opposite, England coach Eddie Jones pondered on the wisdom of selecting Mako Vunipola at loosehead prop:

“I accept that I made two selection mistakes for the final,” he said in his autobiography, published after the tournament.

“I should have chosen Joe Marler ahead of Mako Vunipola at loosehead prop and I should have reverted to the Owen Farrell–Manu Tuilagi–Henry Slade midfield we used against Australia. George Ford could have come off the bench when we had got into the game.

“But you never know until the game starts. You use the best available evidence and rely on your gut. I had been right against Australia and New Zealand but, as it turned out, in the biggest game of our four-year cycle, I got it badly wrong.”

Mako Vunipola and Joe Marler had been competing for the England number one jersey for the better part of seven years prior to those comments. Vunipola had started Test matches on two separate British and Irish Lions tours in 2013 and 2017, but Joe Marler was the preferred choice for England for most of the in-between times.

The pendulum seemingly swung towards Mako for good during the Eddie era, but his statements reveal the choice was still balanced on a knife-edge.

The issue is Vunipola and Marler are both loosehead props with little in common as players. Marler is the set-piece technician, Vunipola the ball-player. It’s more complex than that, but those are the broad strokes.

The tense, dramatic struggle between the Brumbies and the Reds on Saturday evening showed that Dave Rennie may soon be facing a comparable dilemma on the other side of the front row.

Where Alaalatoa emphasizes high work-rate and doing his job outstandingly well within strong unit structures, the Tongan Thor is much more of a maverick. He is primed to explode in a shower of fireworks, with power-packed runs, big hits on defence and steam-rolling scrums – but nobody knows where, or when they will occur.

Can anyone imagine Allan Alaalatoa making this spectacular touchline run and offload for a try a couple of years ago?

The Brumbies captain won’t worry that he doesn’t have that kind of athletic ability. He knows he has the edge in work-rate – 14 runs against eight, five passes to none, 16 tackles against 14 on Saturday. He also knows that his contribution to try-scoring sequences are far less visible, but every bit as vital.

Allan Alaalatoa’s speciality set-piece is arguably not so much the scrum as the driving maul in the opposition red zone. His movement was key to the three tries the Ponies scored from those situations on Saturday. It was a real lesson in the subtle changes of positioning needed to exploit weaknesses in maul defence.

From their first lineout attempt, the Brumbies looked to take the outside corner and drive infield:

Alaalatoa slots into the vital role as ‘lead blocker’ in the third layer of the maul, just in front of the ball-carrier, hooker Folau Fainga’a. It is his responsibility to steer the drive wherever he senses weakness in the defence and lead Fainga’a over the line.

The Reds defence is relatively light on their right, so the Brumbies skipper shifts over to provide an extra body on that side: 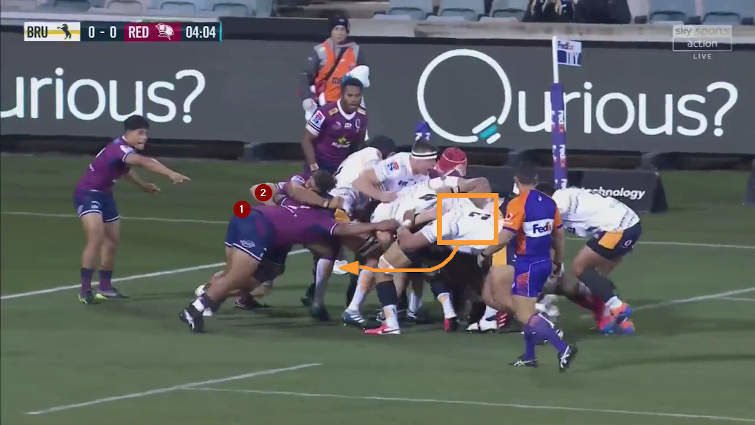 On the very next play after drawing a penalty, the Brumbies scored a try by varying the point of attack when the Reds over-compensated on that infield corner:

On this occasion, three other Reds forwards have followed the cue of the primary defender, Brandon Paenga-Amosa, and overloaded the right side. The Reds hooker has jammed in at a right angle to the touchline to stymie any repetition of the earlier drive: 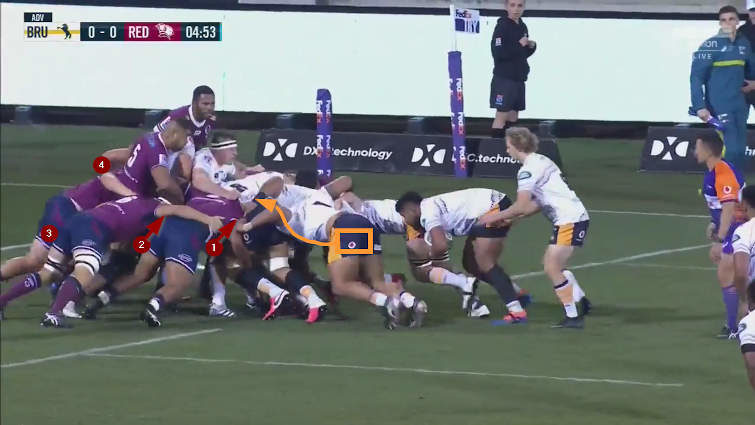 It is Alaalatoa’s job to detect this change of emphasis and redirect, and he does it expertly. He changes his angle and leads Folau straight up the middle – by the end of the play all four of those Reds forwards have fallen away and are no longer factors in the defence.

The same pattern was repeated for the Brumbies’ next set-piece try in the 33rd minute, except on this occasion the Queensland right-side defenders fell out of the picture even more quickly (at 0:40 on the above highlights reel).

By the end of the game, the Brumbies had the Reds maul defence exactly where they wanted it. With the maroon forwards again stacking up on the openside, Alaalatoa steered the maul down the short-side for the home side’s third driving lineout try of the game (at 2:35 on the reel).

Taniela Tupou’s speciality set-piece is without doubt the scrum. Where Alaalatoa tends to stay square and within the unit discipline at all times, Tupou is much more aggressive and looks to create discomfort for his opposite number whenever possible. After a relatively even contest against Scott Sio, Tupou gave his former teammate, James Slipper, a rough ride when he came off the bench:

Despite the fake news offered by the Fox commentary team in their reading of this scrum, Tupou is quite clearly taking an acute angle into the gap to pressurise Fainga’a and roll over the top of Slipper.

There is likewise a huge difference in the interpretation of the roles of the tighthead prop with ball in hand. All of Alaalatoa’s runs came off the scrumhalf on hard carries into traffic, and the Canberra skipper showed typically robust awareness of when to keep the ball and when to pass outside:

Alaalatoa judges the pass into the second line of attack nicely, and Irae Simone is able to confirm the break with an offload to Rob Valetini which takes play deep into the backfield.

Tupou doesn’t play off 9, he takes up a position outside the flyhalf, and sometimes even further out beyond the second playmaker:

Tupou is beyond both of the Queensland primary distributors, James O’Connor and Hamish Stewart, and Reds attack designers are not at all spooked by the idea of positioning a prop in the wide channels: 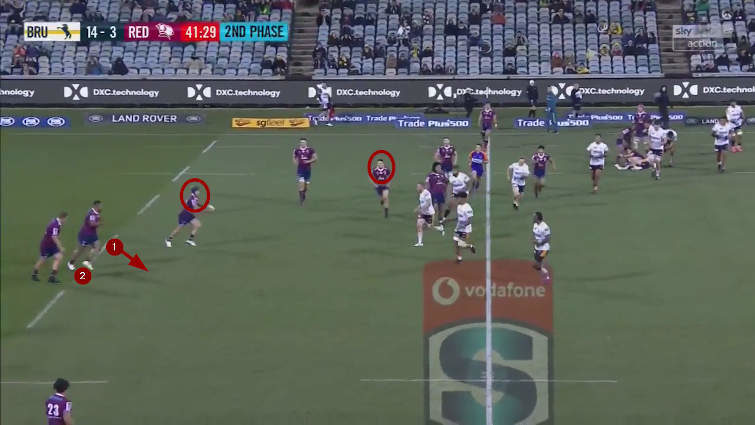 Some of the same contrasts emerge on defence as well. Alaalatoa has very sound technique (15 successes out of 16 attempts on Saturday evening), and he can tackle low or high effectively:

Taniela Tupou is less disciplined. He will look to fly out of the line to make the big hit, and he is a naturally high tackler who can attract the referee’s ire. 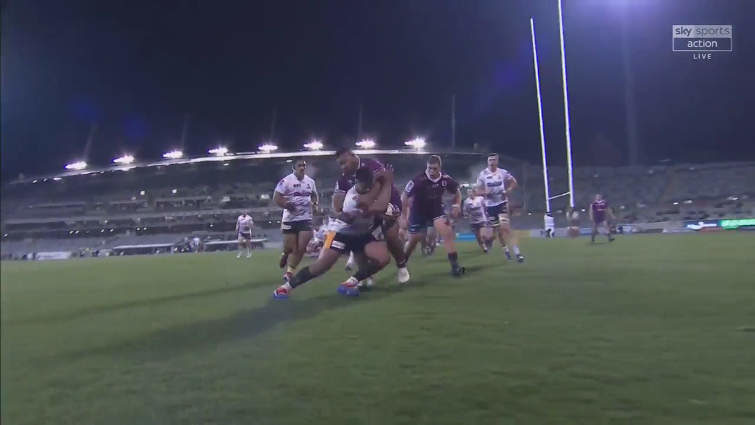 Summary
Although Eddie Jones invariably picked Mako Vunipola as his starting loosehead prop for England whenever he was available during the last World Cup cycle, his comments after the 2019 final suggest that the selection choice between Vunipola and Joe Marler was always an unexpectedly close call.

Dave Rennie may also find himself pacing the bedroom in the wee hours of the morning as he attempts to find the right accommodation between the two most outstanding tighthead props in the Australian game, Allan Alaalatoa and Taniela Tupou.

Alaalatoa is a typical product from the Brumbies’ forward factory. He is tight, technical and rarely make a mistake in his choice of play. He works through the tape to the very end of the game and never quits.

Tupou is the more talented athlete of the two. He is more aggressive, and therefore potentially more of a handful for the opposition than the Brumbies man in the scrum.

What sets them apart at present is the depth and completeness of Alaalatoa’s knowledge of his own role in every department of the game. There is a prevailing sense that Tupou’s optimal role in attack and defence has yet to be determined at Ballymore, and that may be holding him back.

Alaalatoa to start at number 3 with Tupou powering off the bench for 20 or 30 minutes at the tail end of the game? Allan shifting back to loosehead prop to allow Taniela to start? There are some intriguing possibilities for Dave Rennie to ponder – without tearing his thinning thatch out – in a position of strength for Australian rugby. Any which way you can manage it, mate.