Cook has previously credited coach Seibold for developing him into a State of Origin hooker but he won’t have any sympathy for his former mentor when Brisbane meet Souths at ANZ Stadium on Friday night.

Since Wayne Bennett and Seibold switched clubs in a messy deal at the end of 2018, a fascinating grudge between the two powerhouse sides has blossomed.

And while his teammates have been reluctant to feed into the growing rivalry between the two coaches, on Tuesday Cook said he loved it.

Asked if he had taken the opportunity to stir Bennett up about Friday’s clash against his former club, Cook joked: “It’s a long week still and there’s a few days of training so we’ll see how we go.

“I love that part of it, I love when (the media) find two things that connect the teams together and put a bit of a rivalry behind it and make it a grudge match to pump that game up even more.

It’s a personal battle for Bennett who just last month was forced to publicly deny he had left the Brisbane roster in ruins when he was sacked at the end of 2018.

Bennett then took aim at Seibold, saying the roster is full of Test and State of Origin quality players who are not performing at their best.

And although the Broncos are second from bottom on the ladder, Cook agrees.

“There’s a couple of teams sitting down the bottom of the ladder, they’re still quality football sides,” he said.

“There’s got to be some teams at the top and some at the bottom, it’s just the way it goes.”

“We’ve got to make sure we respect them this week. I don’t feel sorry for other teams, we’ve got to worry about what we’re doing here.”

The Rabbitohs are currently sitting on the edge of the top eight after a mixed run of form and are desperate for a big win to avenge their round-two loss to the Broncos.

However, they will have to do it without in-form second-rower Jaydn Su’a, who was found guilty of dangerous contact at the NRL Judiciary on Tuesday night and will miss one game.

Rule changes were brought in to trial, but try telling Broncos’ fans their loss to the Cowboys in the Round 20 opener was of no importance to anyone.

And just like that, the Brisbane Broncos’ season from hell is finally over. The club entered this season full of hope and expectation despite having their 2019 season ended in a then-record 58-0 humiliation at the hands of the Parramatta Eels at Bankwest Stadium in the first round of the finals. Many thought that they […] 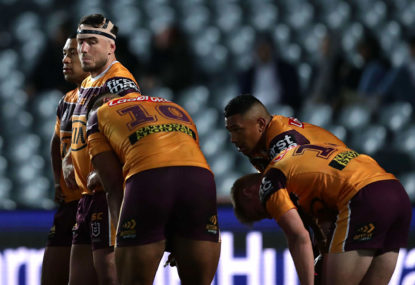