While officials are concerned about the trend of players flaunting social distancing laws online, privately they remain most wary of Gould, especially with his history of coinciding finals with making “enemies” and “decisions”.

Despite Gould departing his role as general manager last year, the club is taking no chances with being disrupted by an alpha spat, inexplicable payout or puzzling midnight sell-off of Api Koroisau.

Club officials believe that with the side in prime form and nestled securely inside the top four, it exposes them to a greater risk of being sacked by Gould, or worse, offered a rash long-term deal.

For those unaware, the Gould Years were a heady mix of benevolence and brutality at the foot of the mountains, with the godfather of league implementing a myriad of pathways which were used to good effect to bring in juniors and ship out settlements.

Despite orchestrating a handful of successful seasons and an envious football operations structure, by the time Gould was ready to depart, the club was lurching from week-to-week and taking it one controversy at a time.

Even though the former supremo no longer enjoys any corporate authority or car park privileges at Panthers, officials are concerned he could leverage his 34 media platforms to deceitfully claim “him and Ivan are sweet”, or worse, campaign for Garth Brennan.

As a result, the club will ban any association with Gould, while also taking the additional precaution of locking up its cheque book and emerging rookies and any of their fathers who may be coaching first grade.

Many pundits believe the Panthers could have the firepower to challenge for a premiership in 2020, despite the club’s recent habit of falling victim to injuries and Gould’s fondness for hiring foes.

Ivan Cleary has successfully modelled a title-challenging outfit from the remains of the Gould era, which following his departure was nothing but the smouldering rubble of heartache and Cameron Ciraldo.

With the club flying so high, many pundits are wondering exactly how they can stuff it up without the former kingpin there to pick a fight, and whether Cleary’s squad can overcome its other famous enemies, that being themselves and them selfies.

As for Gould, he is being touted as a new NRL consultant, meaning he could be the first administrator in history to mount a media campaign demanding his own sacking before dishonestly selling himself to a rival on a higher wage for less work.

Despite the unique concept of banning a former employee, Panthers officials are hopeful of lifting the prohibition in 12 months. Under five-year-plan scaling, this should see Gould welcomed back by 2035, coinciding with the end of Reagan Campbell-Gillard’s contract. 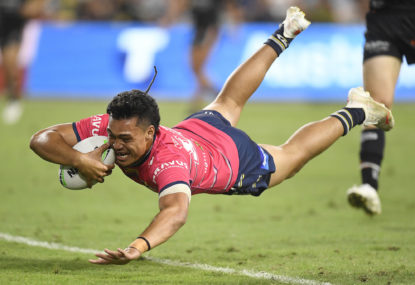