With Phil Simmons at the helm for a second time and a much more competent board, West Indies are building a strong T20 squad in time for next year’s edition of the T20 World Cup. It wouldn’t surprise me if the defending champions went away with the trophy again.

A man who brought the Gangnam style into the cricketing world, T20 teams need characters and players like Gayle to be successful.

Although he scored a seven-ball duck on T20I debut, Evin Lewis has ensured that Chris Gayle’s absence in the West Indian T20 side hasn’t been felt badly. Just like Gayle, Lewis is a powerful batsman who hits sixes for fun. Out of his 934 T20I runs, 438 of those runs have come in sixes.

Lewis has been a match-winner for the West Indies and if I was being very harsh, I would say he needs to work on strike rotation against spinners. Despite that flaw in his game, Lewis has a fantastic T20I record.

The best way to describe Marlon Samuels is when he does well, West Indies do well. Often playing as an accumulator, Samuels has held up an end to allow the likes of Gayle and Lewis to free their arms.

With most West Indian keepers having poor records with the bat, I’ve gone with part-time keeper Lendl Simmons to be the keeper in the XI. Another accumulator who likes to shuffle around the crease a lot, Simmons has been an excellent player for the Windies in the shortest format.

Originally ruled out of the 2016 T20 World Cup, Simmons would receive a lifeline when Andre Fletcher was injured halfway through the tournament. He would end up smashing 82 off 51 against India in the semi-final at Wankhede as West Indies chased down 193 with two balls to spare.

One of the best T20 players of all time, Kieron Pollard walks in at five. Not outrightly consistent with the bat, Pollard is an impact player and a match-winner with bat and ball. Smashing sixes for fun, bowling handy medium-pacers and taking screamers on the boundary effortlessly – will there ever be a T20 specialist with the total package like Kieron Pollard in the future?

Currently captaining the West Indies limited-overs teams, Pollard will have an eye on defending the T20 World Cup crown.

Originally a quick who lingered in the lower order, Andre Russell is one of the most sought-after T20 cricketers in franchise cricket. Having more opportunities up the order in the past few years, Russell has shown his might with the bat – using his brute force to smash sixes all over the park.

Although a ban cost one year of his career due to a doping violation, Russell has come back in stunning fashion and will continue to evolve as a T20 cricketer. 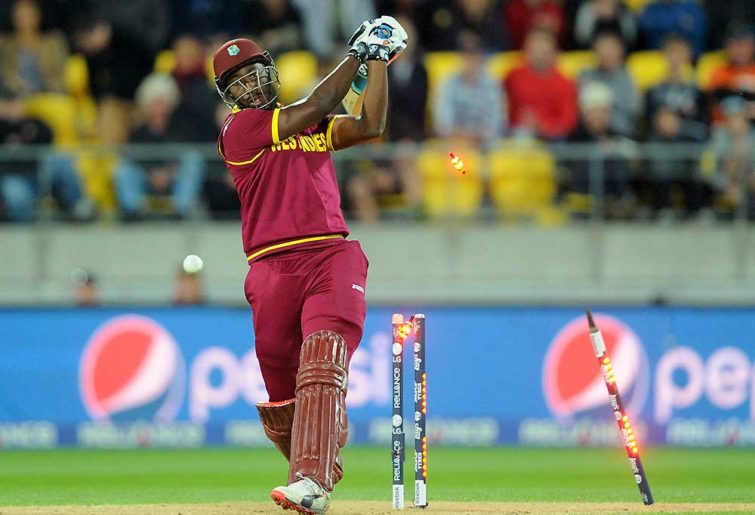 One of the smartest T20 bowlers until date, Dwayne Bravo is an entertainer. Although the strike rate doesn’t show it, Bravo is an aggressive batting option down the order and his smart changes of pace with the ball has seen him pick over 50 scalps in T20 internationals.

Who can forget his champion celebrations during the 2016 T20 World Cup, as Bravo took nine wickets en route to West Indies winning the 2016 edition?

Becoming the first cricketer from St Lucia to be named West Indies captain, Darren Sammy has been West Indies’ best skipper in the T20 format. An aggressive captain who has not been shy at speaking up for himself and his teammates, Sammy captained West Indies to two T20 World Cup titles.

Down the order, his unique batting style gave the West Indies a solid finish in the death overs and his off-cutters brought breakthroughs in the middle-overs with the ball.

One of the best T20 spinners of all time, Sunil Narine’s career in the shortest format has been fruitful. A mystery spinner, Narine’s many variations (carrom balls and doosras to name a few) bamboozled many batsmen and made the likes of Mahela Jayawardene and Ross Taylor look very average.

Although he isn’t the same bowler following a remodelled action, I’m really hoping that Narine takes part in the next T20 World Cup.

Badree is a special breed out of the T20 bowlers. A leg-spinner who doesn’t turn the ball much, Badree was a new-ball specialist for Dareen Sammy and would reward the skipper’s faith with wickets.

A match-winner who could change the tide of a game in a few deliveries, Badree was one of many in this XI in order for the West Indies winning the 2012 and 2016 T20 World Cups.

Having dismissed the likes of Virat Kohli and Alex Hales twice in T20 internationals until date, Sheldon Cottrell has shown his promise as a seamer. Bowling left-arm seamers, Cottrell uses his natural angles and variations to fox batsmen and taking wickets.

Alongside his handy bowling, Cottrell is well-known for his army-style celebrations in honour of the Jamaican Defence Force.