But as the rain tumbled down last Friday night, crack. There it was, with lightning-bolt venom.

Up by 16 points with 32 minutes on the clock, all the Warriors had to do was jab Manly with a fork, they were done.

But for reasons only known to Panther discard Jack Hetherington, the head-spinning prop upsized and levelled the Kiwi enforcer with an axe.

The chin-point shot not only opened the door for a Manly escape but sent those in the know scurrying for two important answers.

After several minutes of stargazing, Taupau answered the first. And with a slow departure, the stretcher remained dry.

A thousand hardy Lottoland souls answered the second before the first was asked.

Henry Perenara eventually blew the whistle on the cheapest shot of the season and Hetherington was first up the tunnel – for a ten-minute break.

In a bygone era, a full house Brookie would’ve exploded and complicated the firebrand’s departure up the competition’s most antiquated tunnel.

And with good reason, what else did Hetherington need to get sent off – an axeman’s hood?

The result is one thing, fair play another.

As it was, Manly’s ineptitude cost them in the end. But against 12 for the final 30 minutes, well, we’ll never know. And it’ll be little consolation to Hasler, when as expected, Graham Annesley admits Perenara got it wrong.

The match review committee have already said as much. The grade-three offence would normally result in a three-match ban but with the 24-year-old marksman’s poor record – the sixth charge in 22 games – his quiver could be empty for five weeks.

But whatever the suspension, in my book it’s not enough. A few weeks for a lazy outstretched arm, for sure, but this was a cold-hearted deliberate cheap shop. 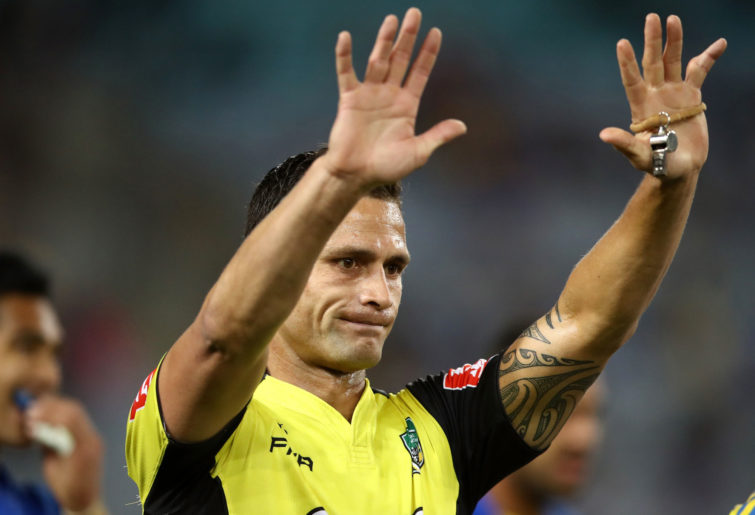 It was certainly no lazy arm playing catch-up for tired legs. Still fresh after the break, the tank was full. Both men held their line and kept their feet.

With the Warriors set to tackle Penrith the next week, and as per the loan agreement, Hetherington knew he wouldn’t be required – why not miss a week in style?

Following impact, Hetherington’s hand went up before Taupau boarded the roller-coaster as if to acknowledge mission complete. It was English old-school, up there with Adrian Morley’s callus high shot on Robbie Kearns at Wigan in 2003.

On approach, Hetherington’s right arm rose above shoulder height ready to strike – the target anywhere from the shoulders up.

With Jared Waerea-Hargreaves a recent high-profile scalp, why not add another? Even if the suspension extends beyond the Panthers match. After all, the Warriors will have served their purpose by the time Penrith come calling before the finals.

None of which will make sense to Marty Taupau. But when he comes around, good luck to whoever lands the job trying to justify Hetherington’s ten-minute breather against the two weeks Wayne Bennett copped for entertaining his missus.