It was probably the weekend where the penny dropped in some ways; where if worse comes to worst around the trans-Tasman talks and Australian rugby does need to continue down this same domestic route for 2021, the quality of the rugby being served up is actually pretty bloody good.

And it’s only got better since.

So it was oh, so appropriate that the weekend just gone – Round 6 – was the one that turned the competition on its head. Everything we thought we knew has to be questioned going into this weekend coming’s Round 7, and the competition’s remaining rounds are now in a complete state of flux.

Everyone’s tipping took a hit, but the competition itself is the big winner.

For one thing, we now definitely have four teams eyeing off the three playoff spots, and you don’t have to go back too far at all to recall a time when it was more about which order were the Brumbies, Reds, and Rebels were going to finish in.

The Waratahs’ handsome win over Queensland at the SCG dropped the Reds from second to fourth in forty minutes of first half destruction that I’m not sure even family and friends saw coming. And now, the Waratahs, Reds, and Rebels are separated by just three points.

The Western Force aren’t entirely out of the equation, but their objective is pretty simple. The only team with four games to play, the Force would need to beat all four teams to get to at least 18 points, and then rely on two of the Reds, Waratahs, and Rebels directly above them on the table winning only one of their remaining three games. 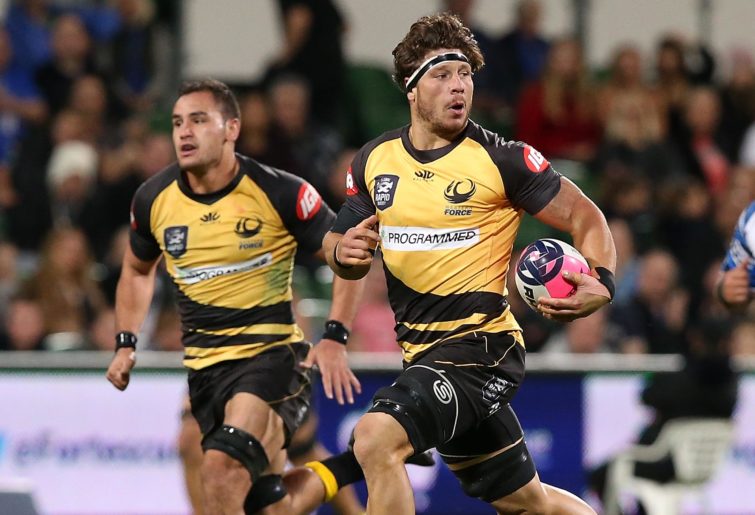 Can the Force turn things around? (Photo by Paul Kane/Getty Images)

A loss this weekend to the Waratahs up on the Gold Coast would just about consign their finals aspirations to the too hard basket.

The Waratahs’ big win jolted them ahead of the Reds ahead up to third on the table on for-and-against, and will undoubtedly be eyeing off more table movement over their remaining games, starting with the Force on Friday night.

After that, the Tahs face the Brumbies in Canberra in Round 8, and the Rebels at a venue yet to be determined, but likely to be in Sydney again. They have a bye in Round 10, and will have to sit back and watch final round games to know whether or not they’ll be required for the second versus third playoff.

But as impressive as their win was over Queensland, it almost feels like it has glossed over the magnitude of their comeback, having been totally outclassed by the Rebels at the SCG a fortnight ago.

Going down 29-10, and being held scoreless by the Rebels for the last 58 minutes, there was a real concern in the aftermath just how the Waratahs were going to find points, never mind challenge the three teams above them.

A bye week and a red-hot first half put paid to all that, and all the very valid questions that existed about creating opportunities without front-foot ball have for this week at least been shifted north of the Tweed River. I don’t think we can overstate the confidence boost that comes with a win like that one on Saturday night.

Two wins out of their next three would get NSW to at least 19 points, but any bonus points accumulated along the way will come in very handy.

That same equation applies to Queensland, who host the fired-up Rebels this weekend followed by the Force on the Gold Coast next weekend. They have a bye Round 9, before facing the Brumbies in the final round before the playoffs.

The Reds’ biggest question remains around their set piece, and specifically their lineout throwing, where in recent games they’ve shelled five of their own throws against the Waratahs, and another five against the Brumbies. As good as they might be around the breakdown, no-one can be affording to give up that kind of ball at set piece.

A win over the Reds this weekend would push the Rebels to at least 18 points and could well put a toe in the playoffs door, though if this last weekend taught us anything, it’s that there’s plenty of life in Super Rugby AU yet.

No doubt, Dave Wessels will give plenty of thought around keeping Matt To’omua at inside centre – To’omua himself conceded that might happen, such was Andrew Deegan’s game at 10 – but the Reds’ biggest challenge is going to be containing Matt Phillip, who was outstanding in the Rebels demolition of the Brumbies pack.

The Brumbies themselves have probably gone into a bye week at precisely the right time, and will be hoping they can turn their form around in a similar fashion the week after the next. 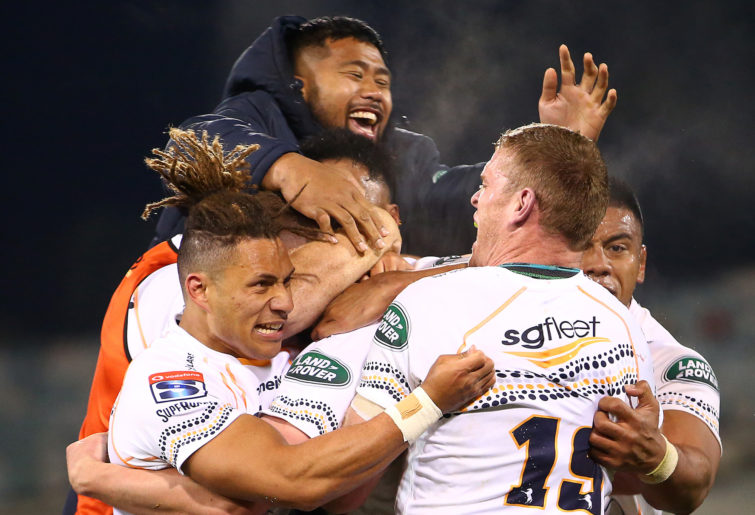 The Brumbies in good times. (Photo by Mark Nolan/Getty Images)

They’ve got a big question on their hands ahead of their next game, against the Waratahs in Round 8: with Noah Lolesio still likely another month away, what can they do find some spark in their attack again?

Bayley Kuenzle found the going tough behind a well-beaten pack last week, and there was an evident disconnection with the midfielders in attack. But with Lolesio out, the only other option to Kuenzle would be to start Mack Hansen. And the Brumbies don’t strike me as a team to make knee-jerk reactions after a loss.

The bye this week will probably help this. And so will a bit of remedial tactical kicking work over the next week or so, because this was arguably the Brumbies biggest failing on a wet night at Leichhardt Oval. While the Rebels were hell-bent on pinning the Brumbies back in their 22, the Brumbies kept putting up poorly placed kicks in midfield that weren’t chased particularly well either.

It all produced a set of results that no-one tipped but everyone enjoyed, simply because of what it’s done for the competition going into the last four rounds.

What originally looked reasonably obvious suddenly looks anything but. And that’s not a bad thing at all.