The Crows looked hot to begin proceedings, with Rory Laird and Brodie Smith playing crucial roles in the Crows seven-point lead at the first break. The Pies looked lacklustre around the contest as their injury-riddled midfield struggled.

The second term had a lot of the same storyline, with the Crows not quite being able to put Collingwood away despite having seven scoring shots to halftime to three. Being a low scoring game, nine points was quite the buffer for Adelaide, with Laird having outrageous numbers in the shortened quarters.

The second half began slowly, with both sides posing as strong defensive forces although it wasn’t long before Nathan Buckley’s side clicked into gear. They kicked 30-4 in the third term including two goals within the last 20 seconds of the quarter to lead by a healthy 17 points at the final change. The Pies midfield had lifted, with Taylor Adams leading the way and Steele Sidebottom taking his game up a notch. Trey Ruscoe and Jaidyn Stephenson were lighting up the forward line and Darcy Cameron loomed ominously.

Laird was easily looking like he would be taking the three Brownlow votes as he continued his tear through the Collingwood midfield.

The Crows were once more competitive in the last, showing some fight but it was Collingwood’s class that shone through and pushed them over the line. Shane McAdam took a wonderful hanger and converted to give the Crows hope, cutting the margin to just 11 points. Though it was the Pies who took the wheel from there booting the next three goals through Josh Thomas, Brody Mihocek and Darcy Cameron to take the game away.

There were plenty of positives for the Crows despite losing by 24 points. Tyson Stengle showed plenty in the forward line, booting two goals and setting up a couple of others including Elliot Himmelberg’s in the last term. Laird was dominant with an astonishing 37 disposals as well as five marks and nine tackles to go along with it. Himmelberg looked dangerous on numerous occasions when the ball entered attacking 50 for Adelaide as he continues to develop and improve as one of the better young key forwards in the competition.

The Pies will be happy with the four points from that game as their injury list continues to recover. Adams and Sidebottom lead from the front in the midfield, amassing 49 disposals between them. Cameron looks like he could hold that second tall role for the Pies for the rest of the season over the out of form Mason Cox. Ruscoe also looks like an excitement machine that loves a goal or two as he managed to kick two majors in just his second game.

The Crows were gallant though the Pies ground it out. With 12 scoring shots to the Crows 13, the accuracy of the Pies was what got the job done for them as they defeated the Crows by a comfortable 24 points. 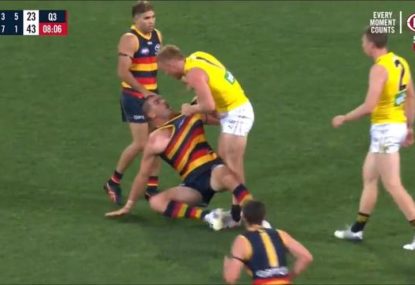 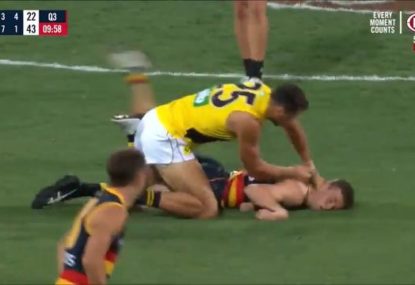 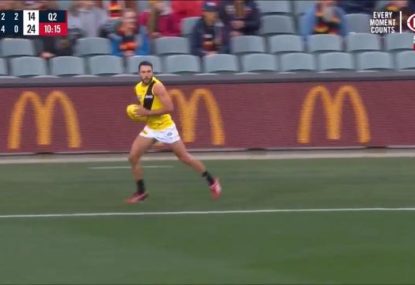