The Betoota Advocate has a knack for reading the room.

Its recent headline – ‘New “Holding the Ball Rule” In AFL Somehow The Biggest Issue Victoria Is Facing Right Now’ – pretty much sums up the state of affairs for AFL lovers at the moment.

Amid a suffocating pandemic and a dampening economy, footy fans – condemned to our homes and consuming the game on a daily basis – are just about fed up. And it’s all got to do with the umpires’ new interpretation of the endlessly controversial rule known as holding the ball.

Holding the ball is a staple of our great game. The collective roar of “BALLLL!” by the impassioned masses in the MCG, as an opposition player – streaming down the wing and blissfully unaware of what’s behind him – is chased down, and crunched. The umpire’s piercing whistle, bent knee, and exaggerated, slow-motion, two-arm signal, awarding the free kick to the delight of the deafening crowd. The coach slamming down the phone, the players stopped in their tracks, changing direction and sprinting towards the other goal, the crestfallen player, caught, gone, reluctantly handing the ball over to a gleeful opponent.

What we would give to replicate this feeling, to be back at the MCG right now. To live and die with our team’s wins and losses, to feel a collective sense of purpose with the tens of thousands walking up Brunton Avenue, the open gates, welcoming us in like old friends. What we would give to cry “BALLLL!” with great urgency, as if the umpire will be swayed by our desperate pleas. But when we return, will the umpire be swayed by our desperate pleas? The truth is, we don’t really know. And neither do the commentators, nor the players, nor perhaps the umpires themselves. 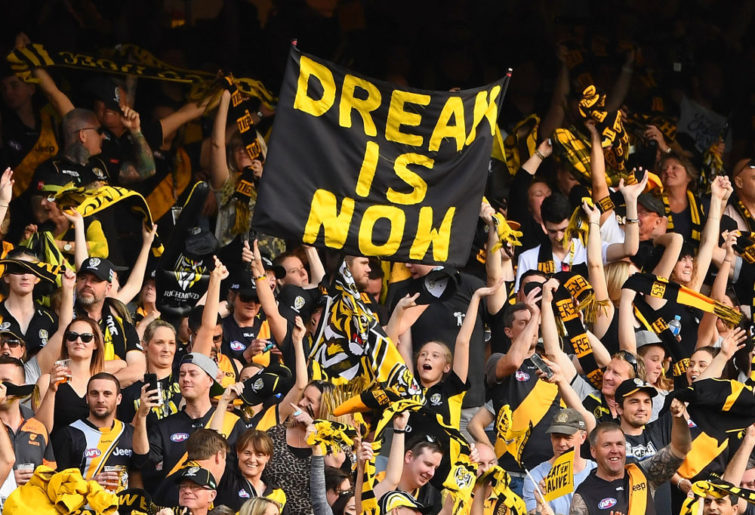 The holding the ball rule is incredibly confusing, and more important than ever. Back in the 1970s, it was not uncommon for umpires to pay over 100 free kicks per game, and the average fluctuated between 70 and 80. Today, a game with more than 50 free kicks is considered over-officiated.

As players have become fitter and more skilful, the tackling standard has improved, with fewer free kicks paid for a high tackle, push in the back, or for a player being tripped or legged. Despite the AFL introducing the deliberate rushed behind rule, and then tightening the interpretation of both that rule and the deliberate out of bounds rule, free kicks remain far less prevalent.

Fewer free kicks, and greater skills that make teams adept at keepings-off footy, have made holding the ball increasingly important as a method to stop play and turn the ball over.

Supporters – never shy to encourage an umpire to pay holding the ball – interpreted the rule harshly, often giving their own reason for why the decision should be paid. How did he get rid of it? Spun him 360! He just dropped it!

But despite the fans’ insistence, dropping the ball has never been a rule.

Here are the four occasions where umpires are instructed to pay holding the ball.

Each scenario is layered with confusion and controversy.

Scenario 2 – intentional incorrect disposal
Again, confusion persists. Did he intentionally let the ball go, or was the ball knocked out in the tackle? Was that a throw, or a super-fast handball? Did she drop the ball in the tackle, or did the tackle cause the ball to drop?

Scenario 3 – no genuine attempt
Perhaps most controversial of all is no genuine attempt, subject of stricter interpretation and heightened media scrutiny since earlier this year. This rule requires players to make a genuine attempt to dispose of the ball, designed to prevent players clinging to the ball while they wait for the cavalry to arrive. But the question of what constitutes a genuine attempt is ambiguous. How can an umpire — directed to stand 20-25 metres away from the contest — see if a player is genuinely trying to handball the ball, or is handballing the ball to himself in an attempt to fool the umpire? What about when the ball-carrier is immediately tackled, and the ball is held to her chest? What defines a genuine attempt when the player can barely move his arms? Nobody seems to know.

Indeed, in the past few rounds, we have had front row seats to the unsightly spectacle of confused players turning to the umpire and waiting for a decision, completely ignorant about the call to come. It is a terrible look for a professional sport when the players, fans and commentators have no idea about how an essential rule will be interpreted from game to game and contest to contest; where the decision may depend on the officiating style of the controlling umpire, or the new direction given by their coaches that week. 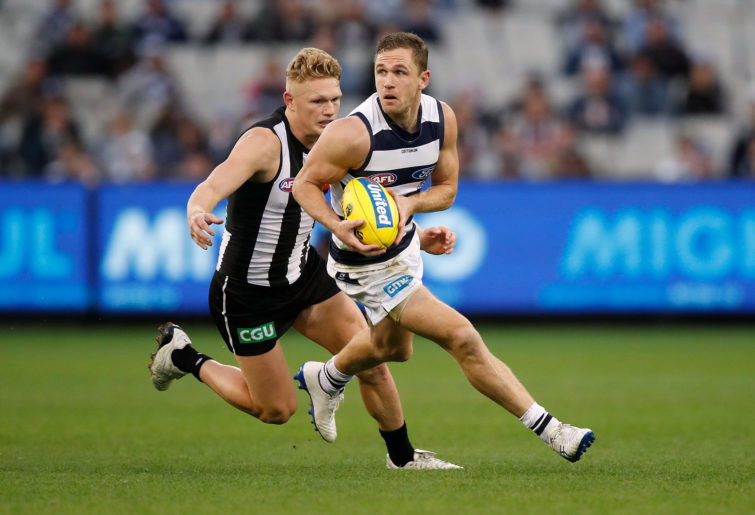 So, where do we go from here?

Certainly, blaming the umpires won’t help. Few professional sports leagues worldwide change the rules from year to year. Fewer still tinker with interpretations from week to week. In fact, I challenge you to find any sport other than Australian rules football where the professional league’s officiators are told by their coaches: ‘This week, I want you to focus on X’.

Add to these persistent challenges the fact that AFL umpires are part-time employees, currently living interstate and away from their families, and they can hardly be blamed for some inconsistency around interpretation. Especially considering they cover 15 kilometres per game, make thousands of split-second decisions on the run, and they are being asked to tap into players’ minds to evaluate their mental intent. We’re all armchair experts, but deep down, we know the umpires are doing the best they can.

Next, it might be useful to place a rules expert in the commentary box. This is a practice implemented effectively in America’s NFL, where former officials carefully explain to the mass audience the referee’s decision-making process.

Far too often, AFL commentators mix up the different elements of holding the ball, conflating prior opportunity with no genuine attempt, and confusing the fans. Channel Seven’s Saturday night commentators are frequent culprits.

Crucially, we need to find a way to align the wishes of the fans, the commentators, the coaches, and the league. Most stakeholders of our game agree that scores are too low, and that congestion must be reduced. Unfortunately, they have disparate ideas for solving the problem.

A little over a month ago, Hawthorn coach Alastair Clarkson – whose biting commentary on the game can move mountains – decried the umpires’ reluctance to “pay the ones for holding the ball”. Clarkson was complaining about Scenario 2, incorrect disposal, asking “What’s happened to our game? You can’t have that many tackles and not one of them be incorrect disposal”.

The next day, AFL CEO Gillon McLachlan jumped in, suggesting that “we need to be tougher on holding the ball”. But unlike Clarkson, McLachlan wasn’t referring to incorrect disposal. He was focused on Scenario 1, prior opportunity, arguing that “prior opportunity needs to be tighter”. 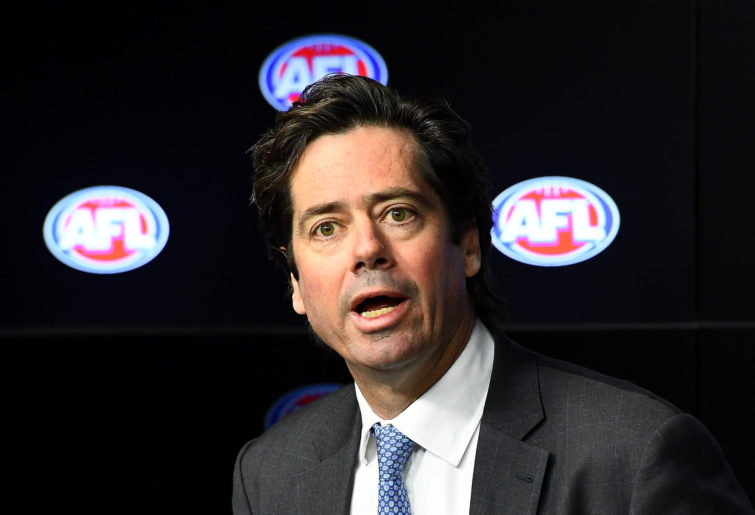 According to The Age reporter Sam McClure, “the umpires had been reminded about the ‘genuine attempt’ part of the rule in that same week” as a way to reduce the number of stoppages and reduce congestion.

So while a coach was complaining about players getting away with illegal disposals – a view shared by many in the media – and while the league boss was complaining about umpires giving players too much time to dispose of the ball – a view shared by most fans at any given game – the umpiring department decided to focus on no genuine attempt, one part of the rule that was, until now, rarely contentious. In the aftermath, confusion prevailed.

One way to reduce congestion without a heightened focus on no genuine attempt (and without attendant confusion) might be for umpires to call ball-ups much faster – almost immediately after a player is tackled. Fewer players will be able to reach the contest by the time the umpire throws the ball up, injecting space and freedom to move.

With this adjustment, no genuine attempt will be almost redundant. Others have suggested making the umpires’ job even easier by penalising any incorrect disposal, intentional or not. Essentially, if a player collects the ball, and disposes of it without kicking or handballing, they would be penalised. This would be a useful change, but perhaps an unfair one on the ball-carrier.

And while we wait for that solution to come, let’s make the umpires’ job easier, not harder. Stop making them read players’ minds, eliminate the confusion, and improve the spectacle of the game we love.