Eight talking points from NRL Round 14

There are just six weeks to go in the NRL season, and the top eight is looking more set in stone. Here are my talking points from a fascinating Round 14.

It’s amazing what happens when you play for the full 80 minutes
The consistency switch finally flicked for the Dragons on Friday.

Not from week-to-week. That has been there arguably since their first win of the season. The Red V haven’t had a bad loss since the twin defeats at the hands of the Warriors and Bulldogs when play first resumed.

But it’s the first time they have played for 80 minutes in a number of weeks. It follows three frustrating performances where they were the better team for chunks of the match but still found ways to lose. The Eels might have been a little bit flat, but the St George playing for the entire game without switching off was different.

It’s not a surprise the blue and gold were flat, given the five-day turnaround from a slugfest at Kogarah against Cronulla, and their clash with Melbourne next week will be pivotal, but the Dragons deserve plenty of credit for winning at Bankwest.

Whether it Cameron McInnes at lock, who ran more than 170 metres to go with 58 tackles, or the creativity and poise of Adam Clune, it was a solid performance.

Finals may be gone, but 2021 is worth building for now with Paul McGregor out the door. He was sent out a winner and the playing group clearly respected him, as evidenced post-game, but he wasn’t a good long-term fit for the club.

The upcoming period will be one of the most important in club history. Getting the right coach and sorting out player recruitment will determine whether they can rebound from a tumultuous seven years. 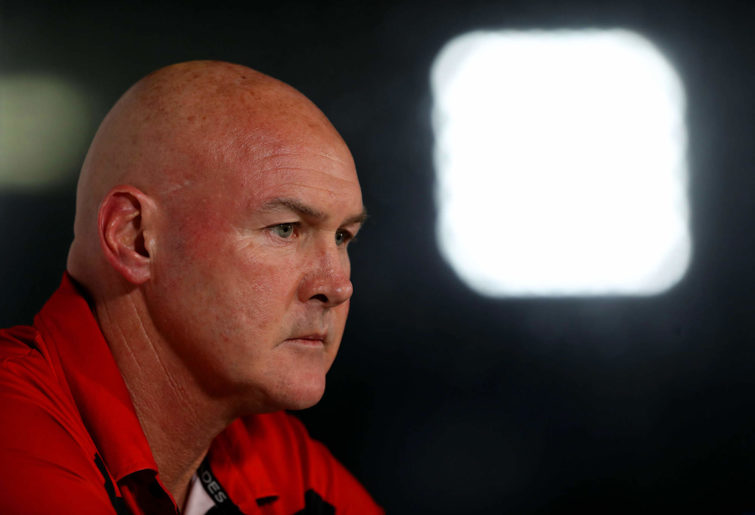 Have the Broncos hit rock bottom?
Whether it was being beaten 59-0 by the Roosters, losing 30-12 to the Titans and 26-12 against the Warriors in back-to-back weeks, or being hammered 48-0 by the Tigers, it looked like things couldn’t possibly get worse for the Broncos.

But then on Saturday, they squandered an 8-6 lead at halftime to the Raiders, eventually losing 36-8.

The attack was average, but defensively, it was a downright inept performance. When Corey Harawira-Naera simply ran past three defenders 60 metres from home without a finger being laid on him, it summed up the entire season for the Broncos. It was a level of defence which wouldn’t be accepted in junior footy.

They have now lost 11 of the last 12 games, and rock bottom may still be on its way. With a run home featuring the Roosters, Panthers and Eels, they could well wind up with the wooden spoon.

And just maybe, it’s what the club needs to kick back in the right direction, because little else is working.

Biting deserves a send-off, but the punishment needs to be used more
The send-off was wheeled out for only the second time this season on Saturday, with Kevin Proctor given his marching orders for biting.

As much as Proctor was remorseful afterwards, there is no place in the game for acts like that. Referee Henry Perenara and the rest of the officiating team made the correct decision.

The Titans second-rower is going to spend many, many weeks on the sideline for the incident, and it could be that the judiciary makes an example of him. Biting isn’t exactly a regular occurrence, but it must be stamped out immediately whenever it does bare its ugly teeth.

But – and it’s a big but – while the officials should be commended for their work on Saturday, even if it did end the Titans’ chances of staying competitive against the Sharks, the NRL need to get serious on other severe acts of foul play.

The stand-out is the eye gouge. The send-off hardly ever gets brought out on the rare occasions a player commits an eye gouge, and yet, you could say it’s the dumbest, most dangerous thing anyone could do on a footy field.

There are other instances – less so in the modern game – where the send-off should be used, and yet, it isn’t.

It’s been great to see officials using the sin bin with regularity, but for inexcusable acts, the send-off must be used more frequently.

Christian Welch proves himself another Melbourne success
Melbourne are a team full of unsung heroes. Players that at other clubs would barely be noticed, but under Craig Bellamy and his fine-tuned system are borderline stars.

One of those is Christian Welch.

The prop has had his share of injuries, but he has never had a star quality about his game. He isn’t a flashy forward, like Payne Haas for example.

He simply gets stuck in and does his job, which he has been doing better and better with each passing week as he re-establishes himself in the Melbourne 17.

His improvement has been picked up on by Bellamy, who promoted him from the bench to starting team, then left him there.

In Thursday’s game against the Roosters, he quietly racked up 190 metres from 19 runs to lead all Storm players, and chipped in with 86 post-contact metres and 32 tackles.

Jahrome Hughes and Ryan Papenhuyzen might have taken all the credit for the win, but without players like Welch, or Kenny Bromwich and Dale Finucane, it wouldn’t be possible for the Storm to be as good as they are.

There is also the small matter of a Queensland jersey at the back-end of the year. Welch may not be all that far away.

The Warriors can play finals footy in 2021 if travel restrictions ease
The script said the Warriors were supposed to fall in an absolute heap when they lost four players back home.

They weren’t supposed to win another game.

Well, they went and beat Manly last week, then turned around and hung in the battle against the red-hot Panthers on a soaking wet Central Coast this round.

While one might argue the Panthers were due for a let-down, and probably need a loss sooner rather than later, not many would have predicted the scare was going to come from the Warriors.

Consistency may still be avoiding the Warriors, but that’s hardly a surprise given their circumstances.

Under a coach with a record of putting the building blocks in place for a rebuild (he built the roster at Newcastle), they could well further even the wildest of expectations for next year and play finals footy.

With Roger Tuivasa-Sheck and Chanel Harris-Tavita in the side, plus some more signings likely (Euan Aitken has already joined), they have the creativity to put points on, so long as their forwards compete.

If they can get 12 home games, then the Auckland-based side could be the good news story the competition needs.

Someone might want to sign Alex Johnston
There are some big signatures on the open market right now, but Alex Johnston’s name should be at the pointy end of the list.

For one reason or another, the Rabbitohs seemingly don’t see the value in the prolific try-scorer, but rival clubs circling certainly do, and Johnston will be a prized addition for another club.

While he does have a tendency to make silly errors or drift in and out of games – and the fact he wants to play fullback could be an issue – there are few wingers in the NRL like him.

Already this season, he has 12 tries in 14 games, to go with 95 in 136 for his career. It’s an incredible strike rate, and with his ball running – remember, he picked up over 300 metres just last week – it makes him stand out in a crowded market.

That comes with another double on the weekend, including a late clutch try to ensure the Rabbitohs stayed in the contest against North Queensland.

If South Sydney won’t sign him, it could well be a club like the Storm, who may need to replace two wingers, seeking his services. 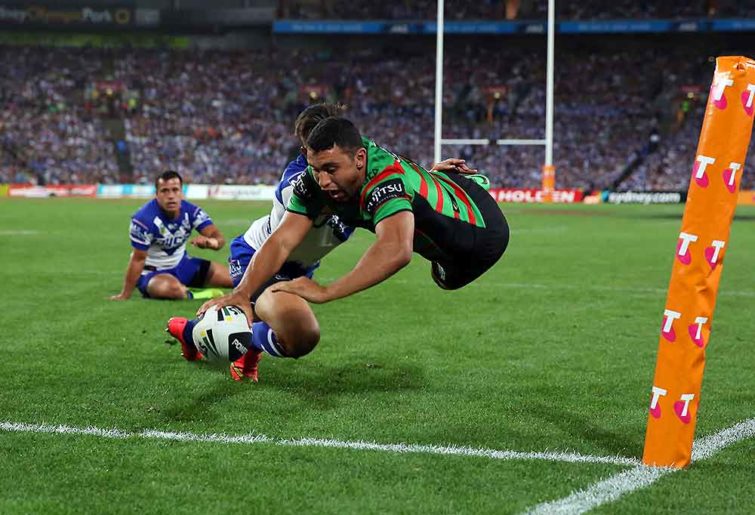 This is a familiar sight for Alex Johnston.

Manly have one last roll of the dice
Every game carries more importance in a reduced season, and injuries suddenly rule key players out of a much higher percentage of the fixture.

That is the hole Manly find themselves in after three straight losses, including a couple of high-effort, low-polish performances against the Warriors and Knights in the last fortnight.

And while the injury toll has been enormous on Des Hasler’s men, it can’t be the excuse for slumping down the table. There are plenty of clubs battling with long casualty lists. They have proven they can match it with clubs they lose to, but have been struggling to string together 80-minute performances.

The casualty list is expected to start easing slightly next week with the return of Tom Trbojevic, but Manly, already out of the eight by four points, can’t afford any more losses. That is an issue because next on their draw are the Rabbitohs, followed by the Storm.

After leaving points on the field against teams like the Warriors, Dragons and Knights on two occasions, the finals have arrived early for the Sea Eagles.

Tom Trbojevic will be a very welcome addition for Manly. (Photo by Cameron Spencer/Getty Images)

Chopping and changing hurts the Tigers defence
Michael Maguire must find a formula and stick to it.

Win or lose, the way the Tigers defended against the Bulldogs proves once and for all the team needs major improvements in that regard. But more changes aren’t the answer.

Canterbury have only scored more than 20 points twice this season – both against the Dragons – but 28 is a new high for the blue and white.

Good defence is a result of solid combinations, good work on the training paddock and putting it all to work in NRL games across the course of the season.

While the changes Maguire made this week may have been forced, their edges have been prone to leaking points all season. It doesn’t come as a surprise given the way he has ruthlessly discarded talent.

Benji Marshall has been dropped, Luke Brooks was put on the bench for three weeks, and their forwards have been a revolving door at different points throughout the year.

It’s one thing to drop players for being poor defensively, but when the changes are constant, almost making it look as if the coach has no idea who the best 17 is, it impacts the players and their combinations.

They may have escaped with a win on Sunday, but it wasn’t good enough if they have any hope of playing finals footy.