The hard facts about NRL rules

Nothing frustrates me more than ignorance, especially when it comes to sporting matters. So it pains me when I see commentators, pundits and fans shooting their mouths off about topics on which they have failed to properly inform themselves.

This is a particular problem when it comes to public comment on NRL matches. So many people are eager to give their opinion on refereeing decisions made in games, when they haven’t even bothered to find out what the actual rules say.

For example, how many, even among professional rugby league journalists, know the rule regarding knock-ons?

Specifically, that it states:

Rule 28. A knock-on shall be ruled in any of the following circumstances:

i) a player loses control of the ball, which travels towards his opponent’s goal-line, and does not regather it before it makes contact with the ground or with another player

iii) the ball makes contact with a player’s hand or arm and travels backwards, but the referee thinks it looked pretty bad

iv) a player fumbles but regains control without the ball touching anything or anyone else, but the referee reckons they don’t deserve to keep it

Now, maybe if people knew that rule, there’d be a lot less angst over so-called ‘incorrect’ knock-on calls. In a similar vein, the rule on forward passes explicitly states that:

Rule 29. The referee shall rule a forward pass every fifteenth time a pass is thrown forward during a game. 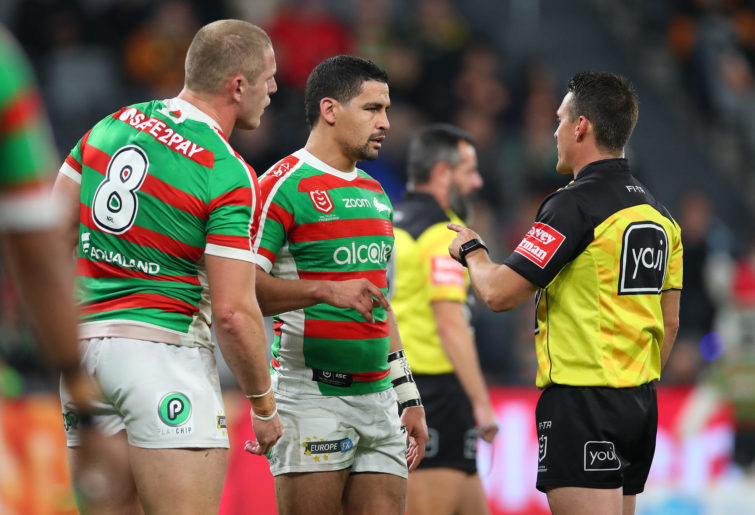 A knock on is whatever the ref says a knock on is. (Photo by Cameron Spencer/Getty Images)

Simple, right? And further to that, when it comes to the bunker:

Rule 29A. The bunker is unable to determine whether a ball has travelled forward, unless the ball hits the ground – this is due to the fact that the human brain has been proven incapable of telling the difference between “forward” and “backward” unless grass is involved.

Of course, the ignorance isn’t restricted to issues of ball control. How many of us, when we comment on high tackles, know that the relevant rule is:

Rule 34. A penalty shall be awarded for a high tackle if the tackler makes contact with the ball carrier above the shoulders, except in the following cases:

iii) the ball carrier is shorter than the tackler

It’s also important to keep in mind that, while the above lays out the circumstances in which a high tackle can be penalised, further punishment for a tackler is laid out in:

Rule 34B. A player shall be sent from the field if it is deemed that his actions were a) dangerous; b) deliberate; and c) occurring in the one game a year that the NRL head of operations hit when he threw a dart at the fixture

Hopefully, now that the facts about NRL rules have been made accessible to all here, there’ll be no more uninformed comment from the cheap seats!