Few, if any, Australian rugby personalities have been plying their trade overseas as long as Manny Edmonds. The former Waratah flyhalf left Aussie shores way back in 2002 when he ventured to France to continue his playing career.

These days Edmonds is the backs and attack coach of French Pro D2 outfit Oyonnax. The 43-year-old has been carrying a clipboard now for a decade after a very successful career on the pitch both at home and in France.

It was way back in 1998 when Edmonds started out with the Tahs. That same year, in fact, he also got his first call to represent Australia.

Gaining international exposure aged just 21 seemed to portend a long and fruitful career with the Wallabies. It didn’t quite work out that way.

“I made the Wallabies in ‘98 and went on the European tour,” recalls Edmonds. “When I came back for the ’99 (Super 12) season I found myself on the bench with Christian Warner starting.

“Again in 2001 I played a pretty good season coming back into the Wallaby fold and playing in my second Test. Then the following year (I) was on the bench again with the Waratahs as a replacement behind Duncan McRae.

“I got a bit frustrated with it all as I was going two steps forward five steps backward, basically.”

Quality Aussie fly-halves seemed to grow on trees in those days. The late 90s-early 00s were, of course, the prime years of Wallaby great Stephen Larkham. There was also Elton Flatley and Shane Drahm in Queensland, and a trio of quality 10s battling for one jersey in New South Wales.

“Bernie at the Brumbies was probably the best (number) 10 in the world at the time,” says Edmonds.

“I don’t see it as unlucky me coming through a really good era. It’s probably the best era Australian rugby has had in the past 30 years and I was a part of it. I was just a bit unfortunate that there were guys that were probably better than me.”

French teams contained a much higher percentage of domestic players back then with Perpignan no exception. Although among a throng of Frenchies, there was at least one face that Edmonds was familiar with.

“I rocked up and luckily Ed Carter – who I played with at the Waratahs – was there,” he says. ”There was also one Kiwi and couple of Argentinians but otherwise it was very much a French side.

“With not many foreigners around it meant that I spent a lot of time with the local boys which helped me to integrate, also learn French quicker.

“Because I was playing quite well, that helped (me) get accepted by the locals and allowed me to adapt quicker. We had a very close-knit team and did some very good things in my first two years.”

He’s referring here to Perpignan’s appearance in two major finals during that time. Unfortunately for Edmonds and his teammates, they finished runners up in both.

“We were dominated from the get-go in both of the finals” says Edmonds.

“It was tough. No one wants to get that far to lose, but we were happy to get to the big stage. We weren’t considered favourites to make either final and we turned a few heads doing so.”

From an individual standpoint, Edmonds was flourishing in his new environment. His magnifique play at flyhalf for Perpignan led to him being chosen as the Top 16 Player of the Year for the 2003-04 season. Edmonds has tongue firmly set in cheek when asked if he was chuffed winning that award.

“I would have been chuffed about five or ten years later,” he says. “Then they had a bit of prize-money or gave away holidays. I just got a trophy!”

“No, I’m very happy with it. That year was a really special year for myself and the club. We made the final after signing some really top players like Razor (Scott Robertson), Daniel Herbert and Dan Luger. It was a really, really good year for us.”

“I think I was lucky enough to play a type of rugby that suited my style. We had a really dominant pack that year which I benefited from. ”

Unfortunately, the lows would follow the highs for Edmonds. The following season he sustained a double leg fracture which consigned him to the sidelines for nine months. 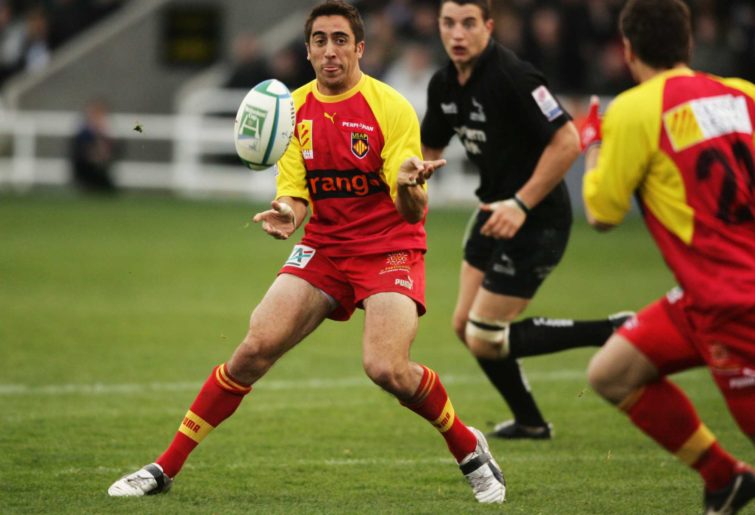 He would never quite regain his mojo with Perpignan after his return to the paddock. With an option to leave or stay at the conclusion of the 06-07 season, Edmonds elected the former and moved on to Bayonne.

He spent three seasons with the south-west French club who were a perennial mid-table team. His intention was to then hang up his boots and move into coaching.

Perpignan were keen on re-acquiring their old employee which they did through signing him as their A team coach. However, it did not take long for them to convince Edmonds into having one final season in the sun. With an injury to their starting flyhalf, he was drafted in as Perpignan’s oddly-named ‘medical joker’.

The Aussie played that final season, his eighth in France, while simultaneously coaching the club’s second XV. The following year he coached Perpignan’s academy team before departing to take up a role with Beziers.

He stayed four years with the Pro D2 side until an opportunity cropped up at Toulon. Edmonds only spent one season with the Top 14 heavyweights, which he admits was challenging but rewarding.

“Toulon was a big learning curve for me,” he says. “I came in as skills coach and ended up as backs coach.

“I probably came in a bit underprepared as a backs coach. When you’ve got guys like Ma’a Nonu, JP Pietersen and Bryan Habana in the backline you can’t make too many mistakes. I think I made a lot during the first few months then I got the hang of it and got a lot more organised as a coach.

“I just learnt so much from the players and their mindset and how they thought about the game. I coached Chris Ashton who had spent years at Saracens, then there was the South Africans and the Kiwis and the way that they see the game and position themselves in certain parts of the field.”

With a season coaching in France’s top flight under his belt, Edmonds then linked up with Oyonnax where he is now in his third season working in his current role.

Despite slipping slightly from second to fifth in the standings, Edmonds is hopeful that some continuity will lead to improved results during the upcoming season.

“The big problem before now at Oyonnax was the amount of coaching changes,” he says.

“I’m going into my second year with Joe so hopefully there’s a lot more stability this season and we’re a lot clearer on how we want to play.

“We’re really looking forward to a second year with the same coaches, same mentality and same messages which is important.”

Oyonnax is more town than city with just over 20,000 inhabitants. It is situated in central-eastern France on the river Ange. 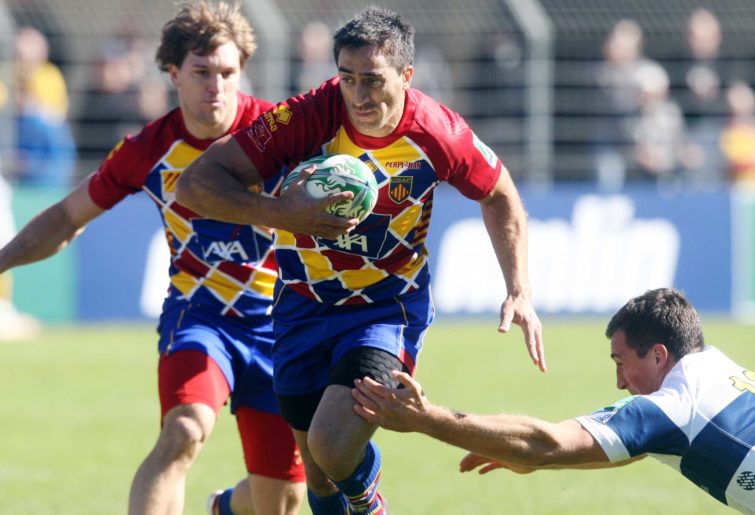 Edmonds is based there full time, but when he has the chance nips down to Banyul (near Perpignan) to recharge his batteries with his wife and daughters. He admits that after 18 years in the country he is now quite Frenchified.

“I’m probably more French now than anything,” he says. “My partner is French, my kids are French. When we’re all together we speak French.”

With deepening roots over in la Republique, Edmonds is unsure if he’ll ever return to Australian rugby.

“It was always a thought to come home for a few years and maybe learn a new way of seeing rugby,” he says. “I will never close the door on it. I’m always keen to develop as a coach, so you never know.”

Edmonds now looks almost professorial wearing his spectacles while speaking fluent French during television interviews. It illuminates just how long it has been since he strutted his stuff here down under.

Edmonds was always a crowd-pleaser. He could torture opposition defences with his sparkling footwork, cultured kicking and precise passing. He had a willingness to take risks and trust his instincts, which has arguably become a rarer trait among modern fly-halves.

“I was a ‘play to what I saw’ player,” he says. “I loved to run the ball but thought I was someone who could put somebody into space too.

“I just loved playing and the competition. I probably wasn’t the most professional person. I saw rugby not so much as a profession but more as a game.

“That’s probably why I enjoyed myself more over here. It wasn’t as structured as Aussie rugby back in the day. I found it tough to play to a sequenced game plan.”

Attacking, instinctive rugby was just want French rugby wanted, and just what Edmonds provided. His skill-set and playing style was compatible with French rugby, and anybody who saw Edmonds play can understand why he found his niche there.

But while he may have reached his greatest heights as a professional in France, Edmonds hints that he was in his happiest zone many years earlier when playing rugby as an amateur in Canberra.

It was in the days before his uncle lured him to Sydney to join Southern Districts. A time when he was not yet on the radar of Waratahs selectors.

Rugby then, for Edmonds, was all about having a run around with his mates every Saturday followed inevitably by a few cold ambers.

“I loved having a beer and still love it,” he says. “That generation of players probably changed in the mid-late 90s before Australia won the World Cup.

“I remember playing rugby at (Tuggeranong) Vikings and we used to call the downstairs bar ‘The Zoo’. For me, that was rugby. That was fun.”

No doubt the Oyonnax backs are now having plenty of fun playing under Edmonds. Unsurprisingly, the team scored the second-highest number of points in the Pro D2 last campaign. You can’t help but think there’s more than a bit of Manny Edmonds influence in that.

An influence that appears set to continue indefinitely. In less than two years Edmonds will bring up two decades in France. And with things still going swimmingly there, you can’t imagine they would be keen on letting go of their prised Aussie catch any decade soon.