Penrith not peaking too early

Penrith coach Ivan Cleary isn’t concerned his team is peaking too early as they gun for ten straight wins for the first time in the NRL club’s history.

The Panthers have claimed a club-record nine straight wins and are in the midst of their longest streak at the top of the NRL ladder since 1991.

But ahead of Friday night’s clash with Cronulla and with six weeks to play until finals, he’s not concerned about his team not timing their run.

“We’re pretty determined not to have to lose to learn lessons,” Cleary said.

“We’ve learned a bunch of lessons through this season. In the past nine weeks as well.

“We feel we have a lot of improvement left in us. Not huge jumps but enough to get us to where we need to get to at the back end of the year.

“Our consistency has been a window to how we prepare, how conscientious the boys have been about each opponent and what’s coming at us each week.”

Winger Brian To’o will miss Friday’s match, with the Panthers playing it safe on the 21-year-old’s return from an ankle injury.

It means Tyrone May will again play centres with Brent Naden on the wing.

Penrith flogged the Sharks 56-24 just five weeks ago at Kogarah in the highest-scoring game of the season.

But Cleary has no interest in seeing any kind of repeat at Panthers Stadium.

“It was one of the ones I look back on and didn’t like that much.

“The big story that day was Charlie Staines scoring four tries on his debut. But I think defensively we were pretty ordinary.

“It seemed like a bit of a schoolboy game. It’s not really the style of game we want to repeat and fortunately we haven’t since then.

“I’m looking forward to a much tighter and stronger defensive display, which we’ll have to with the Sharks being one of the best offensive sides in the comp.”

Ennis has called for Dylan Edwards to be replaced as Panthers fullback by Stephen Crichton. 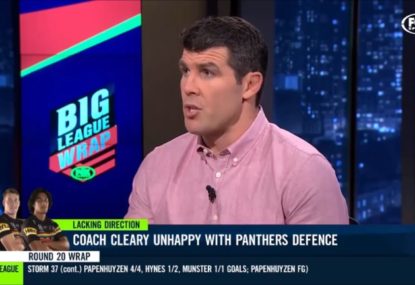 The rescheduling and changing Round 20 means you’re getting your talking points with two games still to be played, but it’s that kind of season.

The Storm was desperate not to let the Panthers score, with Cam Munster’s strip allowing the Storm hooker to get his hand under the ball to prevent Liam Martin from scoring. 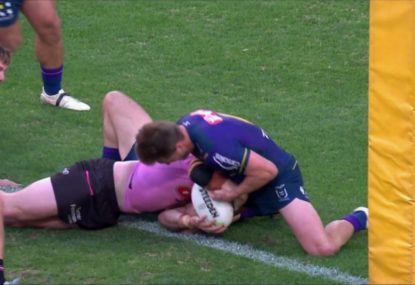 What can't he do? The Fox stuns with a pinpoint accurate crossfield kick for a try

It left one of the game’s best-ever kickers in Peter Sterling massively impressed. 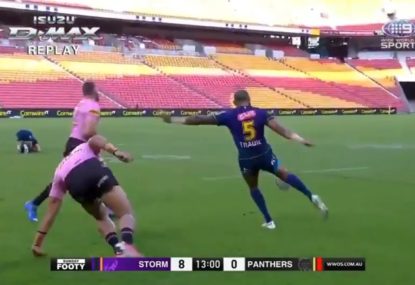 What can't he do? The Fox stuns with a pinpoint accurate crossfield kick for a try

However, it only delayed the inevitable, with the Storm crossing moments later. 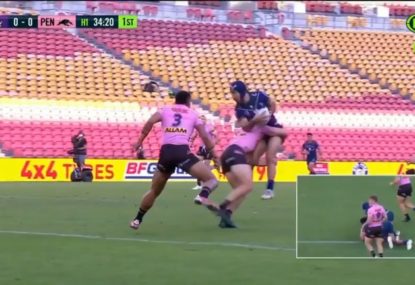 A pair of blockbusters will serve as finals previews in Round 20, with just six weeks to go until the NRL finals. This is The Roar’s NRL expert tipping.