As some semblance of normality returns to this week’s footy fixture, provided they play, these players will all add something to the historical fabric of the game.

Adelaide’s Ben Keays has now endured 11 losses at the club that he moved to at the start of this year after four years at Brisbane where he endured a run of ten losses before being part of a winning team at the Lions. He has now played 41 games for only six wins, and never more than two in any year. His win-loss ratio is 14.63 per cent and doesn’t appear likely to improve much in 2020. Teammate Taylor Walker will play his 200th game, becoming the 18th Crow to do so.

Brisbane’s Oscar McInerney will play his 50th game for the Lions since starting in Round 6 2018 as the 199th player for the club. The Big O has proved to be a handy goal scorer as well.

Carlton’s Kade Simpson will continue his move up the AFL all-time list, moving ahead of John Rantall and St Kilda’s Nick Riewoldt. He will be wearing his famous number six jumper as he has done in more AFL games than any player except the Bulldogs’ Brad Johnson. He will also be hoping that he is joined in the game by Marc Murphy as it will be their 271st game together, meaning there have been only eight partnerships of more games in the history of the league.

At Collingwood, if Jack Crisp plays it will be his 135th consecutive game in a run that started with his last four games at Brisbane in 2014. In a season where he has already played a series of four games in two weeks in three different states, managing to keep the streak running is an unbelievable effort as no other current player has played more than 89 games in a row – the equivalent of nearly two seasons less. If Jaidyn Stephenson is given another chance, it will be his 50th game for the Magpies.

At Essendon, it is appropriate in this Doug Nicholls Indigenous Round that Anthony McDonald-Tipungwuti can claim ownership of the number 43 jumper, passing fellow Bomber Dean Rioli, who played exactly 100 games in that number in his career, which finished in 2006. James Stewart, after four years at Greater Western Sydney and three years at Essendon, will eventually play his 50th AFL game, if selected.

Fremantle’s Matthew Taberner – who has already had his best year as a goal kicker at the club in his eight seasons there – will be hoping for four goals to make him the Dockers’ 18th centurion or at least two goals to make him equal with former great Aaron Sandilands.

Geelong captain Joel Selwood should play his 306th game, which would take him into third position on the club’s games played list. Harry Taylor will match James Kelly’s games total for the club, and how will coach Chris Scott feel about Mitch Duncan equalling his tally of 215 AFL games for Brisbane in the number 22 jumper?

Gold Coast’s increasing maturity as a club will be highlighted by David Swallow becoming the second Suns player to achieve 150 games on Friday night.

At Greater Western Sydney, Nick Haynes will equal Adam Tomlinson’s games tally of 140 games for the club meaning that the eight top game players at the club are all still playing for the Giants.

At Melbourne, the two recent entrants to the Demons’ top 100 game players list will move further up the list and leave behind Charlie Young, who kicked two of the six goals scored by Melbourne in the club’s first league game: a win against South Melbourne at the Lake Oval in 1897.

An injury-decimated North Melbourne will still be able to celebrate Robbie Tarrant’s move up the top 100 games player list by passing the tally of 1950s and 1960s champion Ken Dean. 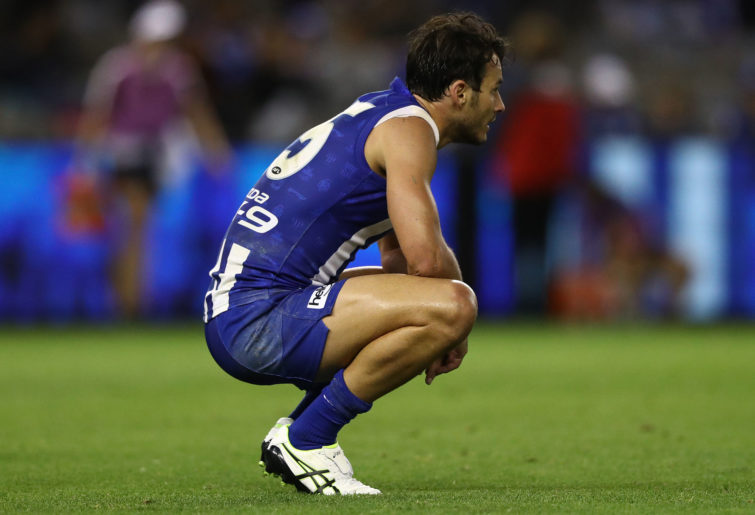 Tom Rockliff’s 200th game at Port Adelaide will see him join a group of only five players in the history of the game who have played 200 games without playing in a final! Of course, Rockliff will be hoping he plays out the rest of the home-and-away season (and moves ahead of Hawthorn’s Ted Pool and Melbourne’s Steven Smith on this list) but then plays in his first final and becomes ineligible for this distinction, and instead joins the list of eight players who had to wait over 200 games for their first final.

Richmond’s Nathan Broad has a different situation. If Richmond wins this weekend, his win-loss ratio will be only 0.22 per cent outside the best 20 win-loss ratios of all time. Currently the only Richmond player in this top 20 is Doug Strang, who had a career total of 51 wins, one draw and 12 losses – almost identical to Broad’s current record of 51 wins, one draw and 14 losses.

At St Kilda, the club’s most senior current player and captain Jarryn Geary will move past the legendary Wels Eicke, who was born in the late 1800s and played at the club from 1909 to 1915, 1918 to 1924 and again in 1926. During his footy journey, Eicke created the record for the most number of teammates with whom he played.

At Sydney, Luke Parker will match the game tally of Mark “Napper” Tandy, a rover who was a former captain and 1918 premiership player.

At West Coast, Shannon Hurn will fly above the pack to take the outright mantle of the greatest games player in the number 25 jumper away from the great “Jezza”, Alex Jesaulenko, who wore it in 279 games for Carlton and St Kilda.

At the Western Bulldogs, their most senior player and former captain Easton Wood will go level with former St Albans boy Steven Kretiuk, who despite injuries gave the Bulldogs good service up until 2003.