The Inter forward deflected Diego Carlos’ overhead kick into his own net for Sevilla’s winning goal in the 74th minute, after a game-long duel with the Brazilian defender.

Diego Carlos had fouled Lukaku in the third minute, conceding a penalty for the third game in a row, and was perhaps fortunate to avoid a red card.

“This group deserve this. We’ve been fighting all season and getting over the problems that we’ve encountered,” said Sevilla’s Jesus Navas, who won his third Europa League with Sevilla – 14 years after his first.

The loss extended Inter’s wait for a first European trophy since Jose Mourinho led the Italian club to the Champions League title in 2010.

“I think Sevilla were more tired than us in the final part of the game but they had this chance, the ball was deflected by Romelu’s foot and went in. It happens,” Inter goalkeeper Samir Handanovic said.

Sevilla received the trophy they know so well in an empty stadium on Friday at the conclusion of the coronavirus-enforced mini-tournament in western Germany. 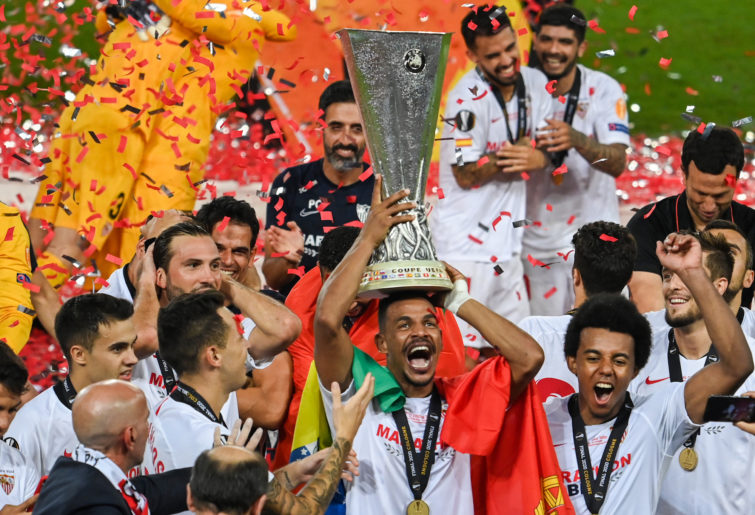 The game started at breakneck pace despite being the 54th game of 2019-20 for both teams in a season extended because of the coronavirus pandemic.

After just three minutes Lukaku surged away with the ball when a Sevilla attacking throw-in was cleared, and Diego Carlos pushed him down as he prepared to shoot.

Goalkeeper Yassine Bounou could do nothing to stop Lukaku’s powerful penalty kick into the bottom-left corner.

The lead lasted just seven minutes before Luuk de Jong levelled the score with a diving header off a cross from right-back Navas.

De Jong was rewarded with a start after scoring the winning goal as a substitute against Manchester United in the semi-finals.

The Dutch striker put Sevilla in front 2-1 with a header at a free kick in the 33rd, but Inter defender Diego Godin responded with his own headed goal three minutes later.

After Sevilla reclaimed the lead, Jules Kounde stopped Inter leveling once again when he cleared substitute Alexis Sanchez’s shot off the line in the 82nd.

In a season defined by the coronavirus pandemic, Sevilla finished with a player on the field who had his own season disrupted by a positive test for COVID-19.

“My emotion is very big because we have worked very hard and we deserved to win against a fantastic team like Inter,” Sevilla coach Julen Lopetegui said.