There’s also a bunch of teams fighting for increasingly limited up-for-grabs top eight spots. Such is life in 2020 footy.

1. West Coast (last week: 3)
The new ranking leaders. Eight wins in a row, and off to Queensland (again). This was a genuinely superb win over the Giants – how good is Nic Nat? – but the real test comes in Hub 2.0. Reminder: they hold a 2-3 record playing away from Perth this year.

2. Port Adelaide (last week: 1)
Honestly not sure if this was Port almost being Port, or Hawthorn being unexpectedly competitive. Either way, the ladder leaders got a hell of a fright from a lowly team. If not for the Eagles – and given Geelong’s win was similar in nature – they would have kept their place atop these rankings.

3. Geelong (last week: 2)
Like the South Australians above them, they got a fright from a (very) lowly team. The Cats face a more difficult challenge on Friday against the (perhaps good again?) Bulldogs, but remain a win adrift of the ladder’s current top two.

4. Richmond (last week: 5)
A win that honestly should’ve been much, much bigger than the 12-point margin it ended up being. Umpiring controversy and staging blighted the game, but the Tigers nonetheless earned a vital four points to keep them in touch with the top four.

5. Brisbane Lions (last week: 6)
A promotion in the ratings because of the win over the team directly below them. But – and I think I’ve commented on this in this column a half dozen times already this year – their goal accuracy is a proper blight on their game. Needs a fix, urgently.

6. St Kilda (last week: 4)
The only thing I dread more than most Freo matches are Saints matches. The last few minutes of Sunday’s clash were pretty tense, but I don’t think the Saints should feel too bad about the loss: they remain comfortably in the eight, and Brisbane are hard to play at home.

Can’t afford to slip up against the Dees or Hawks though.

7. Collingwood (last week: 9)
They secured the win and looked better than the previous few weeks, but I’m no closer to believing they’ll be a force in finals – or even make the eight at all. Need to see much more.

8. Carlton (last week: 12)
A promotion here, but they mustn’t replicate the Demons – they last team to get a bounce like this in this column. That’s two in a row for the Blues, but they have to run the gauntlet to make the top eight. Collingwood and the Giants are the next two for the Blues. Incredibly important games.

9. Western Bulldogs (last week: 11)
They’re back within the eight, but a very tough draw remains. Geelong and the Eagles their next two in make or break fashion: lose both, and their finals chances can quickly evaporate.

10. Melbourne (last week: 7)
Oh no. What a way to undo a few weeks of excellent work. I don’t have too much to say here; it makes me look silly promoting them so quickly though.

11. GWS Giants (last week: 8)
A much, much better effort than against Sydney, but still thoroughly outclassed by the Eagles. Leon Cameron’s squad now a game out of finals contention. Gut feel: they won’t make it.

12. Fremantle (last week: 14)
Felt good to see my boys bounce back. Defensively incredible, and I’ll join the chorus: if Luke Ryan misses out on an All Australian spot, a large injustice will have occurred. In best form, 3-2 an optimistic result for the remainder of the season. 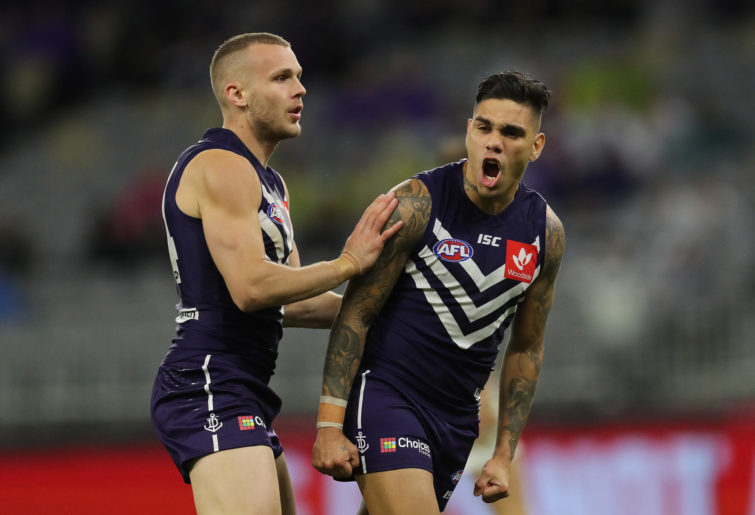 13. Gold Coast (last week: 10)
Probably had them a little too high, but I don’t want this drop to disparage the youthful side. The door to finals just about slammed shut with their disappointing loss to Carlton, but they’re still having their best year in ages. I’ll back the club to bounce back against North next week.

14. Essendon (last week: 13)
Credit where credit is due, the Bombers looked competitive for a lot of the clash. But they were ultimately outclassed by Richmond, and while there was – again – some umpiring queries, they lost a game they were expect to lose. End of.

15. North Melbourne (last week: 16)
Not a lot to report from last night’s clash. North’s performance wasn’t awful per se, but still outclassed by who were a vulnerable Magpies outfit. Very, very ‘meh’.

16. Hawthorn (last week: 17)
Like Adelaide below them, a genuinely good performance against a top contender. Also like the Crows, they weren’t able to secure the upset. They face Essendon on Thursday night. Talk about a 50/50 clash!

17. Sydney Swans (last week: 15)
Horrible. So much goodwill after their upset win over the GWS, which many presumed could have carried over into Saturday’s game. Instead, they fell to one of their lowest scores ever. A date with the ladder leaders next weekend.

18. Adelaide (last week: 18)
Their best game of the year, but the Crows’ were unable to cause what would’ve been a big, big upset. Hawthorn in a fortnight arguably their best chance to garner a win for the year. Play like they did on Sunday and they’re a chance.