One step at a time towards Jemima Montag's Tokyo dream

Four years ago, Jemima Montag and her family took a trip to Tokyo. With the results of the Rio Olympics firmly in mind and while touring the stunning city, Jemima’s younger sister asked her for something.

“Wouldn’t it be great, Jemima, if you did us all a favour and tried to qualify for the Tokyo Olympics so we can all come back to Tokyo?”

In that moment, Montag didn’t take her sister seriously because she didn’t know where to start. But fortunately, she had a strong support network around her who reminded her of what she could achieve when she put her mind to it.

“Mum told me she believed I had what it took and that if I decided I wanted to pursue the green and gold dream at a senior level, that she thought I could. My mum also reassured me that my family would be there every step of the way. And they have been,” says Montag.

“That was the moment the spark was reignited.”

Four years later, Montag has qualified for her first Olympic Games and will represent Australia in race walking in 2021.

This is a significant achievement in itself, but even more so when you consider that during high school, like many other young women, Montag gave up on sport.

As a child, Montag was involved in Little Athletics with her two younger sisters. In Little Athletics, Montag had the opportunity to try many disciplines and it wasn’t long before she realised that the power and sprint-based events were not for her.

But the longer running and the race walking events appealed to her, helped by the fact that she won a couple of medals.

“I think as a kid, if you can win a ribbon or a medal at the local opening day and stand on the podium, it is really exciting,” said Montag.

“You dream at that point of going to the Olympics, just like all the other kids, but you don’t really believe you’ll get there or understand how hard it is to pursue a dream like that.”

In those earlier years when she was competing as a junior, success came easily to Montag. It was once she started competing at a senior level that it got a bit tougher because of some barriers to participation for young women.

“No longer were you a growing girl who would rock up to the track and do a personal best just because you had grown an inch. All of a sudden there was a bit of a plateau in performance, along with puberty and not really understanding what was happening to my body,” says Montag.

“It was confusing. The boys were getting taller and stronger and it felt like we were getting all the hard changes like having to come to terms with getting a period”.

“I remember that because I didn’t understand the physiology of my body and how to work with my body, you end up really thinking of the menstrual cycle and the other changes as a real burden and almost wish them away.”

“It felt like the only things I was associating with sport were anxiety and nervousness and not really feeling like I belonged anymore.” 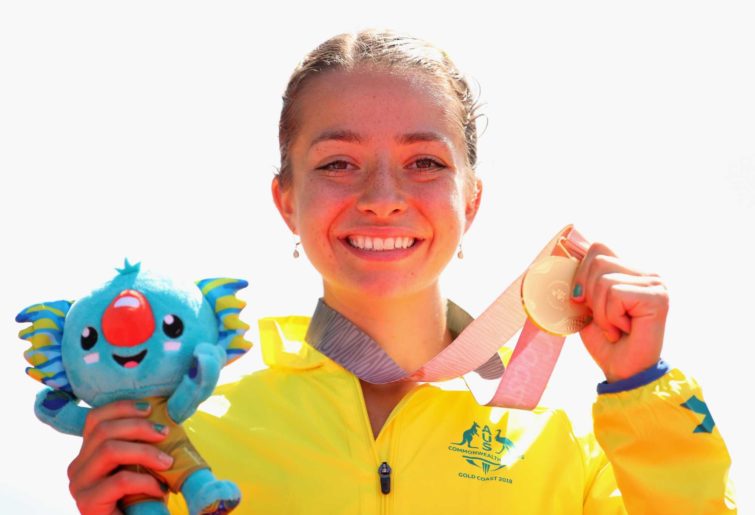 That led to a lull in motivation for Montag. Halfway through year 11 she made a decision to focus on her study and put that first. Whilst she still had a passion for sport, she didn’t know whether that passion would push her to compete at an elite level. Self-doubt was at an all-time high; until that moment with her sister in Tokyo.

Even though Montag faced challenges in high school due to her gender she continues to be encouraged by the power of the women in sport movement right now.

“Whilst we are part of an incredible generation for women in sport in general, it wasn’t always this way,” says Montag.

“It has been so exciting to see the announcement that Australia will be hosting the 2023 FIFA Women’s World Cup after the success of the Aussie women’s cricket team at the start of the year with that record-breaking crowd.”

But more importantly for Montag, there is increasing research in women’s bodies and in particular, how women’s bodies are different to men and how tracking a menstrual cycle properly can affect performance.

The Brisbane Lions AFLW team have been tracking the periods of their squad since the beginning of the AFLW to understand how different players respond to training methods and nutrition.

Whilst many female athletes think that missing a period is the norm, it can be a signal of an energy deficiency known as the Female Athlete Triad.

For Montag, it’s important that research continue to be done in this space to ensure that young women grow up loving and respecting their bodies for what they can do physically, which will hopefully encourage more young women to remain physically active.

“I’m so grateful that I started working with a sports dietician from the age of about 20 and I think we need it even earlier so we can keep those girls in sport,” says Montag.

Whilst qualification does give Montag some certainty in a very uncertain world, being based in Melbourne has certainly posed some challenges.

Montag is a racewalker and in more normal times, would cover up to 100 kilometres outdoors. With the latest stage four restrictions for Melbourne city though, Montag has only been able to leave her house for an hour a day for exercise and remain within a five-kilometre radius of her home.

That has meant that her and her treadmill have become very well acquainted.

“I am getting to know my treadmill very well.”